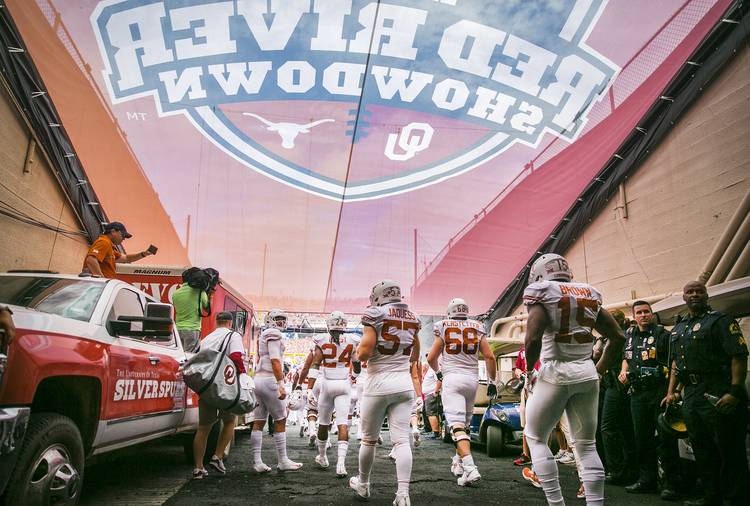 The Texas Longhorns take the field against Oklahoma in the Red River Showdown last week at the Cotton Bowl in Dallas. Texas won 48-45 (Photo by Ricardo B. Brazziell/American-Statesman)

Teams usually spend the first month of the season searching for an identity. The Labor Day mystery is usually solved by Columbus Day. If it extends through Halloween, chances are you won’t like the answers.

October is the month where teams come to grips with who they are and either rise or fall accordingly. Ninth-ranked Texas is no different.

The Longhorns won’t dazzle you with gaudy statistics, nor will they necessarily leave you breathless. Right now, that’s what it takes to make the Saturday night highlight shows. But if nothing else, Texas (5-1, 3-0 Big 12) will leave you with a swollen jaw and bloody lip, something the data crunchers can’t quantify.

No offense to Baylor coach Matt Rhule and all the Bears fans that’ll travel down Interstate 35 on Saturday, but Texas isn’t thinking about Baylor (4-2, 2-1) all that much, if at all. The Longhorns are laser focused on becoming the best version of themselves.

“If we do play our best,” Texas coach Tom Herman tells his charges, “our best is good enough.”

This is Texas right now: A team that’s overcoming its deficiencies through brute force.

For those with doubts, see Lil’Jordan Humphrey’s 19-yard catch on third-and-21 against Oklahoma as a prime example of what the 2018 Longhorns are all about. The one word to describe that play and this program, left tackle Calvin Anderson said, is “tough.”

“We have guys playing through injury or nicks and dings. It just doesn’t matter,” Anderson said. “When we’re in the game or in practice, those things don’t matter. Guys will look past that for the greater good of the team. So I would say our offense is characterized by toughness.”

The Longhorns have yet to produce a 100-yard rusher. Yet, it’s a group that closed out four straight wins in the victory formation by running opponents into the ground. Daniel Young’s lower-your-shoulder-and-go, 30-yard strike against Tulsa was a sign of things to come.

Through six games, Texas holds the ball an average of 8 minutes, 29 seconds in the fourth quarter. That includes a 10-minute, 14-second edge against Oklahoma. Granted, OU’s Kyler Murray almost rendered that meaningless, but Texas held on for the win.

It’s an offense that doesn’t hit home runs, but the Horns move things along.

UT’s longest offensive play this season has gone for 47 yards. That doesn’t look too impressive at first glance. But consider this: Texas had 19 offensive plays that went 30 yards or more throughout the 2017 season. This fall, the offense already has 12 and counting. Humphrey and fellow receiver Collin Johnson have combined to catch 17 passes that have gone for 20- to 40-yard gains. It’s possible that both can finish the season with 1,000 yards, something that hasn’t happened since Jordan Shipley and Quan Cosby reached the mark in 2008.

“I think we’ve hit big plays,” offensive coordinator Tim Beck said. “Now, maybe they’re not the 80-yard touchdowns. But we’ve had more of the 20- to 40-yarders, more so than last year, which allows you to get some rhythm and changes the field position on one play.”

It’s hard to gauge where the defensive numbers will end up, but they are trending in the right direction. Last season, opposing rushers averaged 3.0 yards per attempt; they’re getting 3.9 this season. Texas had 16 interceptions last year. The defense has seven so far in 2018.

“We always each week want to be the most physical team in the Big 12,” safety Brandon Jones said. “Usually the more physical teams end up winning more games.”

Defensive coordinator Todd Orlando could tell in the spring that this would be a physical unit.

“That’s probably us as a program now,” Orlando said. “Our calling card has to be that. Our toughness and hardness give us a chance to win every ball game if we can go out there and execute.”

Herman spoke this week about a book he read years ago written by Brian Billick, a long-time NFL coach. The book “Developing an Offensive Game Plan,” published in 2001, has a lot of insider knowledge meant specifically for coaches and how they can best relate to players. One intriguing passage is Billick’s four metrics for success — turnovers, explosive plays, first-down efficiency and efficiency inside the opponents’ 20-yard line.

Based on those key areas, Texas is doing OK. The Longhorns are tied for 18th nationally in turnover margin (plus-5). Johnson and Humphrey are working on explosive plays. Texas is averaging 5.52 yards per play, a bump from last season’s 5.15. Third-down conversions need to be better; the Horns average 41.6 percent, which is seventh in the Big 12.

And the OU win boosted the team’s numbers inside the 20. Texas went 5 for 5 and now boast a 72.6-percent season success rate. It’s still not great overall; that figure ranks ninth in the Big 12.

All that said, Texas is one win from becoming bowl-eligible before mid-October; the Longhorns haven’t been bowl-eligible after seven games since the 2009 season. That’s a welcome change from the last four years when Texas battled to get to six wins up until Thanksgiving.

“I haven’t really sat down and thought about it,” senior tight end Andrew Beck said. “But that is exciting.”

The local 11 may not be ready for Alabama yet, but they’re on the right path. This team’s identity right now is one showing continual improvement.

Saturday’s game at Royal-Memorial Stadium will be the first time a top-10 Texas team has played at home since September 2010. On Thursday, school officials said about 3,000 tickets remained. Don’t blame ACL, either. There’s plenty of time to attend a 2:30 p.m. football game and get to Zilker Park by dusk.

After the Baylor game comes a much-needed bye week. Then Texas faces a difficult five-game stretch to close out the regular season.

Herman thanked the Texas student body for making the first three home games a strong home field advantage. “I’m excited as heck to get back out in front of ’em,” he said.

And fans should be excited to watch this team’s weekly progression. The Longhorns know they need to get better and want to.

“Just because you beat a team and you scored 48 points doesn’t mean you’ve arrived or played a perfect game,” quarterback Sam Ehlinger said.

The Dotted Line: Only seven uncommitted prospects remain on the Fabulous 55