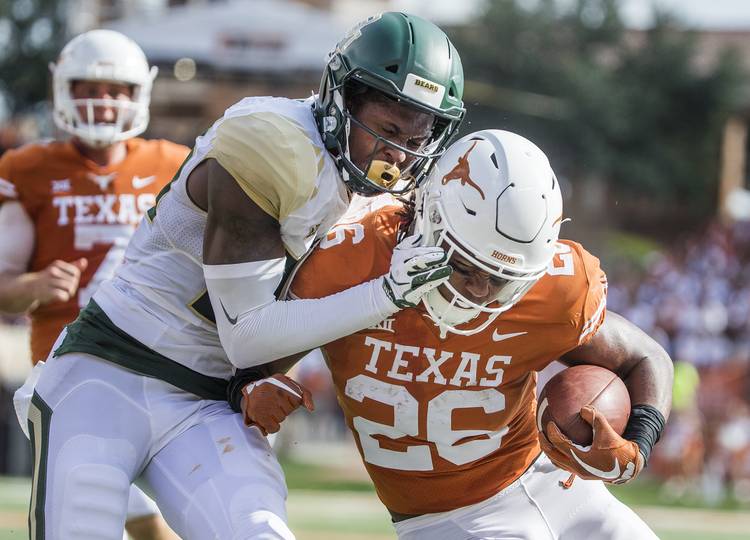 A career day for Texas freshman running back Keaontay Ingram was also a recent rarity for the Longhorns’ ground game.

Ingram ran for 110 yards in UT’s 23-17 win over Baylor. Ingram’s performance halted a 17-game skid among UT running backs. Texas last received a 100-yard performance from a running back during the second week of last season when Chris Warren III ran for 166 yards against San Jose State.

Texas quarterback Sam Ehlinger had 106- and 107-yard outings on the ground in 2017. Former running back D’Onta Foreman closed out the 2016 season with his 13th consecutive 100-yard game.

“To me, it’s just another day in the office,” Ingram said. “My job is to run it and trust my offensive line. Gap-to-gap and play my role.”

Texas started Tre Watson against Baylor and didn’t give the ball to Ingram until its third drive, which started in the second quarter. About Ingram’s late start, Texas coach Tom Herman told reporters afterward that “I think it’s just a matter of keeping both guys fresh.”

Ingram still ran for 56 yards over eight touches before halftime. He then broke loose on a 30-yard run on one of his six carries in the third quarter. Two of Ingram’s five fourth-quarter touches were on UT’s last possession of the game.

For the game, Ingram recorded a career-high 19 carries.

A four-star recruit from Carthage, Ingram has now rushed for 403 yards in a season that has been slowed by hip and knee injuries. Averaging 6.1 yards over his 66 carries, Ingram is 97 yards away from becoming the 16th freshman to run for 500 yards at UT. Cedric Benson is the only Longhorn to exceed 1,000 rushing yards during his first year in college.

“The dude just reacts and runs,” Texas quarterback Shane Buechele said. “He has places where he needs to grow, but as a freshman, it’s hard to play running back here. I’m definitely happy to see what he’s done and what he did today.”

Texas has seven scholarship running backs on its roster, but Ingram and Watson were the featured backs for a second straight week. Watson, a graduate transfer from Cal, ran for 41 yards on 13 attempts against the Bears. Ehlinger and Buechele ran it seven times. Receiver Lil’Jordan Humphrey scored on one of his two carries.

Collin catches fire: Collin Johnson led all receivers with his 11 catches. His 132 yards were also a game-high. One of the junior’s catches — and 44 of his yards — were accounted for on a second-quarter touchdown catch.

The score gave Johnson a touchdown catch in his fourth straight game. That is the fifth-best streak in school history, tying a run by Jordan Shipley in 2009 and John Harris’ 2014 stretch of success. In 2008, Shipley caught a touchdown pass in a school-record eight straight games.

Heisman honored: Between Saturday’s first and second quarters, Texas observed the 20th anniversary of Ricky Williams winning the Heisman Trophy. A video was played during the short ceremony. With the Heisman in hand, Williams was then recognized on the field.

During the 1998 season, Williams ran for a school-record 2,124 yards and 27 touchdowns as Texas went 9-3. The 2,355 points compiled by Williams on the Heisman ballot crushed a field of quarterbacks that included Kansas State’s Michael Bishop (792 points), UCLA’s Cade McNown (696) and Kentucky’s Tim Couch (527). Williams claimed UT’s second Heisman Trophy, but no Longhorn has finished higher than second place in the voting since.

Baylor was among the teams that Williams ran over that fall. Williams compiled 259 yards and two touchdowns over 39 carries against the Bears in a 30-20 victory. He also produced a 200-yard game when the Longhorns traveled to Waco in 1997.