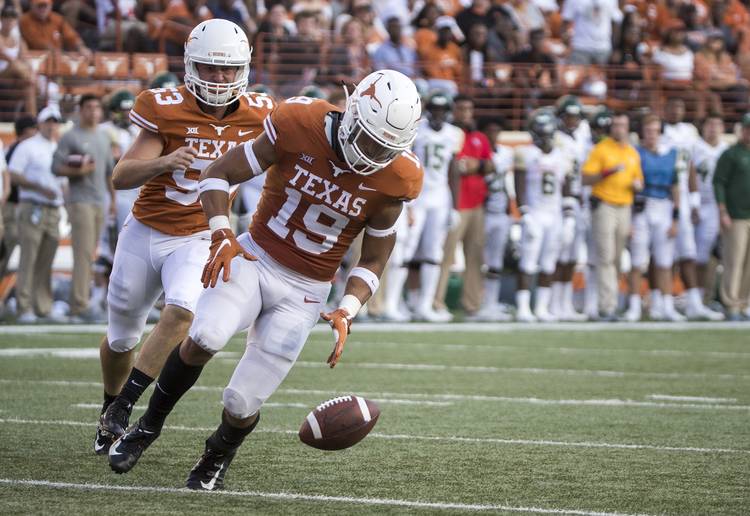 Texas safety Brandon Jones (19) downs a punt on the 3-yard line during the fourth quarter against Baylor at Royal-Memorial Stadium on Saturday. [RICARDO B. BRAZZIELL/AMERICAN-STATESMAN]

There were 154 snaps taken in then-No. 9 Texas’ 23-17 win over Baylor on Saturday. Here are five that ended up making a big difference:

Texas opened the game with the football, and sophomore Sam Ehlinger needed 10 plays to direct the Longhorns from their 25-yard line to the Baylor 27. After Tre Watson ran 3 yards on a fourth-and-2, Ehlinger left the game when blood was spotted on his hand. Ehlinger was later evaluated for a shoulder injury and ruled out for the rest of the afternoon.

He was replaced by Shane Buechele. The junior had started 19 times during the 2016 and 2017 seasons, but he had not played since the 2017 Texas Bowl. Buechele was flagged for a delay of game penalty upon entering, but he completed a 3-yard pass on his first snap.

Behind a 19-yard touchdown pass by Charlie Brewer and Connor Martin’s 46-yard field goal, Baylor build a 10-6 lead with 5 minutes, 3 seconds left in the first half. That deficit could have been worse for the Longhorns, though.

Facing a third-and-10 on the Texas 27 in the second quarter, Brewer found a receiver in the end zone. Freshman Tyquan Thornton dove for the catch but was unable to hold onto the football. The four-star recruit and ex-Florida pledge was attempting to secure his third touchdown catch of the year. Instead, Baylor had to settle for Martin’s kick.

The go-ahead play served as an on-field reunion for Buechele and Johnson, who are roommates off the field. In his first two years on campus, Johnson’s five touchdown catches were on throws by Buechele. That included a two-touchdown performance at Texas Tech in 2016.

Johnson has now caught a touchdown pass in four straight games, which is tied for the fifth-longest streak in school history. The junior finished the game with 11 receptions and 132 receiving yards.

Texas scored 10 points over the final 72 seconds of the first half to extend its lead to 23-10. UT went scoreless in the second half as it had three drives thwarted by two missed field goals and an interception.

Raleigh Texada’s interception of Buechele led to a six-play touchdown drive by Baylor in the third quarter. The interception was the first thrown by a Longhorn since UT’s last offensive snap in a 34-29 loss to Maryland on Sept. 1. Texas threw 195 passes between those two interceptions.

Texas held on to its six-point lead for the rest of the game, but Baylor had one final chance to rally in the fourth quarter. After Brandon Jones downed a Ryan Bujcevski punt at the Bears’ 3, they were left with 97 yards of field in front of them, 1:43 on the clock and no timeouts available.

But Brewer, a Lake Travis graduate, drove the Bears to the Texas 17 in the waning seconds. Baylor had three shots at the end zone, but all three of Brewer’s passes fell incomplete. Baylor’s last snap came with a second remaining, and Brewer sailed a throw past a heavily guarded Jalen Hurd in the back of the end zone.

A view of the last play of the Texas/Baylor game from “press row.” #HookEm pic.twitter.com/iVl73fhkXb

Jones said of the last-minute defensive stand: “We just train for chaos. We train for moments like that. We have (a) two-minute drill every single day at practice. The outcome always comes good when we trust our abilities and do what we were coached to do.”