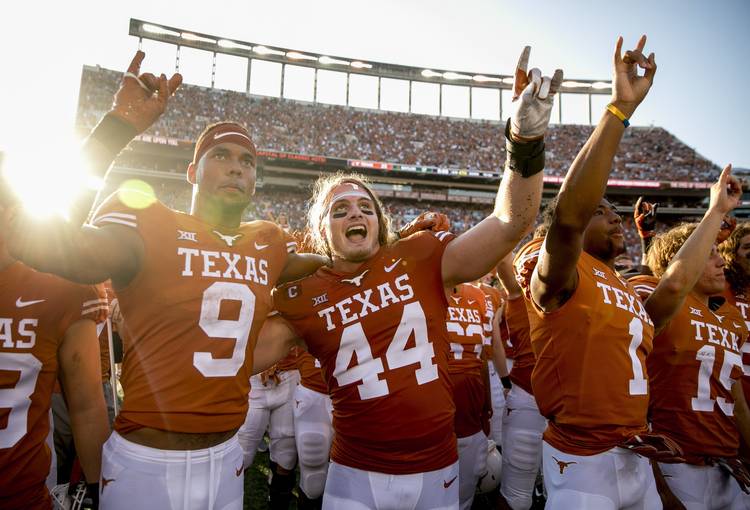 Before you laugh, think about what a monumental struggle it’s been to win six games each of the past four years. Looking back, it’s obvious how those within the Texas program once took winning for granted, as if it were ordained.

Well, maybe on some level, it was. Texas and Georgia are tied for second all-time with 54 bowl appearances each. Alabama has 68.

That 2014 team, coach Charlie Strong’s first, didn’t win its sixth game until Nov. 15. Took a late-season three-game winning streak to do it, too.

Remember that chilly 40-degree night at Oklahoma State? The one on which Strong told the players to take off all those silly long-sleeved shirts? “They thought it was cold, and I told ’em it isn’t cold,” he said at the time.

The Longhorns celebrated that 28-7 win in full force. “We made it. We’re bowl-eligible,” defensive end Cedric Reed said.

“After the game? It was rowdy,” linebacker Malik Jefferson said. “I’m surprised y’all didn’t see it yet? It’s not on Twitter and everything?”

Reflecting back on that moment Saturday, second-year coach Tom Herman had instant recall.

Saturday’s 23-17 win over Baylor was Texas’ sixth straight win this season and pushed UT up to No. 7 in The Associated Press Top 25 poll.

The Longhorns (6-1, 4-0 Big 12) have the week off, so they’ll sit alone atop the Big 12 standings for two weeks. Texas does not play again until traveling to Oklahoma State on Oct. 27.

There’s not a single Longhorn who would be happy with just making a bowl game this season. This team now has larger goals in mind. With five games left, Texas controls its own destiny in the quest to reach the Big 12 championship game.

“No, I don’t think they even know in there,” Herman said. “I don’t think that not going to a bowl game crossed anybody’s mind when this season started.”

For those who have been around the past few years, they should at least appreciate the struggle and how far the Longhorns have come.

“Oh, wow,” junior receiver Collin Johnson said. “Man, it shows just Coach Herman bringing that 1-0 mentality here. When you really focus on that, we blink and we’re sitting here bowl-eligible already. But that’s not our end goal, obviously, but that’s definitely a step.”

Quarterback Sam Ehlinger had an MRI on Sunday and doctors said he had a first-degree shoulder sprain, according to UT. It’s unclear how long he could be out, but Herman said the injury wasn’t supposed to be a season ender. Two weeks is a lifetime for a quarterback who’d rather cut his arm off than miss games.

Herman said after the Baylor game that from what he’s been told Ehlinger could start throwing by the end of this week.

Backup Shane Buechele stepped into the huddle on Saturday and guided the Horns to victory after Ehlinger left on the first possession. He completed 20 of 34 passes for 184 yards in a performance that was signature Buechele.

“I’ve been with them for three years,” he said. “That’s the least I could do is stay ready for times like this.”

The road back to respectability has been difficult. The Horns will spend two weeks getting pats on the back for a job well done. Players must ignore all that talk, though.

“As soon as you lose, people aren’t patting you on the back,” Johnson said. “That’s the way it should be. But at the same time, when you get W’s, you do get pats on the back. So keep level-headed. Thank ’em. But just know it’s not over. You can’t celebrate a whole two weeks. For what? The game’s over with.”

Herman would be proud of how Collin Johnson stayed on message.

“You can’t really avoid it,” the receiver said of outside distractions. “You just have to tune out what you need to tune out. My thing is listen to the coaches and your teammates, because I feel like at the end of the day, that’s the only opinions that matter.”

A UT spokesman said the coaching staff is expected to hit the recruiting trail this week. Typically, players will practice for several days and then get Friday and Saturday off. This team has earned and needs rest.

The Horns just can’t rest on their laurels.

“We need to heal. We’ve been playing football for 11 straight weeks, and the guys need to take a nice, deep breath, exhale and get ready to come to work on Tuesday,” Herman said.