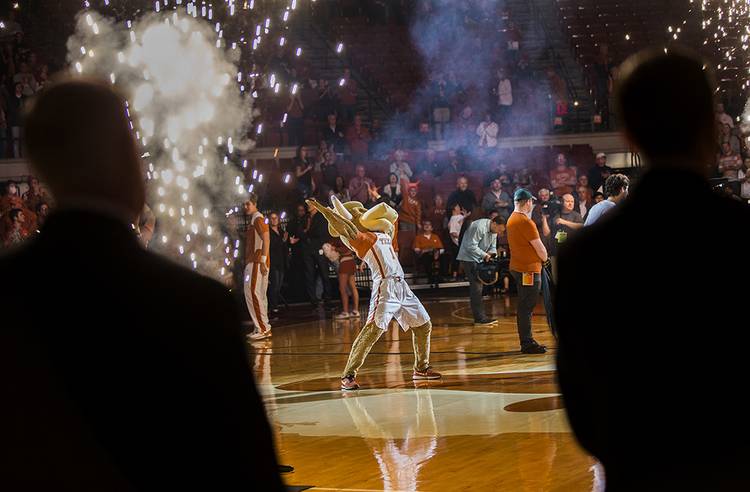 Texas' Hookem mascot get the fans ready for the game against Iowa State at the Erwin Center last season. Texas' men's and women's teams will scrimmage for fans on Wednesday night at Gregory Gym. (Photo by Ricardo B. Brazziell/American-Statesman)

The Texas Tip-Off event on Wednesday at Gregory Gym is the public’s first chance to examine the UT men’s and women’s basketball teams.

Doors open at 6 p.m. Admission is free, but the place holds only 3,000 so don’t dilly-dally. The women’s team will scrimmage for 10 minutes. Players will challenge each other with 3-point shooting and dunk contests. And the men will scrimmage for 12 minutes.

It’s the modern version of midnight madness. It’s also the first time both teams have staged a preseason event together. Women’s coach Karen Aston asked if her team could participate, and men’s coach Shaka Smart was all for it. “His answer was that’s a no-brainer,” Aston said.

There’s an autograph session afterward and a silent disco, a light-infused student rave that’s been a huge hit after football games.

Now with those particulars out of the way, fans can start thinking about how to gauge these two squads.

Aston’s club may have to initially play with smaller lineups due to Joyner Holmes’ ankle injury and Sedona Prince’s broken leg. Neither player will return soon.

“What you’ll see early with us is probably not going to be who we are,” Aston said.

With Smart, his Longhorns can be viewed through a rather simplistic prism. Can this team shoot? Can the Horns make free throws?

Defense, rebounding, creating turnovers and being physical in the paint are things the UT men have sharpened in Smart’s three seasons. But scoring has been the bugaboo, which last anyone checked was the overarching objective.

“One of the things we’re looking for is who on this team can step forward and make outside shots. In the game,” Smart said. “It’s one thing to do it in practice. But in the game.”

The stat that’s been drilled into the players’ heads? UT coaches calculated the Horns went 8-9 last season in games decided in the last minute or overtime. Many, if not all of those, came down to free throws.

Smart said he’s looking for players “who step forward there and be really consistently excellent from the line.”

“Shaka talks about it all the time, how games come down to overtime or making free throws, that last effort or the rebound you didn’t think would cost you the game, etc.,” sophomore Jericho Sims said.

Fans won’t see a star freshman in the middle, like a Jarrett Allen or Mo Bamba, and the Longhorns are OK with that. It’s a team with solid fundamental pieces, led by guards Matt Coleman and Kerwin Roach II. Sims is a potential Big 12 star, and senior Dylan Osetkowski looks totally different nearly 30 pounds lighter and with a close-cropped haircut.

“There’s not that one-and-done guy here,” Coleman said in September. “That has been echoed many times through the gym already. It’s nothing to take offense. It’s nothing to hang your head about. Oh, we don’t have that certified pro, I guess. But we all know for us to get to our dreams, our next destination in life, we have to win.”

The Tip-Off event is the public debut of Smart’s freshman class, which features an interesting stew of different shapes, sizes and talents. “None of them are world-beaters,” Smart said. “The positive of that is that you’ll have them a little bit longer in our program.”

Jaxson Hayes, who’s 6-11, is another athletic freak in the mold of Sims. Those two together could be a fascinating pair in the frontcourt. It’s hoped 6-9 swingman Kamaka Hepa can stretch defenses with his outside shot. Freshman guard Courtney Ramey (6-3) was a late commitment last April. Everybody wanted the four-star athlete from St. Louis.

Is it possible that by trading one talented star, like Bamba, for multiple athletes that Texas is better overall?

“Yeah, it’s not just an optimistic point of view,” Sims said. “I think it’s actually a possibility for us to be stronger.”

Of all players on the roster, Andrew Jones’ strength should be unquestioned at this point.

The junior guard was diagnosed with leukemia last January. He’s spent most of the year going through treatment at UT MD Anderson Cancer Center in Houston. Jones enrolled in online classes in summer school, and “AJ1” returned to campus full time for the fall semester.

Jones had a minor setback last week when he suffered a fractured toe injury. Thus, he’s unlikely to scrimmage Wednesday.

“He doesn’t really let any obstacle take away from his enthusiasm to grow and get better,” Smart said.

Players on both teams are probably itching to play in front of fans. Practicing every day in an empty gym gets to be a drag at times. It’s an off week for the football team, so both coaches are hoping fans come see what things will look like this winter.

“Winning is infectious,” Aston said. “There is a vibe that you get from the football team winning. But more than anything, it’s a vibe the athletes get from each other.”