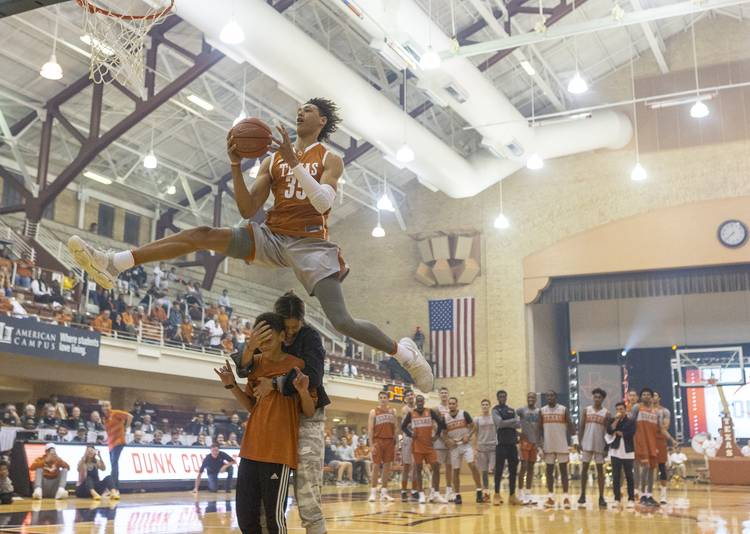 Texas forward Jaxson Hayes (10) dunks over his mother and little brother during the Texas Tip-Off preseason event for the men's and women's basketball teams at Gregory Gym, Wednesday, Oct. 17, 2018. [Stephen Spillman for Statesman]

Marketing officials tried the divide-and-conquer approach on Wednesday at the Texas Tip-Off.

The pros worried about the hundreds of Longhorns fans inside Gregory Gym. Guard Matt Coleman focused on a target audience of one — the 7-footer Will Baker from Westlake.

Carrying a white poster board with an unmistakable message, Coleman walked directly in front Baker sitting behind the bench. It read, “We Want Will.”

And in true Madison Avenue fashion, it included a hashtag — #BakeShow.

Baker, the star target of the 2019 recruiting class, and his parents just laughed. They probably appreciated the ingenuity, too.

“I just hope the message got through that he knows we want Will Baker,” Coleman said later, “and I’d love to play with a guy like Will Baker.”

The Baker family saw quite a show, including a standing ovation during player introductions for junior guard Andrew Jones.

Jones was diagnosed with leukemia last January. For several days, it was unclear whether he would live. Now, Jones is back in school and back on the roster for the upcoming season. He didn’t play Wednesday due to a fractured toe injury, but it’s clear his teammates love having Jones back.

“Just seeing Andrew, I feel like everybody’s spirits are high, the energy is high, everybody’s ready to go and get better and you can see it on the court,” senior guard Kerwin Roach II said.

Coach Karen Aston’s club was 11 for 23 from 3-point range during its 10-minute scrimmage. It was solid showing for a team that’ll start the year without injured forwards Joyner Holmes and Sedona Prince.

A lot of that outside shooting needs to come from Williams, a second-team All-SEC player last season and 1,000-point scorer for A&M’s Gary Blair.

After three years of sawing Varsity’s horns off, playing at Texas isn’t so bad, right?

“I feel like people at A&M, they just hate Texas so much,” said Williams, who hails from Clovis, N.M. “But Texas people, I haven’t heard people talk about A&M. I feel like they’ve kind of moved on, and A&M is still a little… mad, I guess you could say.”

Williams lost to Coleman in sudden death during the 3-point shooting finals. Former Texas guard A.J. Abrams, who was sitting in the stands, probably could’ve buried all of ’em.

“Just her understanding the level of play has been a positive, as she’s gotten more comfortable,” Aston said of Williams. “I’m just now starting to see probably the Danni we’ll all see as we move along.”

Roach won the dunk contest last year by flying over his mother and landing on “SportsCenter.” On Wednesday, Roach summoned UT journalism student Ariea Bastami from the stands to help with a bounce pass. It just never worked.

Roach’s father, Kerwin Sr., jumped up and threw his son a perfect pass for the jam. “Big shout out to my dad,” Roach said.

Not to be outdone, freshman Jaxson Hayes got one more chance to take flight. He threw down a one-handed, windmill dunk after leaping from just inside the free-throw line. This came after he donned a Kevin Durant jersey and dunked over his mother and little brother in the early rounds.

The 6-foot-11 Hayes paired with the 6-foot-9 Jericho Sims could make a fascinating pair in the frontcourt.

“He’s really good on lobs, running to the rim,” men’s coach Shaka Smart said. “He’s an energy guy, so if you can get him a big play early, or if he blocks a shot early like he did tonight, that elevates his energy that he’s giving off and it can be contagious.”

Smart let Sims pick the team’s for the men’s 12-minute scrimmage, “and he picked the two best guards,” the coach said.

Wise move by the sophomore. Sims will be playing alongside Coleman and Roach all season long. All three will have a serious impact on how good the Longhorns are or aren’t.

“Our freshmen got their little jitters out,” Coleman said. “It was sloppy at times, but we saw at times the potential that we have when things get going how good we can actually be.”

It’s not worth judging the statistics generated from this 12-minute scrimmage. Sims’ team did shoot 61.1 percent overall, and the Orange team went 4 for 7 from 3-point range.

All Smart really wanted was to come out healthy. Mission accomplished.

“The old-school coach in me would’ve loved to have played for longer,” Smart said, “but we’ll get back on the practice court and get back to work.”

At some point, the Horns would love it if Baker joined them.