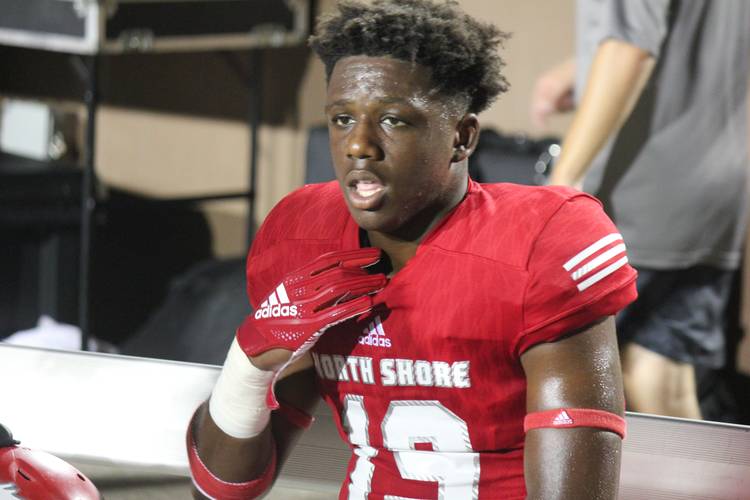 Three-star wide receiver Kennedy Lewis took an official visit to Texas and watched the improved Longhorns outlast Baylor. The momentum around the program is impacting recruits around the state. The 6-3 prospect was committed to TCU until Tuesday night.

“I will most likely open my recruitment back up,” Lewis said following his visit. “To make a (final) decision, I will pray and talk to my family.”

Texas already holds pledges from three receivers. The Longhorns could sign upwards of five at the position if the right pieces are available. Lewis is firmly a target following the official visit. He originally picked up an offer from Texas on June 11 and committed to TCU eight days later.

“Texas told me I am Plan A in recruiting at my position and they are definitely making me think about playing for them one day,” Lewis said. “I loved the visit. I enjoyed seeing the team and the coaches bond like a family, which I think is really important.”

One bond Lewis made on his visit was with Odessa Permian athlete and fellow target Peyton Powell. The four-star plays quarterback and said he’d like to continue at that position in college, but the Longhorns likely want him as a wide receiver or defensive back. The 6-2, 182-pounder holds 22 offers and likely moves into the Fabulous 55 when it’s updated on national signing day.

Texas could be that school. Powell also reported high marks on his visit to Austin.

“It was amazing,” he said. “I liked everything about it.”

Texas’ 2019 class sits at 18 commitments and ranks ninth in the nation. The Longhorns hope that number grows to 19 on Oct. 23 when four-star Marcus Washington picks a school. Expect Texas to sign at least 25 prospects in the class with an opportunity to sign more because of the eight early enrollees in the 2018 class.

2021 athlete Shadrach Banks in no hurry

Recruits can no longer afford to put off recruiting until their senior season. Offers and relationships begin to form as sophomores for the top talents in the nation. One of those players is Galena Park North Shore wide receiver Shadrach Banks. The 6-foot, 190-pound sophomore is a five-star athlete with 15 offers, including one from Texas.

It can be an overwhelming process for a kid who can’t even drive yet. Banks knows he has time to sort through his options and he’s surrounded by athletes facing a similar process.

“Recruiting is going well. I’m so young that I can take my time and worry about football and my grades,” he said. “The great part about North Shore is there are older guys getting recruited and I can lean on them for advice or information about a school.”

Banks is a key member of a North Shore team primed to make a state championship run in Class 6A led by five-star junior running back Zachary Evans and a defense filled with future FBS talents. Banks grew up a football player. He started in flag football and his success didn’t stop when pads were added in middle school. He’s a kid clearly living his dream.

“I’ve been working hard for this moment my whole life,” Banks said. “I started football when I was a 3-year-old on the north side of Houston. It feels good to have a bigger role. We have a good team here and we play hard. Practice is as hard as the games and that’s a key for us.”