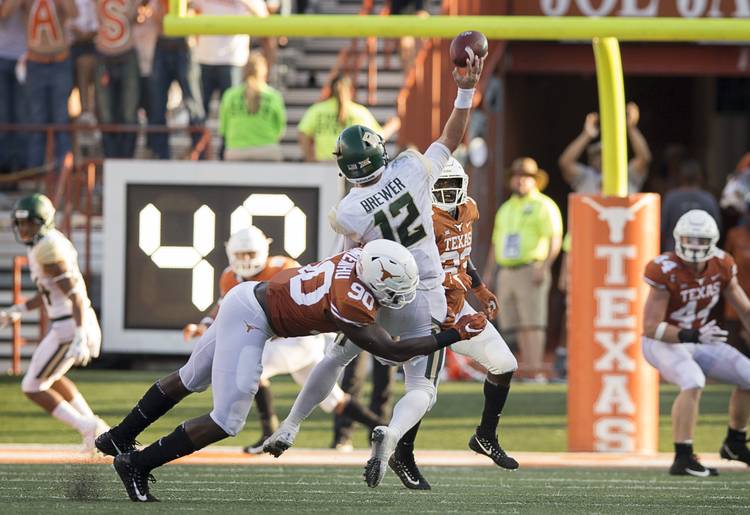 UT defensive end Charles Omenihu hits Baylor quarterback Charlie Brewer as he releases the ball on the last play of a game at Royal-Memorial Stadium on Oct. 13, 2018. [JAY JANNER/AMERICAN-STATESMAN]

This week’s notable number is 9 — the number worn by junior receiver Collin Johnson, who has caught a touchdown in each of his last four games. Texas has allowed nine passing touchdowns through seven games, though the Longhorns still must face two quarterbacks ranked No. 3 (West Virginia’s Will Grier) and 11th (Oklahoma State’s Taylor Corneliuis) nationally in that category. Historically, UT’s longest stretch as the No. 1-ranked team in the Associated Press poll was nine weeks, back in 1963.

The nine hurries were the most since the 2013 game against Texas Tech. Texas had three sacks against Baylor, which tied a season-high. Texas also had 10 tackles for loss, a stat bested this season by only the 10.5 stops it piled up in the win over USC.

“When you look at it, that’s real,” said Omenihu, who had two of those sacks against Baylor and harried Bears quarterback Charlie Brewer into an incompletion out of the end zone on the final play of the game.

Baylor coach Matt Rhule noted after the game that “the last two plays, we don’t block somebody.” That somebody was Omenihu, the 6-6, 275-pound senior who actually recorded a hurry on each of the final three plays. After Baylor, needing a touchdown to win, had reached Texas’ 17-yard line in the final minute, Brewer threw three straight incompletions.

Omenihu said this week that he was able to jump the snap on those final plays since the desperate Bears weren’t trying to draw defenders offsides.

“It’s just a mentality,” Omenihu said. “It’s also a craft that you have to continue to work on. Nobody is going to just let you just go get to the quarterback.”

Omenihu has sacks, second-best in the Big 12 behind Oklahoma State’s Jordan Brailford’s eight. As a team, Texas has 12 sacks and 20 hurries; the Longhorns had 16 sacks and 11 hurries after seven games last year.

Since Texas only plays three down linemen, what has been the key to rushing the quarterback? “Effort,” defensive tackle Chris Nelson analyzed. Defensive end Breckyn Hager has four hurries and a sack. Marqez Bimage, Gerald Wilbon and Ta’Quon Graham also have contributed in relief.

“When those (backups) come in, there’s no falloff,” Nelson said. “Hot games like it was Saturday, we needed them.”

After a slow start to the season, Texas (6-1, 4-0 Big 12) has been menacing quarterbacks. The Longhorns had only one sack after its first two games against Maryland and Tulsa. But then they sacked USC’s JT Daniels three times on Sept. 15. UT has recorded at least two sacks in three of its four Big 12 games.

“With this conference, everybody runs the spread offense pretty much and everybody’s throwing the ball a lot. I knew their time was coming,” UT safety Brandon Jones said. “They come up when we need them for sure. Big-time plays in big-time games.”

Texas, off this week, will travel to Oklahoma State on Oct. 27. With All-Big 12 preseason pick Marcus Keyes on its offensive line, the Cowboys have thrown 233 passes and are allowing 2.86 sacks per game. Those sack numbers rank 106th in the NCAA.