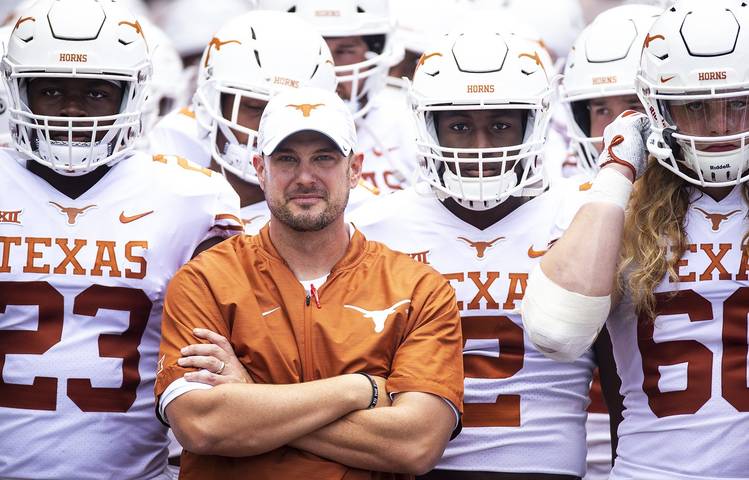 Texas head coach Tom Herman waits with his players to take the field before an NCAA college football game against Oklahoma at the Cotton Bowl in Dallas, Texas, on Saturday, Oct. 6, 2018. [NICK WAGNER/AMERICAN-STATESMAN]

Texas defensive tackle Chris Nelson figured it didn’t make much sense flying all the way back home to Florida during the off week.

“I mean, nothing changes.”

With no UT football this weekend, there’s plenty of time to sit and chill here in Austin. Things are finally changing around the football program. After eight seasons of mediocrity, the No. 7-ranked Longhorns (6-1, 4-0 Big 12) are back in first place in the league standings and once again in the top 10.

So dream big, Texas fans. Like, really big: Let’s examine what needs to happen for the Longhorns to win the Big 12, get into the College Football Playoff and shoot for the national title.

You cannot imagine how bad Breckyn Hager wants this to happen. The Texas senior is dying for that haircut, something he’s promised to do on the championship stage if UT wins the Big 12.

As one can imagine, UT coach Tom Herman wants no part of this topic. It’s completely off brand. His 1-0 mantra is something his players now believe in.

Asked last Monday if his team can compete for the national title, Herman said, “I have no idea. I really don’t. I don’t know what else is out there. I know what we’ve played thus far in the Big 12 and we won those games. We’re going to focus on going 1-0 in the bye week and then 1-0 against Oklahoma State.”

Herman said Texas’ best is good enough to beat anybody. However, the Longhorns are not at a point “where we can play a C game and beat anybody left on our schedule, either.”

You won’t find anyone talking openly about this subject in the locker room, either. At least, you shouldn’t. The first CFP rankings don’t even come out until Oct. 30. They’re updated weekly on Tuesdays. CFP selection day is Dec. 2.

“I mean, I haven’t even heard no conversation, so this is news to me,” defensive end Charles Omenihu said. “Not really worried about it, man. You take it one game at a time, and you take this bye week next. So that’s what I’m focused on right now.

“Focused on getting better and letting other people talk about that, you feel me?”

This will require a series of steps, all taken in logical order, none coming before the one that precedes it. This whole thing could fly off the rails with a loss in Stillwater or Lubbock on Nov. 10. And since Texas already has one loss, the Horns need some help from others to get into the playoffs.

Want to see the Longhorns go all the way? Follow these steps:

Win the next five games: This is non-negotiable. That means taking care of business against Oklahoma State, West Virginia, Texas Tech, Iowa State and Kansas.

By no means is there a belief Texas will roll through those five foes. Far from it. What fans saw against Baylor is what they should expect the rest of the way. Expect nail-biters galore, especially on the road in Stillwater and Lubbock.

Don’t look now but the Nov. 17 home game against the Cyclones may be a barn-burner.

Texas is a team that does a lot of good things, just not necessarily great. The Longhorns paper over their mistakes with sheer toughness and hustle. That’s half the battle.

A 5-0 finish is a must. Texas could actually lose one, maybe two, and still make the Big 12 title game. But as far as the CFP is concerned, the Horns need to run the table.

Cheer for Maryland: At the time, the season-opening 34-29 loss was a jaw-dropper. How in the world could Texas have lost to Maryland? Again!?

The Terrapins carried that momentum forward and now boast a 4-2 record going into this weekend’s Big Ten battle at Iowa. Texas needs Maryland to keep winning, so that loss won’t look so bad when the committee examines each team’s résumé. The schedule isn’t favorable, though. Maryland still must play Michigan State, Ohio State and Penn State.

Root against Oklahoma: You can bet quarterback Kyler Murray is more motivated than ever to make up for that loss to Texas. The Sooners could easily run the table and get a rematch with the Longhorns at AT&T Stadium in December.

If Texas and OU both have 11-1 records if/when they meet again, it’ll be a winner-take-all scenario. The winner gets the Big 12 title and has the best chance to make the CFP, if a Big 12 team makes it this year at all.

Texas needs someone else to beat OU down the stretch. If OU’s only loss is to a team ranked seventh in the country (Texas), then CFP officials may keep the Sooners in the mix via the weekly rankings. It’s all about perception.

Watch the scoreboard: You know No. 1 Alabama is probably going to keep winning. Ohio State, Clemson and Notre Dame are all still undefeated. If all four teams win out, it’s done. That’s your four-team playoff.

Notre Dame could block out the Big 12 and Pac-12 with its shiny gold helmets if the Irish keep winning.

It’s unlikely all four teams will go undefeated, though. This is college football, where anything is possible. Only three teams have gone undefeated in the regular season since the start of the CFP in 2014.

Texas has already accomplished one of the most difficult aspects of this entire ordeal. The Horns have climbed high enough in The Associated Press Top 25 to merit strong consideration. Just know the AP poll is separate from the CFP rankings. The AP poll is merely a tool for the selection committee, not the Bible.

So cheer for the upsets. Texas needs some in other conferences.

Now, the bowl system is mostly a tiered arrangement dictated by the conferences.

The Athletic currently projects Texas to play Georgia in the Sugar Bowl. Hey, a New Year’s Six bowl game against a SEC power? Texas fans might take that right now and be happy. But that’s where things are headed.

In the end, the Longhorns should focus on winning six more games — five regular-season matchups and the Big 12 title. A one-loss Texas team will look awfully enticing to the CFP selection committee should other stumble.

Back at Gregory Gym, No. 8 Texas returns to dominating ways in Big 12 play