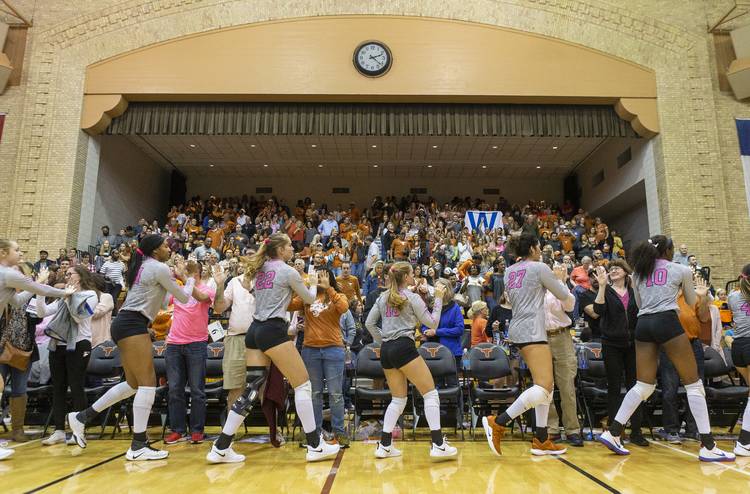 The jerseys looked different for Texas on Saturday afternoon. The result didn’t.

Junior Micaya White’s seventh double-double of the season and a career-best effort from senior Yaazie Bedart-Ghani guided Texas to a 25-13, 25-18, 25-21 sweep of Texas Tech. Wearing gray jerseys with pink lettering for their “Volley for a Cure” match at Gregory Gym, the Longhorns improved to 7-1 against Big 12 opponents.

“We’re so used to playing in Gregory, so it’s nice because whatever swings you take, you just have this feeling of comfort. You know the court; you know the atmosphere,” Bedart-Ghani said. “It’s kind of, like, fly by the seat of your pants when we’re on the road, so it’s nice to be back.”

Texas, which is ranked eighth in the AVCA’s national poll, scored nine of Saturday’s first 11 points. White and Bedart-Ghani were perfect in the opening set as both registered five kills on five swings. Additionally, White was responsible for one of UT’s two aces.

Texas Tech held an early lead in the second set, but both White and Bedart-Ghani brought a six-kill meal to UT’s points potluck. In the final frame, Texas secured its sweep after surviving three successful challenges by Texas Tech.

Texas was hitting .283 as a team, and three of UT’s five attackers beat that mark Saturday. White looked the part of a two-time All-American with her 17-kill, 12-dig performance against the Red Raiders. Bedart-Ghani, meanwhile, hit .520 with a career-high 16 kills in the best performance of a season in which she has missed five matches because of a back injury and an illness.

“This is the first time our offense has clicked in quite some time,” said Elliott, who said the team’s defensive touches led to a season-best .438 hitting percentage. “We’re such a young team, we’ve been chasing so many different skill sets. … I think we took a little bit too much time off away from offense. We spent some more time on it this week.”

Defensively, Texas allowed one ace while siding out at a rate of 79.7 percent. Led at the net by senior Morgan Johnson’s seven blocks, UT out-blocked Texas Tech 9-4.

“I think we get a lot of great help from our coaches,” Johnson said. “They have a scouting report ready for us, and then we have different blocking schemes tailored to each team that makes playing defense so much easier for us.”

Texas Tech (15-7, 4-4 Big 12) was led by 12 kills from Katy Keenan. Redshirt freshman Andrea Janss, who graduated from nearby McCallum High, had two kills on four attempts.

Saturday’s appearance was UT’s first since it survived a five-set match at Oklahoma last week. Elliott said the team held shortened practices Monday and Friday and the players were given Tuesday off. Texas will return to the road Wednesday when it travels to Iowa State.

Dream big, Texas: Here’s how the No. 7 Longhorns could make the College Football Playoff