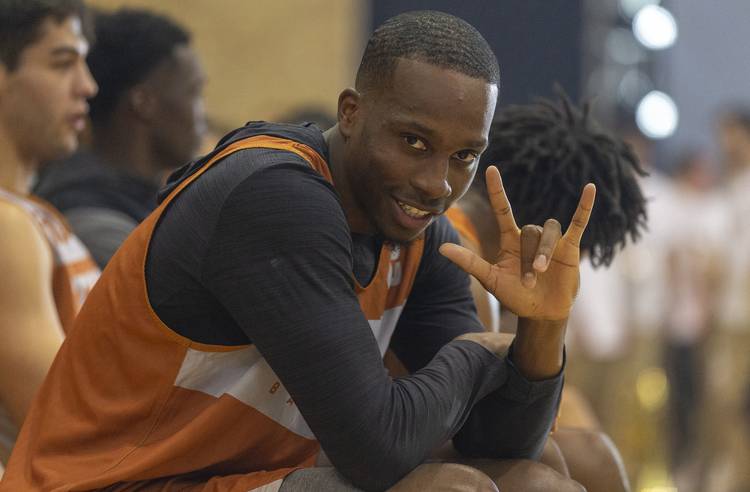 The last two seasons, Texas’ offensive weapon of choice was obvious. All the guards had to do was throw it to the big man inside — Jarrett Allen or Mo Bamba. They just swatted it away on the other end.

So who’s the go-to leader this season? There should be an obvious guy who makes you think, “Oh, this is his team.” It’s not that clear, frankly.

“We’ve talked about that a lot,” UT coach Shaka Smart said. The coach, entering his fourth season with a 50-50 record at Texas, then rattled off a list of qualified candidates.

Kerwin Roach II is starting his senior season just 41 points shy of 1,000 for his career. Senior Dylan Osetkowski heads into his senior season looking like a changed man, one who’s 30 pounds lighter. Elijah Mitrou-Long, a junior transfer, will provide experience and depth.

“We’re going to need to do it by committee,” Smart said.

The answer should be Matt Coleman III. Period. Full stop.

No football team can win without a quarterback, and basketball is much the same. The point guard controls the tempo, manages the game, elevates others and communicates the coach’s message on the floor.

That’s exactly what Smart saw in Coleman way back in middle school when he thought Coleman would attend Virginia Commonwealth. Smart’s school changed; the recruitment didn’t. That’s what he expects the 6-foot-2 guard to do this season for Texas.

To do it all well, sometimes that means telling people things they don’t want to hear. You can’t shy away from conflict. Even Rajon Rondo was walking around the floor telling LeBron James what to do in the Los Angeles Lakers’ season opener Thursday night.

It better be Coleman, who started all 34 games last season, led UT in assists (4.1 per game) and had a season-high 25 points against Nevada in the NCAA Tournament.

“They always tell me to say it with more salt than sugar,” Coleman said. “I feel respected by everybody, but I always wanted to be liked by everybody.

“When they say Matt, (people say) he’s a cool dude,” he added. “But now I know we’ve been through some things this spring, this summer, this fall. The guys respect me, but they want that from me. They want to get the best out of themselves. So say no more.”

Every freshman is different and must be treated as such. Smart used kid gloves with Allen two years ago; he was often more interested in video games than basketball. Smart was harder on Bamba last season; he made it clear this was a one-and-done arrangement.

Smart has never been afraid to criticize Coleman after games. That’s included everything from light teasing to a straight-up rip job.

Just last week, Smart said, “Matt’s still too nice. He’s made a lot of progress with that. But he needs to understand what his teammates need to hear from him is not necessarily always all sugary and nice. It might need to be the opposite of that in certain moments. He’s gotten a lot better, but he still has to overcome his desire to be liked by everyone all the time.”

Said Coleman: “It’s motivation. Starts from day one when he recruited me. He put all his faith, all his trust in me. So I just want to do what I can. The faith he had in me, it’s real.”

Coleman wants to be a coach himself someday. He’s already got the recruiting part down pat. Coleman held up a poster board Wednesday at the Texas Tip-Off that read, “We Want Will,” as he walked directly in front of Will Baker and his family. The Westlake High 7-footer is the main target in the 2019 recruiting class.

Coleman’s got a lot of work ahead on the floor, though. The Longhorns have finished at or near the bottom in Big 12 scoring the past two seasons. Smart hopes to change that by pushing the pace and getting the first shot up within 7 seconds on the play clock.

Coleman said from July 17 to Aug. 17, all the guards were required to hit 10,000 3-point shots. Long finished first, Coleman second, Jase Febres third. “And the freshmen were last, of course,” Coleman said.

Coleman doesn’t have much room to brag. He made only 28 of 98 3-point shots last season. That’s just 28.6 percent. Oklahoma’s Trae Young made 118 shots from beyond the arc. He’s now bombing away in the NBA. West Virginia’s Jevon Carter was known for his suffocating defense, but even he managed to hit 77 3s.

“If you look at our conference, the teams that end up at or near the top have really, really good guards, and those guards control the game,” Smart said.

Smart now admits how bad the guard situation was two years ago when the coaching staff was woefully unprepared for Isaiah Taylor’s abrupt jump into the NBA draft.

“Two years ago, our guards were poor,” Smart said, his eyes widening in a yeah-that-was-awful sort of way.

The Horns essentially muddled through the 2016-17 season and waited for Coleman’s arrival.

Coleman now has a full season of college basketball on his ledger. His assist-to-turnover ratio (1.9) was seventh in the league, two slots ahead of Young.

His time is now. Right now. Coleman came to Texas wanting to lead the Longhorns, just as floor generals T.J. Ford and D.J. Augustin did. He might not have A.J. Abrams’ outside shot, but he’s got Abrams’ desire. Even Taylor and Javan Felix weren’t afraid to speak up.

“I feel a lot more confident, a lot more mature, after having a year like I had under my belt,” Coleman said. “With the ups and downs we had and the roller-coaster type season, I feel like stepping in and letting myself, letting my emotions, letting my personality affect everyone around me.

“It’s being that true leader I know we can be, and I know I can be.”

Back at Gregory Gym, No. 8 Texas returns to dominating ways in Big 12 play