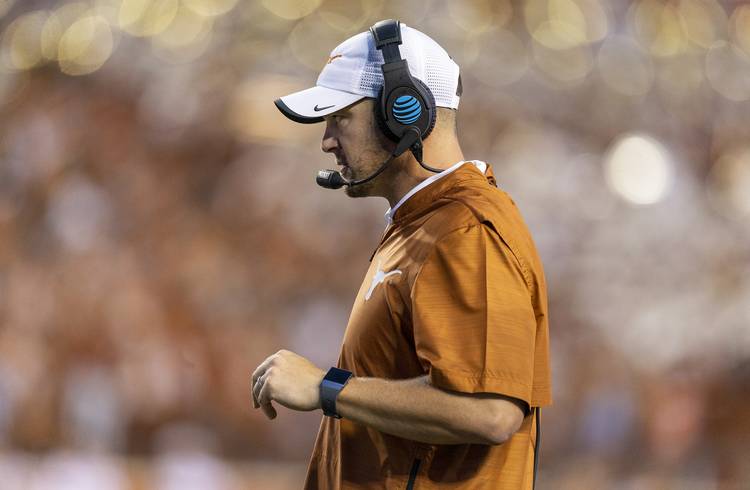 Texas head coach Tom Herman watches his team compete against USC in the first half of an NCAA football game at Royal-Memorial Stadium, Saturday, Sept. 15, 2018. (Stephen Spillman / for American-Statesman)

With the early signing period two months away, the 2019 recruiting class is suddenly in crunch time. The bulk of commits and the top targets on the board hope to decide before December and plan to sign in December rather than waiting until national signing day in February. That was the case with the 2018 class as well.

Texas’ class currently consists of 18 prospects and ranks ninth in the nation. The Longhorns want to sign at least 25 players. Tom Herman can sign above the limit if scholarships are available because eight players in the 2018 class enrolled early and were counted toward the smaller 2017 class.

The targets are clear except along the offensive line. The Texas staff expects to identify targets with more 2018 game tape and new offers should pop up soon. Five-stars Trey Sanders and Bru McCoy are prospects Texas will fight for until the fax machines fire up.

Here are five targets that Texas feels good about as October ends:

Washington will announce his college destination on Friday. Texas is the expected leader and the out-of-state star would become the fourth wide receiver pledged to the Longhorns. Washington would be the tallest of the bunch and would give assistant coach Drew Mehringer a true outside threat in this class. Washington took an official visit to Austin on Sept. 15 and left with Texas in the lead.

The one-time Iowa State commit is now pegged as a Texas lean following a recent official visit. He’d be the fourth linebacker to pledge to Texas and the first JUCO prospect. The three-star flies around the field and can play multiple spots. His age and physical development also give him an advantage on his recruiting class peers. Texas will hope that maturity means Johnson can at least provide depth on the two-deep in 2019, if not push for a starting spot with Gary Johnson and Anthony Wheeler set to depart. He’s expected to visit Arkansas this weekend.

The Longhorns emerged as the clear leader for Lewis when he de-committed from TCU days after taking an official visit to Texas on Oct. 12. Lewis is a big, long wide receiver who would offer a completely different build and skill set than the three receivers already committed to the Longhorns. He earned first-team all-district honors as a junior after recording 48 receptions for 1,099 yards and 11 touchdowns. Five of his 11 catches as a sophomore resulted in scores.

Powell took an official visit to Austin the same weekend as Lewis and the two bonded. They left with Texas as their leaders. Powell plays quarterback for Permian and would like a shot at the position to start his college career. It’s more likely that he transitions to defensive back or wide receiver no matter which school he picks.

Warren is another former TCU commit that the Longhorns are chasing. He possesses the frame that the UT defensive coaches love: Big, stocky and athletic. Warren, much like current UT defensive line commit T’Vondre Sweat, slips in recruiting rankings because he doesn’t possess the ideal height for defensive end or the sheer size for tackle. The odd-man front deployed by defensive coordinator Todd Orlando loves those players. Warren will visit Oregon this weekend. LSU always seems to be the favorite with Louisiana prospects. The good news for Texas is that LSU might not have room for Warren if the Tigers land other in-state targets.

‘If he’s healthy and he’s himself,’ Texas’ Sam Ehlinger will start vs. Oklahoma State