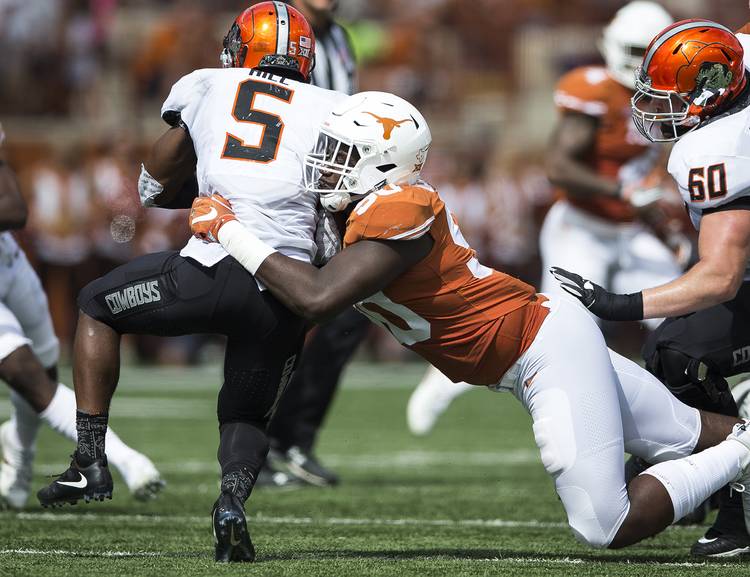 Expect the Cowboys to be in a celebratory mood when Texas travels to Oklahoma State this weekend.

First off, it’s Oklahoma State’s homecoming. It’s also going to be the first sellout at Boone Pickens Stadium this season (the Cowboys have already played five home games). And players will wear patches and throwback jerseys to honor OSU legend Barry Sanders, who will be there on Saturday.

Texas never faced the 1988 Heisman Trophy winner since the Longhorns were in the Southwest Conference back then and Oklahoma State was in the Big Eight. But the Longhorns do have plenty of familiarity with Justice Hill, the current star of the Oklahoma State backfield.

“This guy’s a stud,” UT coach Tom Herman said on Monday. “He’s as good as there is in our conference. He was last year and continues to be this year. He was preseason first time all-conference for a reason.”

“(He’s) very elusive. I’d say similar to the way Barry Sanders is,” said UT safety Caden Sterns, whose older brother is an ex-teammate of Hill’s. “He can make people miss.”

Added defensive end Charles Omenihu: “Justice Hill can make anybody miss. The dude wants to make a big play every play and he’s a good running back.”

Texas, allowing 126.4 yards per game, boasts the country’s 31st-rated run defense. In last month’s win over USC, the Longhorns held the Trojans to minus-5 yards.

No UT opponent has gained more rushing yards than Kyler Murray, the Oklahoma quarterback who earned 67 of his 92 yards on one run at the Cotton Bowl. Running backs are averaging 3.6 yards per carry against the Longhorns. Barnes’ 80-yard day on Sept. 29 is the best effort by an opposing back.

Last week, Omenihu said the defense took a lot of pride in its ability to stop the run. Omenihu leads Texas with six sacks, but he said that playing the run is a bigger priority. If a defense can’t find success on the ground, “they are going to keep running it down your throat.”

“It’s a thing where the guy’s testing your manhood and you’re testing his,” Omenihu added. “Who’s going to flinch first? It’s physical down there and that’s how we like it.”

In last year’s game, Oklahoma State failed to score 30 points for the only time in 2017. Texas dared the Cowboys to run, and their 146 yards were compiled on 51 carries. Oklahoma State had Pittsburgh Steelers rookie Mason Rudolph as its quarterback last year, but UT was one of only two teams to hold the Cowboys under 300 passing yards.

“It gave us a lot of confidence, just knowing what the defense can do,” senior defensive tackle Chris Nelson said. “Each and every one of us on the team last year, we didn’t fully understand the defense, we were just out there playing. We knew it worked but we were just out there playing. Now that the guys know what to do and how does it work, I feel like we’re a lot better.”

The Dotted Line: What we know, what we don’t know about Texas’ 2019 recruiting class