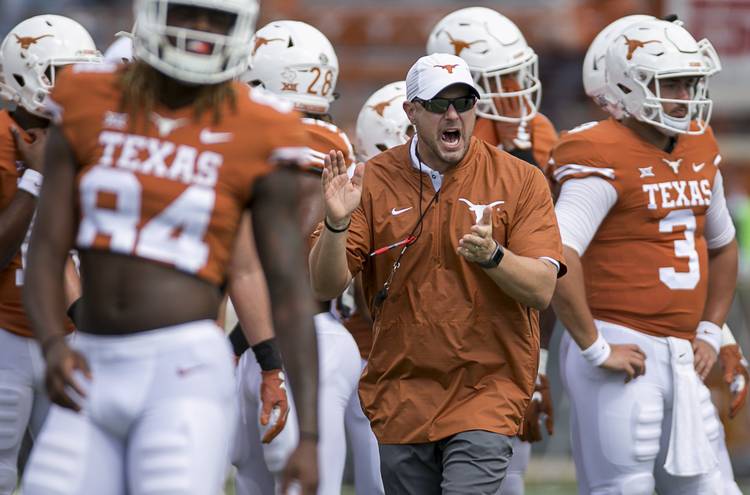 Tom Herman gained a pledge from his 19th prospect in the 2019 class on Tuesday when four-star Odessa Permian athlete Peyton Powell picked the Longhorns over Ohio State, Oklahoma and TCU. His commitment bumped Texas’ recruiting class to No. 7 in the nation and that should creep toward the top 5 on Friday if Texas lands four-star wide receiver Marcus Washington.

Two months remain until the early signing period and most of the 2019 prospects plan to utilize the three-day window instead of waiting until February’s national signing day. It’s forced college coaches to work overtime in October and November. A head coach can no longer wait until after the bowl season to wrap up the class. In 2018, for example, 19 of the 21 commits going into December signed with Texas. Expect that trend to continue.

Herman and his staff are assembling another top-tier class a year removed from signing the third-best class in the nation. The 2019 class is starting to take real shape. There are many things we know about the cycle, and a few things we still need to figure out about this class before the fax machines are plugged in before Christmas.

Texas will sign another top 10 class. The Longhorns already rank seventh and there is still room to sign at least six more prospects. Some of those are five-star talents like athlete Bru McCoy and running back Trey Sanders. Others like Washington, JUCO outside linebacker Caleb Johnson and former TCU commit Kennedy Lewis are leaning toward the Longhorns and likely will become three more pledges before December.

That puts the class at 22 before accounting for any JUCO offensive linemen or defensive linemen that Texas hopes to add. Texas can sign over the 25-man limit because of the eight early enrollees in the 2018 class counting back toward a smallish 2017 cycle. Iowa Central C.C. offensive tackle Myron Cunningham picked up an offer this week. Louisiana native Myron Warren is the top target left on the defensive line.

Texas is set at quarterback with Roschon Johnson and the possibility of Powell staying at quarterback instead of transitioning to wide receiver or defensive back. The Longhorns would also be done at linebacker if Johnson pulls the trigger.

We also know Texas built back its momentum from the 2018 class by beating programs like TCU, USC and Oklahoma. Each one of those wins left significant impacts on recruits. The Longhorns are one of the best programs in the nation when it comes to hosting official visits, and this staff is using the allure of Austin to its advantage.

What we don’t know

It’s unclear if Texas will go over the 25-man limit or save those extra scholarships for 2020. Texas pulled a similar trick in 2017 when Herman first took the job. He and recruiting coordinator Derek Chang decided it’d be best to sign fewer prospects in 2017 to sign better prospects in 2018. If Texas can’t identify the right two or three pieces to finish off the class after the early signing period, the Longhorns could lay low and sprinkle those offers around the 2020 cycle.

Texas feels good about its chances with the top remaining targets at skill positions and linebacker. It’s offensive and defensive line that remain question marks. Warren is a three-star defensive end who is favored to pick Texas unless LSU becomes more active in his recruitment. Cunningham is the first of a few JUCO offensive linemen Texas expects to offer. Can Texas flip any Fabulous 55 members? Is it possible to close with McCoy and Sanders? Are there the right targets left in the JUCO ranks to fill the needs along the line of scrimmage on both sides of the ball?

Those are questions Herman and his staff must answer before turning the page to 2020.

‘Who’s going to flinch first?’ Texas to be tested on the ground by Oklahoma State’s Justice Hill