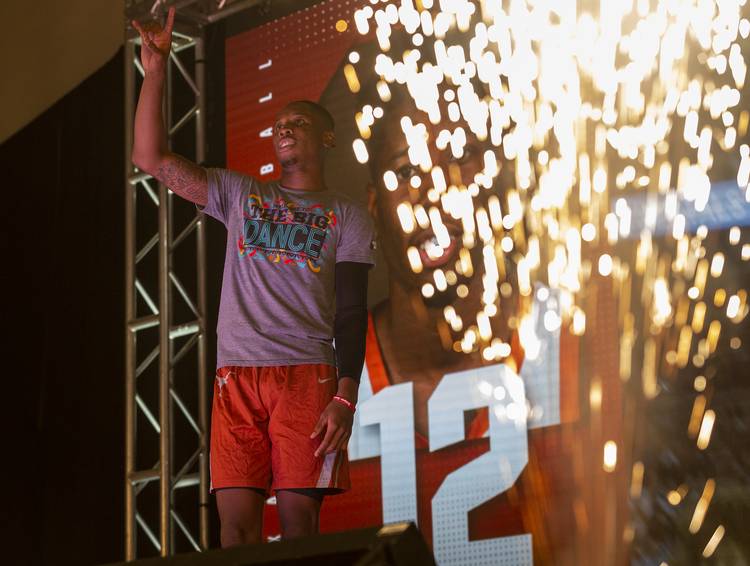 When Roach was at Sprint Center last March, he took a vicious elbow from Iowa State guard Lindell Wigginton. The accidental blow sliced one of Roach’s central incisors in half. He just spit it out and logged 37 minutes in the Longhorns’ 68-64 win at the Big 12 tournament.

No whistle on that foul, either.

Roach has been wearing a retainer-like insert that has a singular tooth attached to it. After an interview Wednesday at Big 12 media day, he slipped it out, winked and then took a monster bite from a sandwich. Straws have been fitting just fine.

Roach said Wigginton apologized when the two were together at Chris Paul’s camp this summer.

“I didn’t mean to do it, but I mean, it’s basketball,” Wigginton said. “It’s going to be a contact sport. But yeah, I apologized to him. I just have real respect for him and his teammates. He’s a cool guy.”

Roach, known to teammates as “Snoop,” is having implant surgery on Thursday.

“It’s actually a good memory,” Roach said. “It’s a landmark in my life. One of my worst fears actually came to life. I had braces for two-and-a-half years, and I always thought a chipped tooth was one of the ugliest things that could happen to a person. And it happened to me.”

Paging Dr. Carr: While the entire UT fandom was focused on the Texas-Oklahoma football game in Dallas on Oct. 6, coach Shaka Smart had something special planned for the men’s basketball team.

Carr also spent time helping the players build their own confidence. His advice? Essentially, when you miss a shot, bleep it.

AJ1 update: Smart said guard Andrew Jones (fractured toe) could be cleared to get back on the practice floor this week. If not this week, he said, “hopefully very soon.”

Jones was diagnosed with leukemia last January. It’s been a serious uphill battle just to get healthy enough to get back in school and back on the team. The fractured toe injury was an unforeseen setback on his path back to full-time basketball.

“He’s gained a lot of strength back and gained some of his explosiveness back,” Smart said. “He’ll be the first to tell you he’s not all the way where he was physically as a player yet, but the guy’s work ethic is phenomenal.”

Smart said he probably won’t know who will play the small forward position until probably several games into the season. Osetkowski suggested that he could move to the small forward spot to clear room for freshman Jaxson Hayes, who has dazzled insiders with his athleticism in practice thus far.

“I’m just happy to be on the court,” Osetkowski said.

Scrimmage time: Texas has two upcoming closed scrimmages that are supposedly hush-hush. The NCAA once frowned on publicizing these private events, but those rules have been relaxed over the years.

Texas will play LSU in Houston on Saturday, then host Texas A&M inside Cooley Pavilion on Nov. 1. Typically, the final statistics are closely-held state secrets, but coaches will generally say who performed well afterward.

Texas opens the season on Nov. 6 at home against Eastern Illinois.

It will be similar to the Big 12/SEC Challenge played in January, which Bowlsby said will continue. Texas will face Providence next season in its first Big 12/Big East matchup.

Also, there are no plans to bring the Big 12 men’s basketball tournament back to Texas any time soon. The league said the annual event will remain in Kansas City through 2024.