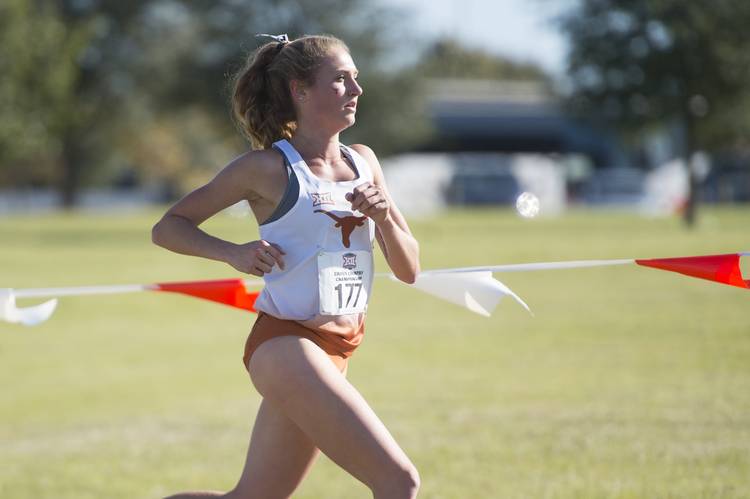 Meghan Lloyd is a senior on the women's cross-country team at Texas. Lloyd was diagnosed with thyroid cancer earlier this year. (Photo courtesy of Texas athletics)

Earlier this month, the NCAA asked athletes to take to Twitter to reveal their off-field attributes and achievements.

Texas football player Chris Nelson, for example, used the #NCAAInclusion hashtag to discuss being the first member of his family to graduate from college. UT golfer Kaitlyn Papp wrote about her military upbringing and love of dogs. The volleyball team shared a video of freshman Jhenna Gabriel singing and strumming her ukulele.

Meghan Lloyd, a senior cross-country runner, also described herself in less than 280 characters. In her own words, she’s a leader, friend and believer. She’s a daughter — Ray and Lina Lloyd’s oldest — and a sister, to Kimberly. She’ll one day be a speech and language pathologist.

And having battled thyroid cancer earlier this year, Lloyd, 21, is also a survivor.

“I’m grateful,” said Lloyd, who’ll compete for Texas in the Big 12 championships in Ames, Iowa on Friday. “The doctors always say, ‘cancer’s cancer and it sucks.’ Now I think it’s just something that just represents how strong a person can be and any trials you’ve had to face.”

Seven months ago, Lloyd went for a routine check-up with her doctor at Texas. Something amiss was detected, and since her grandmother had thyroid cancer, a month of follow-up appointments were needed. She eventually received a phone call asking her parents to come to town — a call she took as she was getting ready to depart for a track meet in California, where she’d set a personal record in the 5,000 meters, no less. She sensed the diagnosis was coming.

Lloyd was diagnosed with papillary thyroid cancer, a slow-moving disease that spreads in the neck area. She was allowed to put off surgery until the end of the track and field season. After an initial hope that half her thyroid could be saved, doctors removed the entire gland when it was discovered her cancer had spread.

Lloyd has been told the chance of a recurrence of her cancer is 10 percent.

Lloyd, who grew up in Keller outside Fort Worth, chose to recover in Austin since her doctors were here. Her mother stayed with her for a while. Her teammates and fellow runners stepped up, too. Alex Cruz took notes for Lloyd at her doctor appointments. Jordan Welborn and Gabby Crank provided comfort at the home they all share. John Rice, who’s also her boyfriend, became Lloyd’s personal chauffeur.

“The Longhorn family really stepped up. It’s part of their culture,” Ray Lloyd said. “I don’t expect anything from anybody, but to know it was going to happen and for it to be possible, it’s truly a statement to the program. They’re all rock stars.”

Lloyd’s surgery was in June, so she did some of her summertime training for cross-country beforehand. She was unable to run for two weeks after the surgery. Then, even running a mile made her feel tired and out-of-shape. Figuring out how much of a prescribed hormone supplement an athlete needs every day also has been a long game of trial and error.

As expected, Lloyd has had good days and bad days. She has wondered on those bad days if there was a point in still running, an activity she picked up after getting cut from the Keller soccer team as a freshman.

“I did have my pity party and be like ‘Why me?'” she said. “Then you think, ‘I’m so lucky.’ It could have been so much worse. Just to even be a student-athlete here at UT and the experiences that I’ve had, I’m so grateful. So, that pity party ended and now I’m moving forward.”

If we’re putting percentages on Lloyd’s recovery, she feels she’s at 80 percent now. She can only run 40-some miles in a week due to the late start in her training, where past years may have featured 70-mile weeks. Occasionally, she must work out and run with UT’s second group. Lloyd, Texas’ record-holder in the 3,000-meter outdoor steeplechase, is hopeful she can use the cross-country season as a springboard to her final year on the track.

She’s been contributing in cross-country; the Longhorns are looking to improve on last year’s third-place finish at the Big 12 meet and Lloyd has been among UT’s five top runners in the last two meets. At the Texas A&M Invitational on Oct 13, she ran six kilometers in 22 minutes, 13.1 seconds.

“She didn’t make a big deal about it, but this is a school record-holder that missed almost the entire summer of training,” Texas coach PattiSue Plumer said. “She came back and jumped right in like she hadn’t missed a step. She won’t ever make a big deal of it, and a lot of people don’t even know what happened, but for her to be here and running this season is a big deal.”

The Dotted Line: The Week 9 guide to watch Texas commits