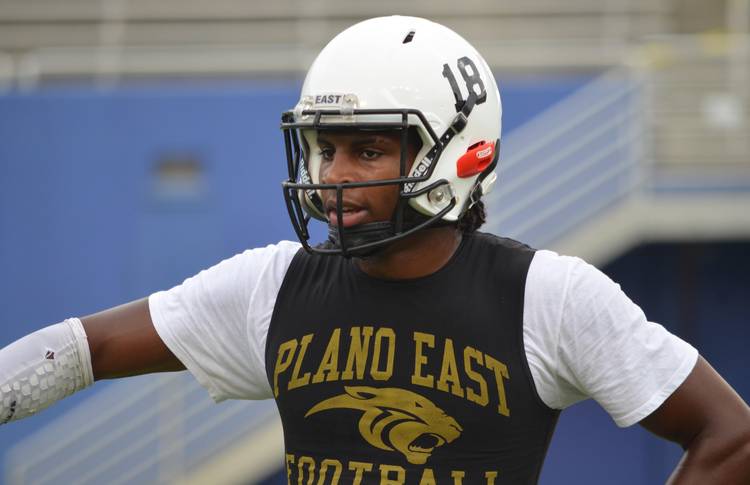 Only cornerback commit Marques Caldwell won’t be in action this weekend as the three-star and member of the 2019 Fabulous 55 continues to recover from a torn labrum. The other 10 in-state commits are fighting for playoff spots with three regular season games remaining for teams across the Lone Star State. The commits in Arizona and California are nearing the end of the regular season with playoffs beginning in two weeks. Here is the schedule for each of the commits this week.

Texas’ latest commitment starts at quarterback for Permian. The Panthers are 2-0 in district play.

Plano East faces a must-win game against McKinney after dropping its last two district contests. No defensive stats are available.

Playing quarterback, Wiley had 790 yards and 13 touchdowns passing without an interception in non-district play. He also scored on a 42-yard rushing touchdown and has 353 yards on the ground through four games. Temple is undefeated with three games remaining.

Texas’ newest linebacker commit has recorded 56 tackles, including 10 for loss, in his first seven games. Cinco Ranch is 2-5, but 2-1 in district play.

Johnson suffered through multiple injuries to start his senior year, but is fully healthy and his team is undefeated in district play. The four-star quarterback became his high school’s all-time leading passer in the win over Dayton last week.

George Ranch is 3-4 this season. No defensive stats were available.

North Forest is 1-6 on the season and Shepherd is back following a suspension.

Sweat recorded four sacks in the win over A&M Consolidated two weeks ago. He’s also intercepted a pass this season. No full stats are available. Huntsville is 6-1 and undefeated in district.

Whittington recorded 12 catches for 183 yards and two touchdowns in his first game back from a nagging groin injury that required surgery in the summer. He returned an interception for a touchdown in his second game back.

Mayfair and Adimora, a four-star safety commit, started the season 7-2 and are set for a showdown with Gahr in a neutral-site game. Adimora stars on both sides of the ball for Mayfair, patrolling the secondary at safety and contributing at wide receiver. He recorded nine catches for 312 yards and three touchdowns in the loss three weeks back.

Jake Smith is enjoying the best season of any Texas commit. The future slot receiver plays all over the field for his 9-0 Notre Dame Prep squad. He scored 11 of the team’s first 12 touchdowns. He has 660 yards and 14 touchdowns on the ground and 37 receptions for 836 yards and 17 touchdowns on the season.

Watson and his Grayson teammates are 6-2 entering the away game on Thursday. Watson has 26 tackles, an interception and two forced fumbles in eight games.

Chandler is on a eight-game winning streak after opening with a loss to Centennial (Calif.) in a neutral-site game. Liebrock has 37 catches for 470 yards and five touchdowns in nine games.

Jones is 7-1. Defensive stats were not available for Tillman.

Millwood is the defending Class 2A Oklahoma state champions and is 8-0. No stats were available.

Buford is 6-2. No stats available.

Card and his Cavaliers are 6-1. He’s completed 68 percent of his passes for 888 yards and 13 touchdowns, adding a team-high 311 yards and five touchdowns on the ground through his first seven games.