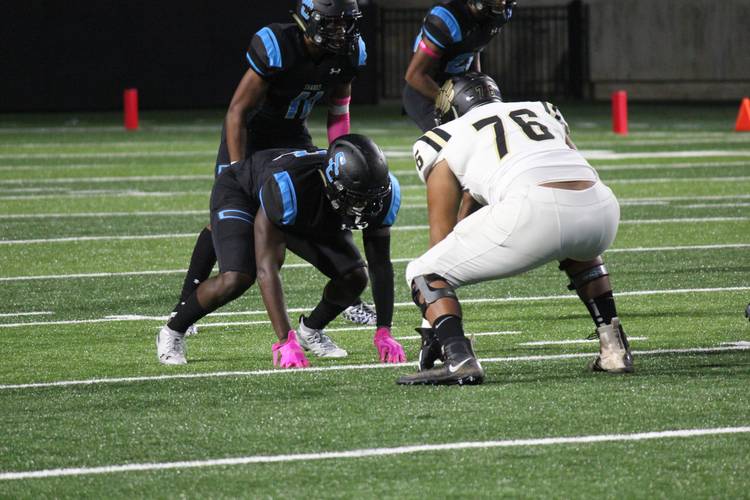 ALVIN — The top-rated Texan in the 2019 class is Lake Travis wide receiver Garrett Wilson. The No. 1 prospect in the 2020 class is Houston North Shore running back Zachary Evans. The leader for best player in the 2021 class is five-star Richmond Foster offensive tackle Reuben Fatheree II. He and his teammates fell in a heartbreaking loss to Alvin Shadow Creek on Friday.

The 6-8, 300-pound sophomore is one of four offensive tackles from the Houston-area that have already been offered by Texas for that cycle, and he’s the No. 25-ranked prospect in the entire class. He already holds 14 offers.

Fatheree already keeps an ear toward recruiting. He can’t even drive yet, though, so the massive young man understands that improving on the field and staying diligent in the classroom are more important than naming leaders and narrowing lists with two prep years remaining after this season.

“I zone out the recruiting stuff and focus on football and school like I don’t have any offers,” Fatheree said. “No real favorites yet. I love them all and still have a lot of research to do.”

Texas will battle it out with the likes of Oklahoma, Texas A&M and the SEC powers for Fatheree. It’s nearly impossible to find the prototypical bookend offensive tackle with the ideal size and athleticism to play on the edge, but Fatheree possesses the makings of a future star. His experience playing basketball provides him with quicker feet than most big men his size.

Fatheree might not know which school he’ll attend. He does know what he’s looking for in a program.

“Most important is education and feeling at home,” he said.

Fatheree started on varsity as a freshman. He’s now dominating as a sophomore. He says the extra experience is pivotal and that’s he’s starting to understand his position and what defenders hope to accomplish. He faced a stern test Friday in four-star 2020 defensive end Alec Bryant of Shadow Creek. The two battled throughout the night.

“I think I did well against him,” Fatheree said. “He was a fast and smart dude. It was a challenge for both of us.”

Bryant has yet to gain an offer from Texas, though he said he talks to UT assistant coach Oscar Giles every day. He was at the Cotton Bowl for the Texas-Oklahoma game and plans to visit Oklahoma in November when the Sooners play Oklahoma State. He’s also planning trips to TCU and Indiana, where his brother plays, before the end of the season. Texas would be in it if an offer is extended. The Sooners are the team to beat.

“We talk every single day. (Giles) tells me I’m going to be a part of it, but it is a process with them. I’m just being patient,” said Bryant of his contact with the Texas coaching staff. “The things most important to me are defensive scheme, coaching staff and my major, which will be sports broadcasting.”

Bryant’s team won the war, but even the junior defensive end admitted Fatheree won his fare share of battles between the two stars.

“He got me pretty good. They double-teamed me and ran away from me a lot, but I’ll give him his props. He’s a great offensive tackle,” Bryant said. “Those types of matchups make us both better for the next level. I’m thankful for the challenge.”

America’s Brightest Orange blasts some sunshine on hidden truths about No. 15 Texas