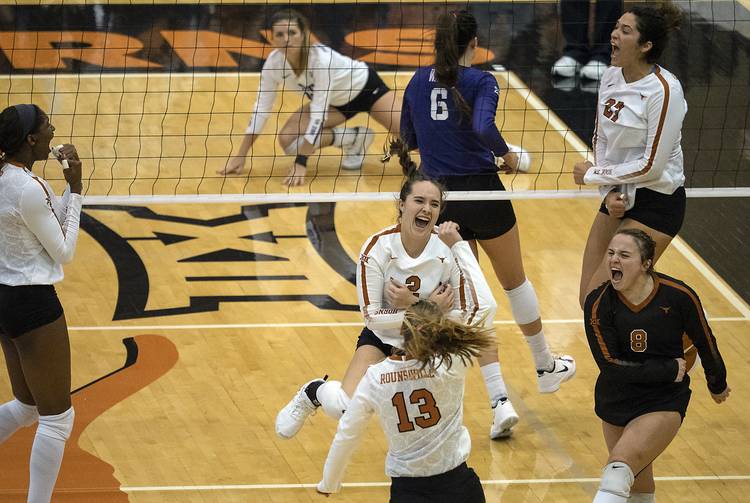 On Tuesday, members of the Texas volleyball team showed up for a practice in Gregory Gym in their Halloween costume.

Jhenna Gabriel practiced as a giraffe, but she returned to Gregory Gym the next day as a back-up quarterback with a Hollywood ending. A freshman setter, Gabriel came off the bench to lead UT to a 25-13, 20-25, 25-17, 25-23 victory over TCU. The Wednesday win was the fifth straight in conference play for Texas, the sixth-ranked team in the AVCA’s national poll.

“Our practice every day, we just go crazy and we work really hard,” Gabriel said. “It’s a really competitive environment. That’s why basically anybody can come off the bench and be able to contribute.”

Texas opened Wednesday’s action with an attacking error, but the next seven points — and the first set — belonged to the Longhorns. Texas hit .158 during a second-set slump, which extended into the third session. After falling behind 7-5, Elliott pulled sophomore setter Ashley Shook, a captain and two-year starter, in favor of Gabriel, who he said had practiced well on Tuesday.

UT responded to the line-up change and eventually went on a 12-2 run with Gabriel guiding the offense. Gabriel contributed six assists and two digs during the third set. Her highlight-reel backset for a Yaazie Bedart-Ghani kill gave UT a 16-12 lead.

Gabriel, who later assisted Bedart-Ghani on two of UT’s final three points in the fourth set, said it didn’t take her long to feel comfortable on Wednesday night. “I stepped on the court and everybody that was on the court came up to me and was like ‘Hey, you got this.’ (They) grabbed my hand and made that eye contract, just so we that we can get right into without having to go backward before we could go forward.”

Shook will be UT’s starting setter in its next match, but Elliott said, “we’re glad that we have Jhenna as part of this program to be able to do that for us.” Wednesday night belonged to Gabriel. Recruited out of Hawaii, Gabriel had primarily been used this season as a relief option on the service line. Gabriel had only seven assists over UT’s first 18 matches, but she collected 22 on Halloween. Texas was hitting .165 when Gabriel took over, but that number increased to .258 by the match’s end.

With five matches to go in the regular season, Texas (15-4; 10-1 Big 12) has two fewer losses in conference play than second-place Kansas (14-7; 7-3). Kansas beat UT on Oct. 10, but the Jayhawks must still travel to Austin next Saturday. That championship-caliber clash in Gregory Gym will be preceded by UT’s home match against Kansas State on Wednesday.

“I think we’re just starting to find our stride,” Bedart-Ghani said. “I think we’re still on that path looking for it, but you can see the progress throughout the season. I think that we’ll be peaking at the right time, which is good.”

No longer on the move, Andrew Beck leading Texas as both a captain and pass-catching tight end

The Dotted Line: The Week 10 guide to watch Texas commits