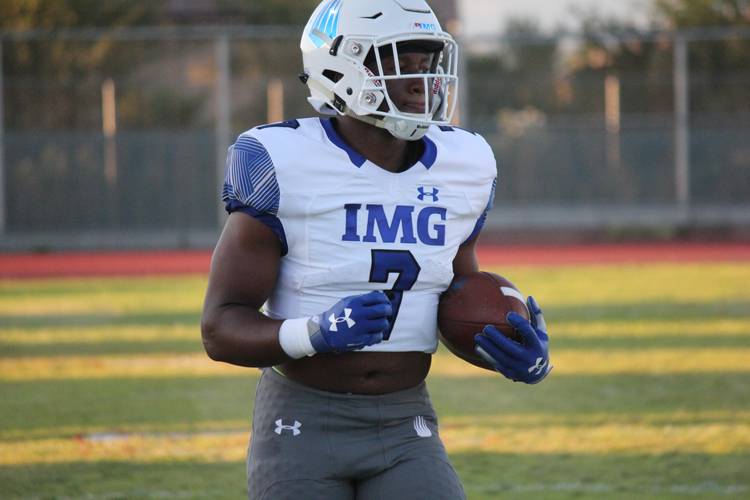 Four-star running back Noah Cain is a Texas target in the 2019 class. (Mike Craven)

Texas gets a chance to erase the Oklahoma State loss and remain in control of its own destiny with a home game against West Virginia on Saturday. The home contest also gives the Longhorns an opportunity to host important targets in the 2019 and 2020 classes. There are scheduled to be some elite 2019 targets on campus, including two taking official visits.

With less than two months until the early signing period, each of these official weekends builds in importance:

Cain plans to pick a school and sign on Dec. 21, which is the final day of the three-day period that allows for early signing. The saga at running back is now full circle. Texas always wanted Cain as the main running back in the 2019 class and the Longhorns have one final chance to impress him before he takes official visits to Ohio State and LSU. Cain started his prep career at Denton Guyer before moving to IMG Academy before his junior season. He’s a native of Louisiana and LSU appears to be the slight favorite.

It’s incredible to imagine that the Austin area possesses three of the top wide receivers in the country and there’s a good chance none of them end up staying at home. Imagine if Norman was home to three of the top players in the country and none of them became Sooners. Lake Travis’ Garrett Wilson chose Ohio State. Jaylen Ellis out of Round Rock Cedar Ridge was passed over for out-of-state targets. All that’s left is Higgins, the big-bodied receiver who spent the first half of the season out with a wrist injury. Stanford is the team to beat with Florida also in play.

New offer on the way?

The Longhorns struggled to land their top targets on the offensive line in the 2019 cycle when Branson Bragg chose Stanford and Kenyon Green picked Texas A&M. The Longhorns did snag four-star Tyler Johnson and still hold a commitment from four-star tackle Javonne Shepherd. Two isn’t enough for the class and Texas is still hoping to identify at least two more players to add before the cycle ends.

Expect one of those players to hail from the JUCO ranks. The other could be Fort Bend Dulles prospect Isaiah Hookfin. The 6-5, 270-pound three-star tackle is high on Illinois and Houston. He’ll be in Austin for the West Virginia game on Saturday and it would be surprising if he didn’t leave Austin with an offer. Texas would be his 18th offer.

Texas’ 2019 class sits at 20 commitments with November approaching. The remaining targets are relatively clear. That doesn’t mean the Longhorns aren’t working behind the scenes to sway pledges from other schools to reconsider them. One of those players is Katy Taylor offensive tackle Andrew Coker. Another is South Oak Cliff defensive end Steven Parker. Coker is committed to TCU. Parker is pledged to Texas Tech.

Texas hopes both visit in November. They’re members of the Fabulous 55 and are at key positions remaining for the Longhorns. Parker is one of the top pass rushing specialists in the state and could play defensive end or B-Backer. Coker is a massive offensive tackle with more size than Johnson and more technique and discipline than Shepherd.

Austin Todd, Ryan Reynolds will lead from the dugout at Texas baseball wraps up its fall