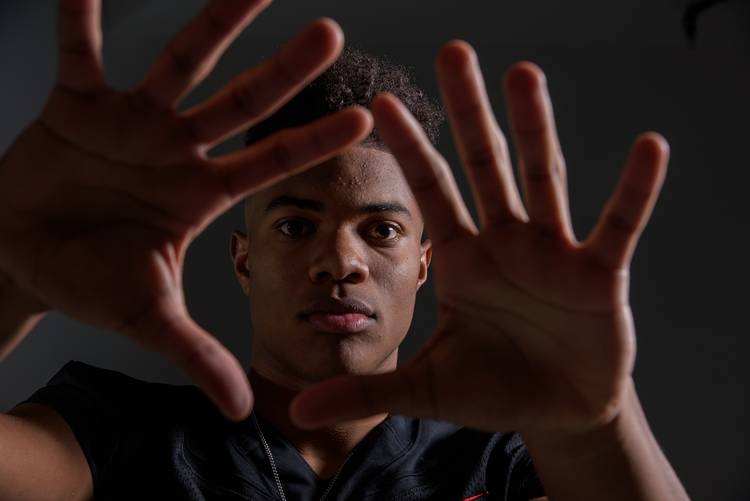 Decision time approaches for Austin Bowie wide receiver Elijah Higgins. The 6-3, 214-pound four-star prospect is one official visit away from picking his school, and that last visit is to Texas. The star wide receiver and member of the 2019 Fabulous 55 is also considering Stanford, Florida and Ohio State.

The Cardinal hold the edge leading into the final visit. The local product doesn’t want to be wowed on his visit. He lives 20 minutes from campus. He’s spent plenty of time around the staff, the players and the school.

“There’s nothing left for Texas to do to impress me,” Higgins said. “It’s just about gathering all the info I can to make the right decision. “Austin is home and the relationships I’ve built with the coaches are the advantages for Texas.”

Higgins holds 38 offers. He’s ranked No. 23 on the Fab 55, and the No. 81 overall prospect in the country and the No. 15-ranked wide receiver in the country, per the 247Sports composite. He joined fellow local wide receivers Garrett Wilson and Jaylen Ellis at The Opening Finals in Frisco and Higgins will finish his high school career at the Under Armour All-American Game in Orlando in January.

Texas was the early favorite, but the Longhorns were passed over by out-of-state programs as time went on and Higgins visited more schools. He’s a Florida native. The education at Stanford is a huge draw. Ohio State is a premier program playing for national championships on a yearly basis. No option is wrong.

“The aroma of the whole Stanford program intrigues me,” he said. “My decision will come down to how I’ll be utilized and developed as a player, as well as the relationships I have at the school.”

This was never Higgins’ plan. He admittedly lacked confidence early in his career and arrived as a freshman simply hoping to make the A team. As his stock grew, so did his confidence.

“I just loved the game of football and kept working at it,” he said. “When all the attention came, I was kind of surprised. I knew I had the talent. I just needed to believe in myself. My confidence has grown a lot. I’ve always been one of the more athletic kids on the field, so I need to play like it consistently. I’m still learning how to do that.”

The recruiting process helped polish him on and off the field.

“You meet a lot of important and influential people from all over the country, and you get to play with and meet the top players at elite camps and All-American games,” Higgins said. “Being a part of that is really cool, but there is a lot that goes into it and that can get frustrating because it isn’t an easy decision.”

Texas already holds commitments from four receivers — five if Odessa Permian quarterback Peyton Powell moves to receiver once he arrives on campus. The Longhorns are also in the mix for five-star athlete Bru McCoy, who plans on playing wide receiver and some outside linebacker in college. Former TCU commit Kennedy Lewis is another receiver leaning toward Texas.

The Longhorns would take Higgins regardless and find an open scholarship for such a dynamic player with size and athleticism. It also appears like they have contingency plans in case Higgins chooses Stanford or another school. Four-star running back Noah Cain is also on an official visit to Texas this weekend. The IMG product in Florida played as a freshman and sophomore at Denton Guyer.

Hand it over: West Virginia QB Will Grier meets Texas again, both pointing toward Big 12 title