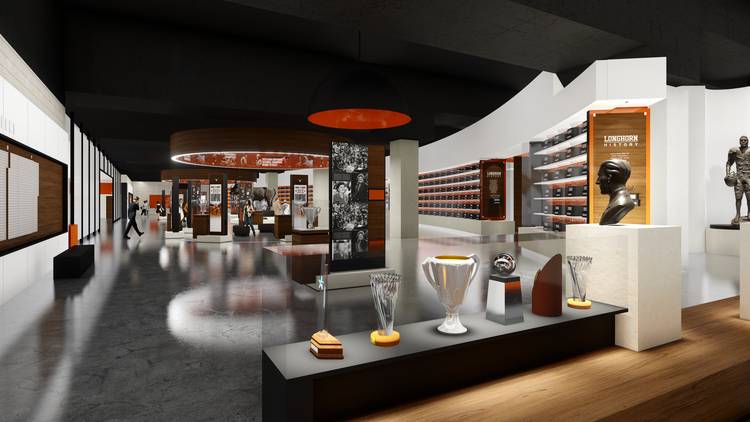 An artist's rendering of the Texas athletics hall of fame to be built in the north end zone of Royal-Memorial Stadium. (Illustration provided by UT Athletics)

The family of Frank Denius, a die-hard Longhorns fan and one of the most decorated soldiers in World War II, has agreed to make the lead donation for the school’s new athletics hall of fame at Royal-Memorial Stadium.

School officials will start construction inside the stadium’s north end zone section — currently a food court and meeting space — after the 2018 season. The area is approximately 30,000 square feet.

The facility will have Denius’ name, the school said in a statement, to “help carry on the legacy of a great Longhorn for generations to come.” Denius died in July at age 93.

Athletic director Chris Del Conte told the American-Statesman in May that the project would cost about $10 million. His vision is to have an open museum that tells UT’s entire athletic history, one that features the school’s 54 national championship teams, 589 conference titles and more than 2,500 All-Americans.

“Our goal is to have the hall of fame open by next season. By Louisiana Tech,” Del Conte said Friday, a reference to UT’s season-opening opponent Aug. 31.

The Denius family will be honored at halftime of Saturday’s game against West Virginia. Frank Denius’ name already adorns the UT football practice fields. Denius, who had a business and a law degree from UT, was a regular attendee at practice for decades.

Denius was part of the group that landed on Omaha Beach as part of the “second wave” during the D-Day invasion. He received four Silver Stars, a Presidential Citation, two Purple Hearts and other honors for his service.

“When the UT athletics staff approached the Cain Foundation Board with the opportunity to participate in the UT athletics hall of fame, we believed it was the perfect means of honoring and paying tribute to my father,” Denius’ son Woffie said in a statement.

“It will be a special area that showcases the legacy and achievements of Longhorn men’s and women’s athletics.”