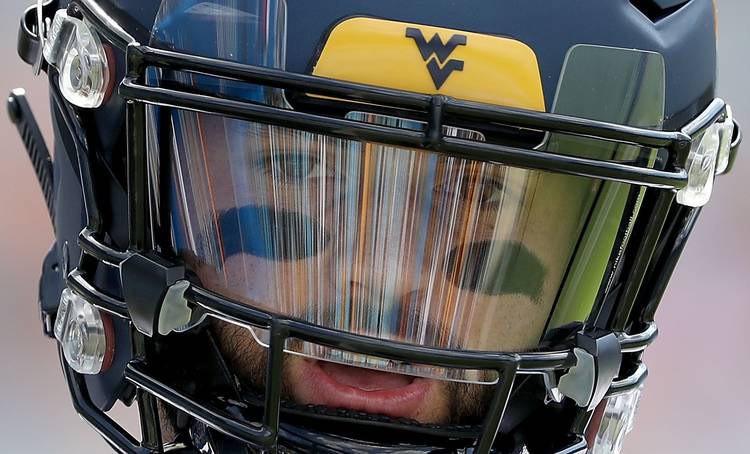 Will Grier #7 of the West Virginia Mountaineers warms up before their game against the Tennessee Volunteers at Bank of America Stadium on September 1, 2018 in Charlotte, North Carolina. (Photo by Streeter Lecka/Getty Images)

Dana Holgorsen was so frustrated about last year’s loss to Texas, he wanted to give the Longhorns the finger — only Will Grier broke his.

Deep down, the West Virginia coach believes his Mountaineers could have prevailed on that cool, overcast day last November in Morgantown had his quarterback not gotten hurt.

With about 4 1/2 minutes left in the first quarter of a scoreless game, Grier dove for the pylon and broke his right middle finger. Those close-up shots were not for the faint of heart.

“I didn’t know what happened,” said UT safety Brandon Jones, who made the hit. “I didn’t know if I grabbed his hand or his wrist. It was freaky.”

The Mountaineers lost their offensive leader not only for the rest of the game but also for the rest of the season, and eventually succumbed 28-14. For Texas, it was the team’s sixth win, which clinched bowl eligibility. The win proved critical as Texas lost its regular-season finale against Texas Tech.

“Yeah, no. I haven’t really revisited that at all,” Grier told West Virginia reporters this week. “It’s a freak thing that happened and hasn’t changed my mindset at all moving forward.”

Grier is pointing the way for No. 13 West Virginia (6-1, 4-1 Big 12) again this season. This time around, he’ll meet the 17th-ranked Longhorns (6-2, 4-1) at 2:30 p.m. Saturday with more than just bowl eligibility at stake. The winner will have a critical tiebreaker advantage in the Big 12 standings, something both teams can point to come November’s end.

Lots of index fingers and pinkies will be extended in this one, as Texas officials expect a sold-out crowd at Royal-Memorial Stadium.

“This one is one we’ve been looking forward to for a while,” Holgorsen said. “It didn’t quite end the way we wanted it to last year, and we haven’t forgotten about that.”

Holgorsen doesn’t hold back against the Horns. Two years ago in Austin, he was caught in a hot-mic moment on the field commenting about his team’s, ahem, bigger manhood.

This year, Holgorsen may be content to have the better overall team, statistically speaking, anyway.

On paper, this game is a real toss-up. West Virginia averages 42.3 points per game compared to UT’s 31.3. The two have similar defensive numbers, although the Mountaineers have slightly better ones. Texas is a 1 1/2-point favorite, which indicates oddsmakers aren’t sure, either.

Several UT players said they noticed a change last season after Grier got hurt. The Mountaineers were deflated.

“When your starting quarterback goes out, it’s going to be different,” defensive end Charles Omenihu said. “That’s their guy. He’s the one that makes them go. He’s the one who makes them lethal.”

Said Jones: “Overall, we just capitalized and knew what we had to do. For us, the biggest thing was stopping the run. Once you’re able to do that, especially with a guy who doesn’t have as much experience as Will Grier, we just had to execute and do our job.”

West Virginia officials started this season pushing Grier for the Heisman. Or, to be more precise, it was #Grier7Heisman. He ranks in the top 10 nationally in a slew of statistical categories and has a lengthy list of accolades.

Simply put, it’s a dangerous test for a Texas pass defense that struggled last week against Oklahoma State’s Taylor Cornelius. Cornerbacks Kris Boyd and Davante Davis were both in the spotlight for all the wrong reasons against the Cowboys as the Horns lost 38-35.

“That stuff is overrated,” UT defensive coordinator Todd Orlando said of Boyd and Davis’ first-quarter suspensions. “This is grown-man stuff.”

Holgorsen will no doubt examine Cornelius’ jump ball to Tylan Wallace, who leaped over Boyd and caught a 36-yard touchdown pass. “Kris Boyd has all the tools,” Orlando said. “He just had to put it all together.”

Orlando acknowledged that Iowa State had success by dropping eight defenders into coverage and essentially denying Grier anything deep. Sills’ 18-yard touchdown catch early was WVU’s only offensive touchdown. The Mountaineers also scored on a 72-yard blocked punt return. Otherwise, it was all Cyclones in a 30-14 win.

“They kind of unveiled that drop-eight package against us last year in Ames on Thursday night, and they have had a lot of success with it,” Texas coach Tom Herman said. “When they did bring pressure, it was extremely effective, and it hit home.”

Herman said Iowa State essentially admitted they were going to use a three-man rush, and when they did blitz, “the element of surprise was there.”

How did Iowa State do it offensively? By running the ball and the clock. Running back David Montgomery ran it 29 times for 189 yards as the Cyclones won the time of possession (37:21).

Texas’ running game is average when compared to the rest of the league. The Horns average 154 yards per game. Freshman running back Keaontay Ingram has never carried the ball more than 19 times. It may take that and more to keep the chains moving and Grier on the sideline.

This will be the second time this season the stadium has been sold out. Texas saw its six-game winning streak broken last week, but all of the team’s big-picture goals remain intact. The same could be said of West Virginia, too.

The Longhorns rebuilt their confidence in September and October. November is when teams win championships.

“A lot of guys in our locker room have been to Austin, been on that field,” Holgorsen said. “I don’t think we’ll be surprised by any of the excitement that they have surrounding around their program at this point in time.”