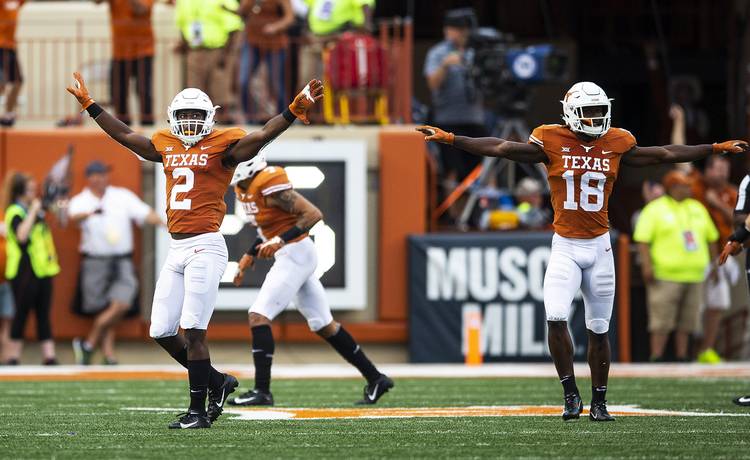 1. Will Kris Boyd and Davante Davis redeem themselves?

Texas gave up 17 points and 260 yards in the first quarter of last week’s 38-35 loss at Oklahoma State. The Longhorns’ starting cornerbacks sat the quarter out with suspensions. Boyd struggled when he did get into the game in the second quarter, and that led to a spat on social media with former Longhorns linebacker and current ESPN analyst Emmanuel Acho. Boyd, who is a Thorpe Award semifinalist, and Davis will be kept busy this week; West Virginia quarterback Will Grier ranks sixth nationally with his 25 touchdown passes.

2. How will Texas fare against the run?

The success of West Virginia’s offense revolves around Grier’s arm, but it would be foolish for Texas to overlook the Mountaineers’ running game. No WVU player has 65 carries this year — three Longhorns have hit that mark — but running backs Kennedy McKoy, Leddie Brown and Martell Pettaway all average better than five yards per run. Texas has the Big 12’s third-rated run defense, but two Oklahoma State players topped 80 yards last week and quarterback Taylor Cornelius had two game-sealing runs in the fourth quarter.

Texas’ tight end has saved his best for last; the senior has 18 catches for 183 yards and a touchdown — in his first three seasons, he had 12 total catches for 159 yards. Beck has caught a pass in all eight games this season, and perhaps both he and backup Cade Brewer will see additional targets on Saturday. In UT’s 28-14 win over West Virginia last year, Sam Ehlinger’s two touchdown tosses were thrown to tight ends Kendall Moore and Chris Warren III.

4. Will a Longhorn break free for a big play?

Texas is one of only five schools in the country — along with BYU, Central Michigan, Florida Atlantic and Rutgers — that have yet to record an offensive play of 50 or more yards. Meanwhile, West Virginia is one of only two teams in the country that haven’t allowed a 50-yard play in 2018. Lil’Jordan Humphrey’s 47-yard touchdown catch against USC is the Longhorns’ longest play from scrimmage and they haven’t had a run longer than 35.

Earlier this season, a school-record 103,507 fans showed up at Royal-Memorial Stadium to watch unranked Texas beat then-No. 22 USC by 23 points. Texas has already announced a sellout for Saturday, but will the crowd be bigger than Texas-USC? The stadium is designed to sit 100,119. The Longhorns’ last three home games against West Virginia averaged 98,644 fans, though the 2012 game drew the third biggest crowd in DKR history.

Hand it over: West Virginia QB Will Grier meets Texas again, both pointing toward Big 12 title