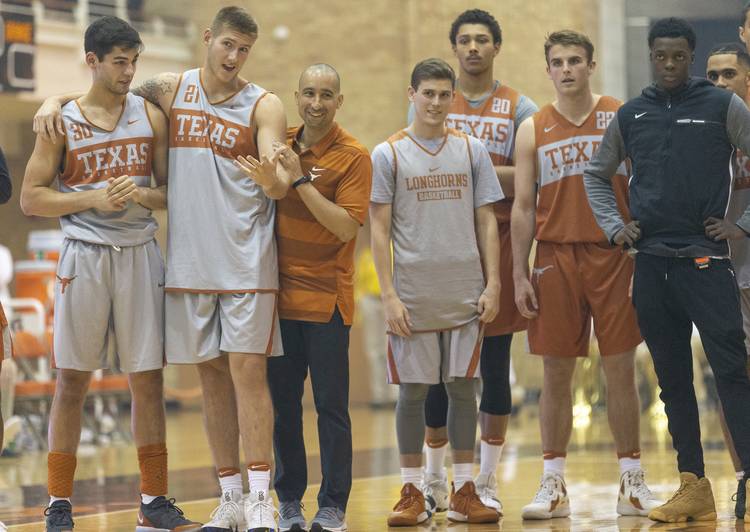 In a bid to jump-start his team’s offense, Texas coach Shaka Smart has been pushing somewhat of a run-and-gun philosophy during the preseason.

If the Longhorns score within the first seven seconds on the shot clock, that’s worth five points during practice scrimmages.

“It’s good to have plays, but I feel like basketball is an up-and-down sport,” guard Elijah Mitrou-Long said. “The first seven seconds, you get that ball, push it up and get a layup, why do you need to run a play?”

Scoring and shooting have been Texas’ chief concerns the last two seasons. It’ll be the primary focus of the 2018-19 season, too, starting with Tuesday’s season opener against Eastern Illinois.

Let’s say the Horns do get up and down more this season. How will anyone know if it’s paying off?

“Don’t take this as a smart-ass response,” Smart said, “but hopefully the biggest thing you’ll see visually is the ball go through the basket more on our offensive end. I think we’d all enjoy seeing that.”

Texas finished last in the Big 12 in scoring two years ago and ninth last season. Slice the data analytically, and it’s just as cringe-worthy. The Horns ranked 316th nationally in offensive efficiency and tempo, according to Ken Pomeroy’s data site.

In human speak, Texas averaged 65.2 possessions per game last season. Sometimes, the execution in the half-court offensive sets was painful. Other Big 12 teams, like Oklahoma (75.5) and West Virginia (69.2), gave themselves more chances by getting up and down faster.

Guard Matt Coleman is excited to see how it all plays out. “The time is now. It’s here. This is what we’ve all waited for — to make a statement from the jump,” he said. “Texas is a really good basketball team. That’s all.”

Here’s a look at five other storylines for the upcoming Longhorns’ men’s basketball season:

1. Man the press: With no true one-and-done caliber player at his disposal, Smart can unleash his troops however he sees fit. That means fans could see more full-court pressing this season, something that was Smart’s calling card at Virginia Commonwealth.

Smart has admitted that high-level recruits don’t want to press. It’s too taxing, they believe, and nobody presses in the NBA. Recruits just don’t want to do it. In fact, Texas had to show Mo Bamba hard data during the recruiting process that compared UT’s amount of pressing to that of Kentucky’s.

Texas will never be “Press Virginia.” But a few more turnovers wouldn’t hurt. The Horns forced an average of 12.5 turnovers per game last season.

2. Grab those boards: Bamba did average 10.5 rebounds per game last season, the highest total in the Big 12. The future Orlando Magic center was the only Big 12 player in double figures. By comparison, Jericho Sims averaged just 3.9. Sims needs to grab everything in sight this season.

He’s not the only one. If you can fog a mirror, you can go rebound. Dylan Osetkowski averaged 7.2 boards per game last season. If his 3-point shot isn’t working, Osetkowski can get his elbows dirty. Guards, too.

If Texas can’t win some easy rebounding battles, it will be a long year down low.

3. Make some free throws: Texas was the worst free-throw shooting team in the Big 12 last season. The Horns were the only team to make less than 70 percent overall.

Smart hammered home one eye-opening statistic throughout the offseason. Texas was 8-9 last season in games decided in the last minute or overtime. That means a bulk of games came down to one or two rebounds, one or two baskets and a bunch of free throws.

“It all just starts on defense,” Sims said. “I think we have really tough guys on our team that will get after it, try to win 50-50 plays.”

Sims shot 42.6 percent at the stripe last season. He switched to a right-handed shooting motion during the offseason, and the naturally right-handed writer feels more confident. If Sims gets fouled as much as he hopes and can make free throws, the Horns will get better in a hurry.

4. Freshmen step up: The Horns need multiple freshmen to make strong impacts. It’s just hard to peg which ones will contribute early.

Veterans have been talking up 6-11 Jaxson Hayes from Loveland, Ohio. Smart has high hopes for Kamaka Hepa, a long-range threat from Alaska. If he could make some 3-pointers from there, it’d be great.

Freshman guard Courtney Ramey could have the highest risk-reward ratio. The St. Louis product left Webster Groves High School as the all-time leader in points (1,838) and assists (521). Division I guards will actually prevent you from scoring, though.

5. Best players must be stars: Finally, this team needs its veteran players to play like veterans and carry themselves as such. Coleman left no doubt about who’s doing well. “Kerwin Roach has been our best player in practice. He’s playing at a high level,” he said.

Roach is also a team leader who got himself suspended for the season opener for an undisclosed violation of rules for the second time in his career.

Roach is the face of the program, along with Coleman, Osetkowski and Sims. These four must set the tone as Smart cannot do everything.

If Texas gets all four to elevate their games, and get some help from the freshmen, it could have a solid team when Big 12 play begins.

‘We’ve just got to make the play’: Conversion leaves the Texas defense looking for answers