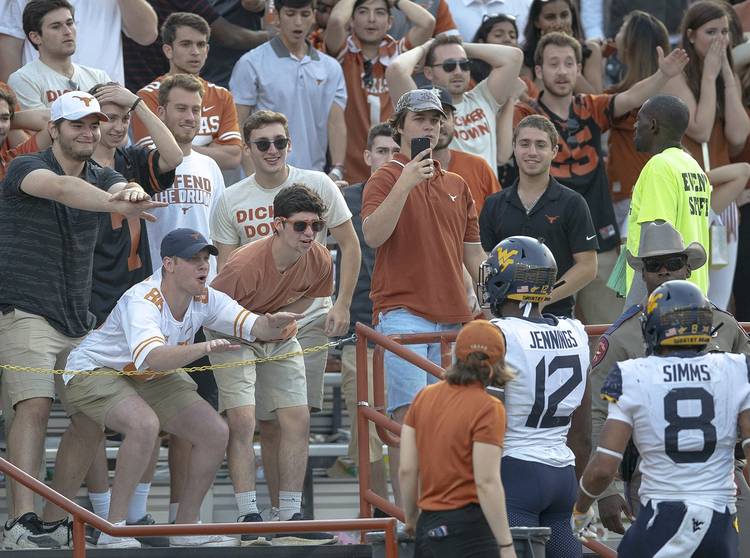 Throughout this season, Texas players have insisted that they train for chaos.

Three weeks ago, chaos presented itself in the form of Baylor taking three shots at the end zone in the final seconds of UT’s 23-17 win. Chaos could be found in close calls against Tulsa and Kansas State. That 48-45 victory over Oklahoma was chaotic, right?

On Saturday, though, chaos threw a curveball.

Texas dropped to 4-2 in Big 12 play with a 42-41 loss to West Virginia at Royal-Memorial Stadium. West Virginia receiver Gary Jennings Jr. managed to get a foot down in the back of the end zone on a 33-yard touchdown catch with 16 seconds remaining. Quarterback Will Grier then ran in a two-point conversion to lift the Mountaineers (7-1, 5-1 Big 12) to the thrilling triumph.

WILL GRIER. 2-POINT CONVERSION WITH THE GAME ON THE LINE.

This man's got ice in his veins, y'all. pic.twitter.com/CQikTxeA8J

Texas (6-3, 4-2) hadn’t allowed a two-point conversion since a 50-43 loss at Cal in 2016. That 30-game streak ended when Grier took the shotgun snap and sold a draw up the middle. He then bounced outside and was not touched as he scampered in.

Texas defensive tackle Chris Nelson said after the game that “there’s supposed to be an edge guy out there, but obviously there wasn’t.” The player on the edge of the line was sophomore Ta’Quon Graham, who tried to bully his way inside when Grier hinted that he’d go up the middle. Two other Longhorns were in the vicinity, but linebacker Jeffrey McCulloch also was sold by Grier’s initial draw and cornerback Kris Boyd was preoccupied with receiver David Sills V.

“We’ve had this two-point conversion in our back pocket all year,” West Virginia coach Dana Holgorsen said. “Got a lot of options. You put No. 7 in a position to where he has different options, he’s going to be tough to stop.”

The decisive play was run after three timeouts were called. Since Martell Pettaway and Kennedy McKoy had run for 215 yards on 26 carries, Nelson said he expected a running back to get the ball. Grier, however, lined up in an empty backfield.

Texas defensive end Charles Omenihu did not buy that West Virginia would try to pass out of that formation. Nelson said he heard Omenihu bark that Grier would keep the football, which a frustrated Omenihu later confirmed.

It was not lost on Locke that Grier’s run came one week after Oklahoma State quarterback Taylor Cornelius sealed a 38-35 win with a first-down run on a third-and-6 play. For the year, Cornelius and Grier are averaging 2.8 and minus-2 yards per run, respectively.

“We’ve just got to do a better job of just containing and going our job, not trying to be the big man or anything like that,” Locke said. “It was just a bad situation.”

In the end, West Virginia threw for 346 yards and ran for 232 yards. Those 578 yards of total offense were the most surrendered by Texas since Baylor had a 624-yard day in Austin in 2016. Since two-point conversions don’t count on the stat sheet, that total didn’t include the evening’s biggest three-yard gain.