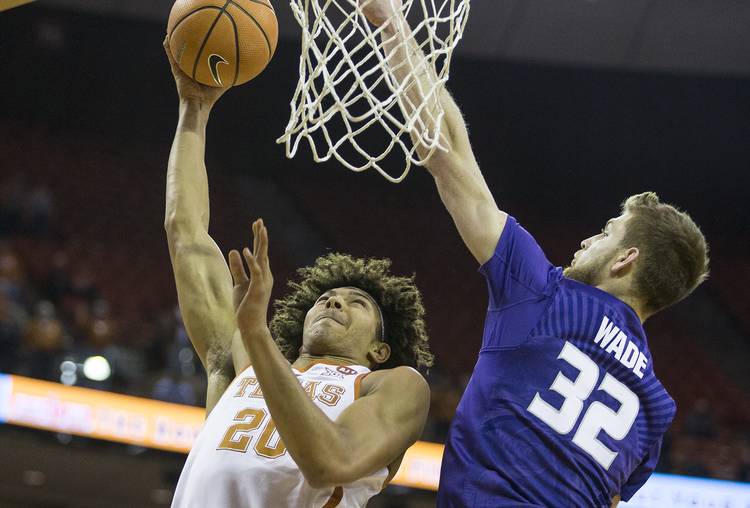 Jericho Sims’ teammates swear he’s starting to open up. Pulling words from the 6-9 freshman last season was like pulling teeth. Nowadays, the Texas sophomore is a regular Chatty Cathy.

If reporters ever get this guy telling jokes, watch out. He’ll be a star.

One word, one rebound, one dunk at a time, perhaps, starting with Tuesday’s season opener against Eastern Illinois at the Erwin Center.

The Longhorns may not have an NBA-caliber freshman center in the middle. But they do have several athletic big men with freakish talent. Sims is the clear-cut leader in that category, which means he’ll be in the spotlight all season long — ready or not.

Mo Bamba, now toiling in Orlando, led the Big 12 last season with 10.5 rebounds per game. Somebody needs to fill that vacuum. Sims started four games late in the season when Bamba was battling a sprained toe. The Minneapolis product averaged 9.8 points and 9.8 rebounds in Bamba’s place.

“If you accumulated the time he would’ve played compare to Mo’s time, his stats would show really well,” said UT guard Matt Coleman III. “This year, you see him opening up a little more, getting more confident and comfortable.”

Sims’ season numbers weren’t necessarily dazzling. He averaged 5.0 points and 3.9 boards per game. Still, it was obvious something was cooking behind Bamba.

“Jericho, it’s going to be fascinating to watch,” UT coach Shaka Smart said. “I will tell you, I don’t expect him to be necessarily the most consistent guy in the league. I would love that. But he’s still a work in progress from the standpoint of body of work and just putting great days on top of great days.”

When you survey the Big 12 landscape, several big men can be spotted with ease. West Virginia’s Sagaba Konate is the league’s best shot-blocker. Kansas’ Udoka Azubuike has tremendous power down low. Iowa State’s Cameron Lard blossomed last season. Sims should be among that group come January.

“What do I need to do to be in that conversation? Well, just outplay them,” Sims said.

How’s he plan on doing that?

“Just being more relentless, going after it every time,” he said. “Putting a body on somebody, not just running to the glass. If I can get fouled a lot, it means a lot more if I step up to the line and make them.”

Let’s talk about those free throws. Sims was 29 for 68 at the stripe last season, a 42.6-percent success rate. He used his left hand at the free throw line to shot-put the ball toward the rim.

This offseason, he started shooting free throws with his right hand. He likely saw the success Ben Simmons had switching hands. NBA defenses used the hack-a-Shaq strategy with Simmons, and he finally had to address his woeful free-throw percentage.

“From a free throw standpoint, I just have more control somehow with my right,” Sims said. “It’s just not as shaky.”

Sims said he didn’t even think about switching hands until someone suggested it. “When I shoot floaters and hooks, I’m really good with my right,” he said. “I naturally go to my right, even if I’m shooting off my right shoulder. In the past, I could shoot threes with my right hand, but it’s just always been my left, since that was suggested to me a long time ago.”

“Physically, he’s a monster. He’s gained a lot of weight. His jump shot at the free throw line is amazing,” guard Elijah Mitrou-Long said. “I don’t think anybody can really stop him in the post. He could stop himself, if he’s not mentally right, but I don’t think that’s the case.”

Sims is ready to face just about anyone wearing another jersey. When he spoke to reporters on Sunday, he had a two red scrapes across his left shoulder from where someone had raked him in practice.

“Yeah, it gets physical in there with other big guys,” he said.

Smart would prefer Sims be just as physical all season long.

“What we’ve tried to impress upon him is just the understand that, now as a sophomore, you’re asking him to put more and more stretches of consistent play together to help our team,” Smart said.

Hamm injured: Sophomore Royce Hamm Jr. suffered a sprained medial collateral ligament injury over the weekend and will need further tests, Smart said Monday. He is not expected to play against Eastern Illinois, however it’s not expected to keep Hamm sidelined long.