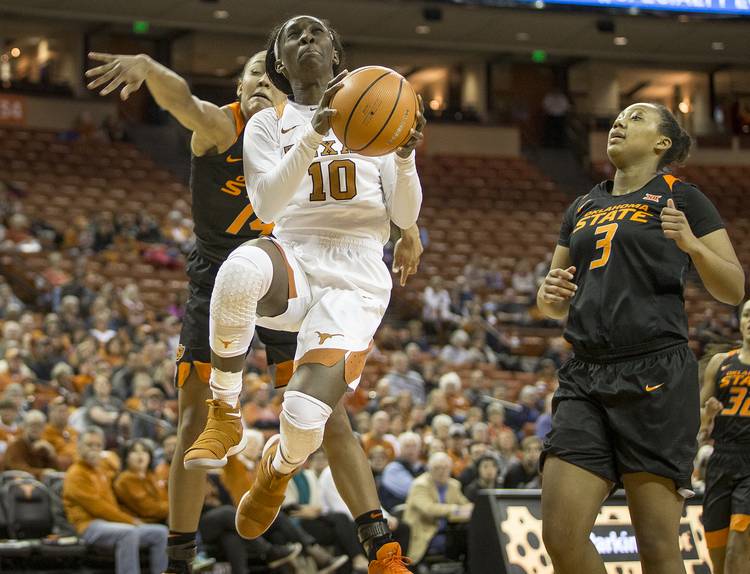 Texas guard Lashann Higgs returns for her senior year. She should be the starting shooting guard. NICK WAGNER / AMERICAN-STATESMAN

When they graduate in 2022, the players who comprise the Texas women’s basketball freshman class will be remembered for taking the Longhorns to the next level.

That’s at the top of Karen Aston’s wish list. It’s too early to make bold statements, but this might be the best crop of freshmen she has introduced during her seven years as coach of the Longhorns.

Freshman forward/post Charli Collier will have an immediate impact. A graduate of Barbers Hill High in Crosby, Collier was ranked as the No. 1 forward in the country by ESPN. At 6-5, her height and versatility will complement senior post Jatarie White, the former South Carolina transfer who came on strong during the postseason last season.

The Longhorns open the season against Duquesne Thursday night at the Erwin Center.

“As a freshman, my biggest goal is just to play my part and get better each day,” Collier said. “Your freshman year is your learning experience. This is when you learn everything. I just want to be a sponge right now.”

Beating Baylor for the Big 12 championship remains one of UT’s chief goals. The Longhorns also would like to advance past the Sweet 16 and have a legitimate chance of reaching the Final Four.

ESPN ranked UT’s freshman class No. 3 in the country.

Collier has already been honored as the Big 12’s preseason freshman of the year. Guards Joanne Allen-Taylor and Audrey Warren have looked good in practice, giving Texas quality depth at the position. The most intriguing player might be Prince, who broke her right leg during a USA FIBA game in August in Mexico City. The 6-7 post left her stamp as a shot-blocking defender with a soft shooting touch in high school; when she returns from injury — whether it’s this year or next — the Horns will have one of the tallest frontcourts in the country when Prince hovers the paint with Collier and White.

“The freshmen are all doing really well,” White said. “For this to be their first preseason and for them to be thrown into the fire already, they’ve done really well. It took them a little bit, but they see that they have to bring it every day.”

There are a few other story lines to follow this season:

Long-range goal: The addition of Danni Williams should open UT’s three-point shooting game. Last year the transfer guard led Texas A&M with a school single-season record 71 treys. Brooke McCarty paced Texas last season with 64 three-pointers and fellow graduate Ariel Atkins had 50. In the past four years, Texas has ranked ninth, eighth, 10th and eighth in the Big 12 in three-pointers made per game.

Lineup in flux: With 6-3 forward Joyner Holmes (right ankle surgery) and Prince  sidelined to start the season, expect the Longhorns to utilize a three-guard starting lineup. You can pencil in junior Sug Sutton at point guard and senior Lashann Higgs at shooting guard. Williams’ shooting touch and experience — she led the SEC in minutes played per game (33.5) last season — likely will put her in the starting five.

Watching Waco: Once again, Baylor and Texas are 1-2 in the Big 12 preseason poll. Baylor still rules the conference but UT has shown progress in recent years. We’ll know more about the Big 12’s pecking order when they meet on the court Feb. 4 in Austin and Feb. 25 in Waco.