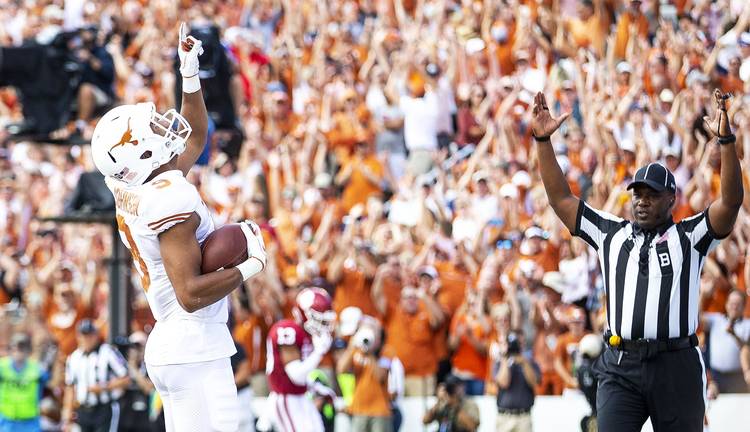 Texas wide receiver Collin Johnson (9) celebrates a touchdown reception in the first quarter of a game against Oklahoma at the Cotton Bowl in Dallas on Oct. 6, 2018. [NICK WAGNER/AMERICAN-STATESMAN]

The number 27 also represents the number of points the Longhorns have scored on first possessions this season.

Much has been made of the struggles of the Texas defense, which has allowed first-drive points in seven of its nine games. The offense, however, has kept pace for the most part. The Longhorns have scored on five of their first drives. Another opening drive ended with a missed field goal against TCU.

The Longhorns’ successful opening drives have been capped in the following fashion:

Like most teams, Texas (6-3, 4-2 Big 12) enters every game with an offensive script. Humphrey said the Longhorns “have some plays that we want to go to at first and get a feel for the defense.” Both he and Shackelford said this week that the vibe in the huddle is as important as the script.

“It’s just coming out with energy and not tip-toeing and feeling around the opponent and how they’re going to play,” Humphrey said. “It’s just going out there and knowing we’re a great offense, a high-powered offense, and executing.”

Said Shackelford: “We work best as an offense when we’re relaxed and just having fun playing football. I say it’s not so much scheme, but just mentality.”

Texas has yet to go three-and-out on an opening drive. The Longhorns average 3.6 yards per rush on those possessions. Ehlinger has connected on 20 of 33 first-drive attempts.

“(We’re) just taking what the defense gives us and not doing too much,” Devin Duvernay said. “Everyone just doing their job, no one trying to be a hero, trying to do anything special.”

Texas Tech (5-4, 3-3) is allowing 30.7 points per game, which ranks 88th nationally. Ole Miss, Houston and West Virginia each scored on their first drives against the Red Raiders. Over its last four games, however, Texas Tech has opened by forcing three punts and intercepting Oklahoma quarterback Kyler Murray.