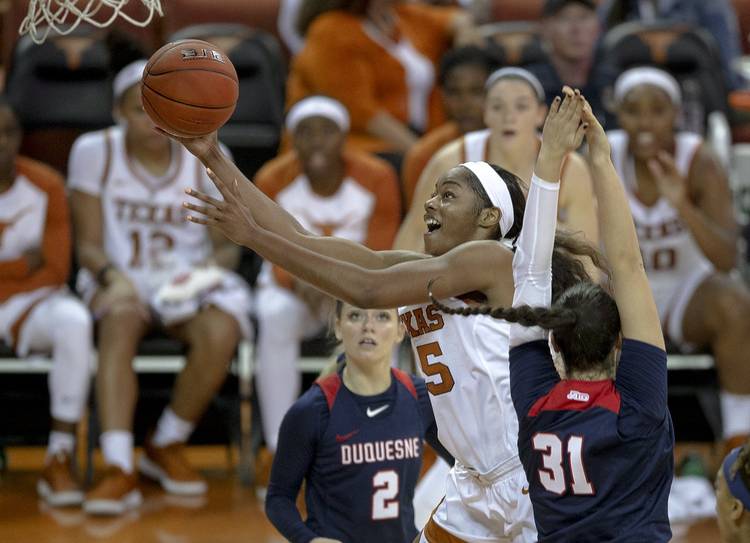 A shooting star was discovered Thursday night that was not visible in the Texas solar system last year.

Her name is Destiny Littleton, a sophomore from California who scored a total of 17 points in her freshman season. On a team that already has established stars, the 5-9 guard looked fresh and ready in the Longhorns’ season-opener.

Lashann Higgs opened her senior season with a game-high 20 points and senior post Jatarie White contributed 10 points and a team-high 10 boards, but the night belonged to Littleton.

It might have been appropriate that she walked into the post-game press conference with ice packs wrapped around both knees. She was a cool customer all night, hitting a pair of early long three-pointers to jump-start the offense.

“I went back to what I knew,” Littleton said. “I grind. I’m a grinder on a daily basis in practice. I keep focused whenever we have practice. Every rep matters. When I started in college, I didn’t think that way.”

Littleton said she paid more attention to nutrition and conditioning in summer training camp. She resembled the player who averaged more than 40 points a game during her senior year at The Bishop’s School in La Jolla, Calif., two years ago.

Texas coach Karen Aston was not surprised by Littleton’s game.

“I would have been surprised if she had not performed,” Aston said. “What she did tonight didn’t surprise me at all.”

It was also a special night for Higgs, the 5-9 shooting guard from Round Rock who shot 9 for 16 from the field before leaving early in the fourth quarter. This marked the fifth time in her career she has reached 20 points.

Higgs opened the season with a layup just nine seconds into the first quarter and the rout was on.

Duquesne, playing in the state of Texas for the third time in school history (1,208 games), shot 26.8 percent from the field (15 for 56) and never challenged the Horns.

The game also marked the college debut of freshman forward Charli Collier, ranked by ESPN as the nation’s No. 2 high school recruit in the country last year. She entered the game with 5:34 left in the first quarter, and her first bucket was a left-handed floater with 1:51 remaining in the quarter. She finished with five points and five fouls.

After missing her first six shots as a Longhorn, Texas A&M graduate transfer Danni Williams hit a three-pointer from the right corner with 8:54 left in the third quarter.

The Longhorns improved to 34-11 in season openers, 41-4 in home openers. Forward Jada Underwood, who has performed well in practice, made the first start of her career, contributing 4 points and 2 rebounds.

Duquesne (0-2) was led by Kadri-Ann Lass, who had 12 points. Coach Dan Burt offered no excuses, saying Texas dominated every phase of the game.

“We are not going to out-athlete or outsize anyone,” Burt said. “So when you play a team like Texas, you can’t shoot 21 percent (in the first half) the way we did tonight.”

After losing Tuesday at TCU, Burt said it his team “had a bad business trip.” But he did find something he liked about Austin.

“I can do without the traffic here, but the lime scooters were a lot of fun,” he said.

Texas (1-0) will now look ahead to its first road game of the season — Monday night at North Texas.