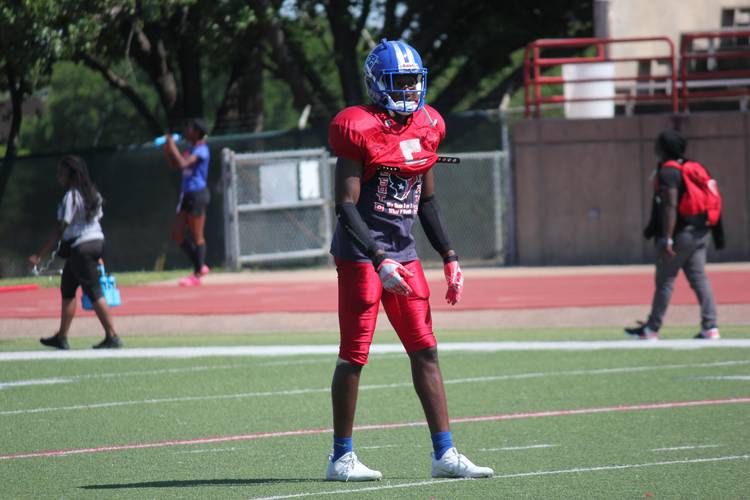 Duncanville safety Chris Thompson Jr. is ranked No. 12 on the Fab 55. (Mike Craven)

“The most impressive thing to me on the visit was the confidence in the offensive line play. I hung out with coach Hand and the big guys more than anyone else on the visit,” Cain said. “This is a business decision. All the hype disappears once you sign on the dotted line. Nothing is more important to a running back’s success than a good offensive line.”

Cain attributes his mature take on the recruiting process to his time at IMG Academy. The former Denton Ryan product swears by its positives, though he admits negatives are attached. His season is over. Instead of readying for the playoffs, Cain is focusing on recruiting.

“I do miss that playoff atmosphere and the Friday night lights of Texas high school football,” he admitted. “The plus side is I’m healthy and I get to enroll early at the university I choose. I get more than a month to really do my research, sit down with my family and make the best decision.”

The Longhorns are in the mix. Cain doesn’t mind sharing playing time with guys like freshman Keaontay Ingram and current commit Derrian Brown. Cain split carries for two years at IMG with five-star running back and fellow Texas target Trey Sanders. Sanders is trending toward Alabama. Texas is focused on Cain.

Cain is focused. He knows what he wants in a school and the official visit last weekend was the first of a whirlwind schedule in November with four more to go. He’ll pick a school in December and will take official visits to Penn State, Georgia, Ohio State and LSU. A trio of factors are important to him.

“First, it is about how comfortable I am at the school and with the team and coaches,” he said. “Second is academics and how that school can set me up for the future after football. Last is early playing time. I want a place I can contribute to the success of the team early.”

The Longhorns swept the leg of the state in the 2018 class when it inked the three top safeties and best two cornerbacks in the entire cycle. Those signees are already paying dividends with Caden Sterns, B.J. Foster and Anthony Cook playing as freshmen. The 2020 secondary class presents a similar opportunity because of the pure amount of available talent.

The top safety target is Duncanville’s Chris Thompson. The four-star is a national top-100 prospect and one of three in-state safeties with an offer from the Longhorns, joining Darius Snow and Bryson Washington. The 6-2, 195-pounder helped lead Duncanville to a district title and an undefeated regular season.

“I definitely got stronger, faster and gained more confidence in my ability this year,” he said. “I have the most upside playing safety because I can move my feet as if I was a corner, but coming downhill and fitting on tackles is almost second nature.”

Thompson said Texas and assistant coach Craig Naivar are aggressively instilling to Thompson that he’s UT’s No. 1 target at the position. The junior said Ohio State and Texas A&M are making similar pushes. It’s too early for him to pick a school, but he already understands what he wants in a program.

“I’m looking for a football environment where I could also get a great education,” he said. “I want coaches that are honest and a place that can groom me into an NFL player.”

The three-star wide receiver from Melissa announced he’ll decide between Texas, TCU and Florida this afternoon via Twitter earlier in the week. The 6-3 playmaker pledged to TCU in June but backed off that commitment in October following an official visit to Texas. The Longhorns were considered the leader at the point and nothing has changed with the decision looming.

Lewis would be the fifth receiver to pick Texas in the 2019 class. Sixth, if Odessa Permian quarterback Peyton Powell moves to receiver in college. Lewis is unique to those other commitments because of his height. He’s a true outside receiver who can provide size mismatches similar to what Collin Johnson and Lil’Jordan Humphrey do for the Longhorns.

A Lil’ style: Texas WR Lil’Jordan Humphrey has been a ‘Swiss Army knife’ for the Longhorns