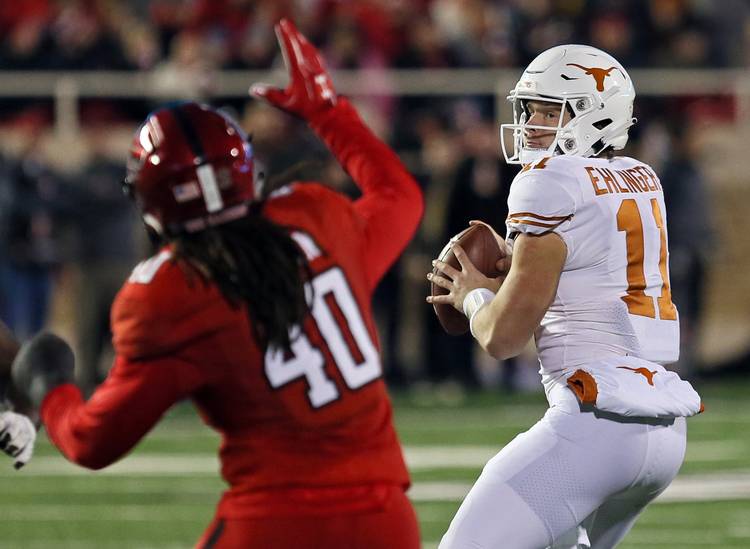 LUBBOCK — There were 163 snaps taken in No. 19 Texas’ 41-34 win at Texas Tech on Saturday night. Here are five that ended up making a big difference:

Like clockwork, Texas gave up points on its opponent’s first drive as Texas Tech took the opening kickoff and marched to the end zone. Texas Tech quarterback Jett Duffey put the Red Raiders up 7-0 on a 5-yard touchdown pass to T.J. Vasher. The UT defense has given up six touchdowns and two field goals on 10 initial drives this season.

The defense found some redemption on Tech’s next possession. The Red Raiders faced a first-and-goal at the Texas 1, but running back Da’Leon Ward lost 2 yards. After muffing but recovering the next snap, a scrambling Duffey threw an ill-advised pass that senior cornerback Davante Davis intercepted — the first pick of the season for Davis.

Texas gave up a season-high 595 yards Saturday night. Davis’ interception, though, was the first of three turnovers that Texas caused in its red zone. In the second half, both Davis and fellow cornerback Kris Boyd forced and recovered fumbles by Duffey inside the 20.

Leading 17-10, Texas drove to the Texas Tech 2 on the second half’s opening drive. The Longhorns then gained only a yard on three straight runs. Texas kept its offense on the field for a fourth-down conversion, and Sam Ehlinger found Devin Duvernay in the end zone on a play-action pass.
Ehlinger told reporters after the game that his first option — tight end Andrew Beck, who caught a fourth-down pass on a second-quarter touchdown drive — was defended well on the play. Since Duvernay “did a great job with his release to get leverage on his corner,” he provided the quarterback with an acceptable backup plan.
The touchdown catch was the shortest of Duvernay’s career. The junior entered the game averaging 61 yards on five scores. Duvernay later scored on a 39-yard grab in the fourth quarter, so that average dipped to 49.3 yards.

As far as the record books go, the most notable of Ehlinger’s 34 pass attempts Saturday fell incomplete. In the fourth quarter, Beck dropped a third-down throw.  The pass was Ehlinger’s 274th straight without an interception, breaking a record for Big 12 quarterbacks set by former West Virginia star Geno Smith.

Ehlinger has not been intercepted since UT’s final offensive play in its season-opening loss to Maryland. He has since gone 184-for-280 for 2,220 yards and 18 touchdowns. Among the 40 FBS-level quarterbacks with 300 pass attempts this year, only Ehlinger and North Texas’ Mason Fine have been intercepted fewer than three times.

UT took its second 17-point lead when Duvernay scored his second touchdown with 10:26 remaining. Texas Tech, though, responded with three scoring drives, a recovered onside kick and a three-and-out defensive stand. To cap the comeback, Tech put together a five-play, 77-yard drive started by Antoine Wesley’s 47-yard reception and ended by the receiver’s 9-yard touchdown catch.

On the touchdown, Wesley lined up outside and ran a short route toward the middle of the field. Boyd was unable to tackle him before he crossed the goal line. Earlier in the second half, Wesley had beaten Boyd for a 57-yard touchdown. He finished the game with eight catches for 171 yards.

5. A big moment for Lil’Jordan

Wesley tied the game with 1:45 left in regulation, which left Texas plenty of time to go for the win. Texas drove from its 25 to the Tech 29 in six plays, and that left the team in field-goal range since Cameron Dicker had already hit 52- and 46-yarders that evening. Texas coach Tom Herman did not play it conservatively, though.

Coming out of a timeout, UT receiver Lil’Jordan Humphrey drew single coverage as he ran downfield. Ehlinger lofted a pass, and Humphrey out-leaped Taylor-raised cornerback Damarcus Fields for it. After catching the ball at the 4, the 6-4, 225-pound Humphrey dragged his 6-foot, 200-pound adversary into the end zone.

The play reminded many of Michael Crabtree’s 28-yard touchdown catch against Texas in 2008, which was fitting since Texas Tech honored that team during Saturday’s game.

A game-winning TD catch down the right sideline …