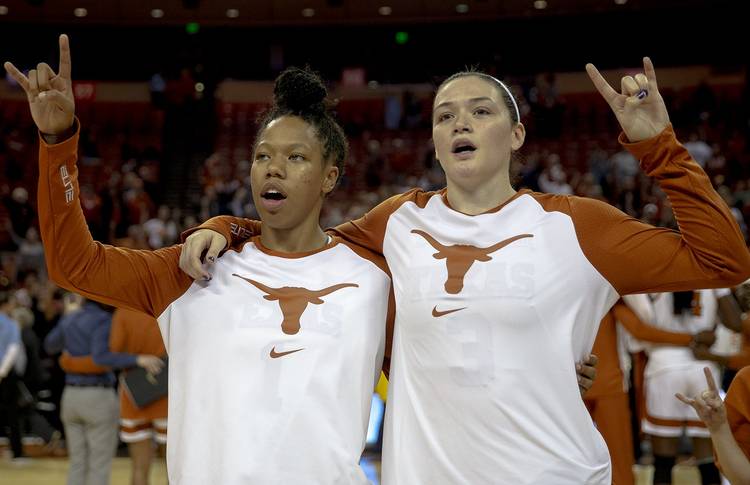 Texas guard Sug Sutton, left, and guard Danni Williams sing along to "The Eyes of Texas" after the win over Duquesne on Thursday. [NICK WAGNER/AMERICAN-STATESMAN]

Karen Aston put a season-opening victory over Duquesne under a microscope to learn something that wasn’t on the final stat sheet.

There were several promising aspects of a 78-41 victory Thursday night at the Erwin Center. From points and rebounds to assists and turnovers, the Longhorns led in just about every category.

Aston, in her seventh year at Texas, also wanted to know more about the makeup of her team. To put it bluntly, who would emerge as a team leader? Without Ariel Atkins and Brooke McCarty to lean on, the Horns are in the market for on-court leadership.

That’s exactly what Aston discovered in junior point Sug Sutton, a natural chatterbox who has taken ownership of the roster. The coach also gave credit to senior shooting guard Lashann Higgs, a silent shooter who led all scorers with 20 points.

The Longhorns hope for an encore performance when they take on North Texas on Monday night in Denton.

“Different players lead in different ways,” the coach said. “If Lashann just takes care of her business, that’s a huge amount of leadership because you know the young ones will want to follow her.”

Sutton has the team’s biggest bark, but Aston said seniors Jatarie White and Olamide Aborowa have let their voices be heard in practice.

“Sug has evolved in the last six months and is in the forefront of leading our team,” the coach said.

Quietly, Higgs shook off her big night by saying she wanted to concentrate more on defense than offense. Aston had blasted the team’s defense in practice and during an exhibition against West Texas A&M.

Defense was an asset against Duquesne. The Longhorns contested almost every shot the Dukes put up, limiting them to 26.8 percent shooting from the floor. Texas built a 24-7 lead after one quarter and never looked back.

“I’m just trying to do whatever I can do to help the team,” Higgs said.

Aston expects a much tougher game when the Longhorns take on North Texas. Coach Jalie Mitchell was a Texas assistant before moving to UNT in 2015.

“If I know Jalie, she’ll have her team jacked up and ready to play us, and they will be prepared,” Aston said. “We’re not in any position where we can take any team for granted.”

No. 11 Texas at North Texas

The series: Texas leads the series 12-0

About the Longhorns: Texas opened its season Thursday with a 78-41 victory over Duquesne. Higgs led the way with 20 points while sophomore Destiny Littleton came off the bench to score a career-high 15. Higgs needs 16 points to become the 44th player in UT history to reach 1,000 for her career. Aston was the head coach at North Texas during the 2011-12 season before moving to Texas.

About the Eagles: North Texas opened the season with an 82-35 home victory over Mid-America Christian. Bradley, named to the preseason All-Conference USA team, led the way with 19 points. The UNT defense held the Evangels to 17 percent shooting from the field and collected 60 rebounds along with a dozen steals. Coach Jalie Mitchell spent three years on Aston’s staff before being named head coach in 2015.