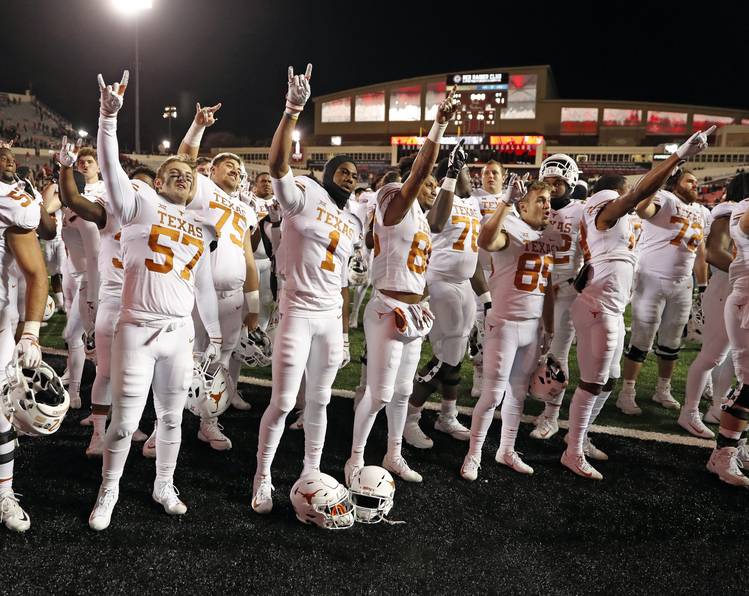 The Texas Longhorns sing "The Eyes of Texas" after a 41-34 win over Texas Tech in Lubbock in 2018. (Brad Tollefson/Lubbock Avalanche-Journal)

LUBBOCK — Texas never does anything easy. It’s well established at this point that these Longhorns are capable of beating anybody and losing to all just the same.

Why should a hot time on a cool Saturday night in Lubbock be any different?

The Longhorns watched a 17-point lead evaporate in the fourth quarter on the South Plains and found themselves in a pulse-pounding affair against Texas Tech.

Jett Duffey, the Red Raiders’ third-string quarterback when the season began, torched the Texas defense for 524 total yards and four touchdowns. And yet, UT players were all smiles and relieved afterward, thanks to Sam Ehlinger and Lil’Jordan Humphrey’s heroics in a 41-34 win.

Um, yeah, so about that defense: This is just everyday life in the Big 12. That’s why Texas coach Tom Herman stresses that the only goal each week is to go 1-0 against the opponent. In the Horns’ minds, mission accomplished. Seven regular-season wins so far is the program’s highest total since 2013.

“You don’t want to keep losing,” defensive end Charles Omenihu said. “Winning is the objective when you go on the field.”

Defensive coordinator Todd Orlando told the players all week they needed to fight their way out of a two-game losing skid. Tech averaged 7.3 yards per play, and it still wasn’t enough.

“Let’s get that swagger back,” linebacker Gary Johnson said. “He told us every day in practice, keep swinging, keep swinging, let’s punch our way out. When things get tough, don’t try to do too much. Just go back to your training.”

Stop trying to make the big plays and go back to basics, Orlando told the Horns. “Play how we’re coached to play,” Omenihu said. “Play hard, physical and smart, and good things happen to you.”

Texas (7-3, 5-2 Big 12) is still in the league championship race because it made one more play than Texas Tech — a Lil’ play, as it were. Oklahoma fans walked out of Saturday’s Bedlam game against Oklahoma State breathing a sigh of relief, and their Sooners gave up 47 points.

“That’s just how this game is,” OU defensive coordinator Ruffin McNeill told reporters in Norman. “In November, you’ve got to scrap.”

Herman steadfastly refuses to blame injuries for his team’s woes. The Horns reached their annual deductible weeks ago.

Safety Brandon Jones missed a second straight game with an ankle injury. Defensive end Breckyn Hager is playing through pain from a dislocated elbow. Cornerback Josh Thompson had a right ankle sprain, and Davante Davis had an “ankle sprain, knee pain. Did not return,” Herman said. P.J. Locke III had a toe injury.

Safety Caden Sterns suffered a concussion on a vicious blow in the second half. His status is unclear.

Herman downplays injuries so much, if he says someone has a hangnail, you better make sure they’re still among the living.

“You’ve got to put 11 guys on the field, and one of the pillars of the program is competitive focus,” Herman said. “Which means to perform and be ready when your number’s called.”

Chris Brown, Jalen Green and Joseph Ossai — players fans should expect to see in 2019 or 2020 — were on the field against Tech.

These Horns are woefully thin as it is. It’s a program still in rebuilding mode and needs to beef up through recruiting. That simply takes time. It’s not what fans want to hear, but that’s the reality of their situation.

Herman did go into detail about why he always defers if Texas wins the coin toss. The defense has allowed the opposition to score on the opening drive eight times in 10 games. More times than not, Texas starts out playing from behind. Tech went up 7-0 by scoring first Saturday.

Herman equated it to playing the long game. “You also get the ball first in the second half, so you’re assuring yourself mathematically, all signs being equal, that you’re going to have, you should have an extra possession in the second half,” he said. “Obviously we’re pretty good at making one-score games around here.”

Texas simply needs to hold things together two more weeks and then let the cards fall where they may.

Iowa State (6-3, 5-2) comes to Royal-Memorial Stadium this week for the season’s final home game. Running back David Montgomery, the Big 12’s second-leading rusher, was ejected in the third quarter against Baylor for his role in a fight.

According to Big 12 rules, Montgomery should be suspended for the first half of Iowa State’s next game, which is Texas. However, the Cyclones are appealing the ruling. His status will be cleared up in the coming days.

Headed to the wire, the Horns need to focus on themselves and worry about finishing strong. Humphrey put Texas in position to win against Tech. Others will have to pick up the load in the final two regular-season games.

As Herman said after the Tech win, “We know how to make them interesting, don’t we?”