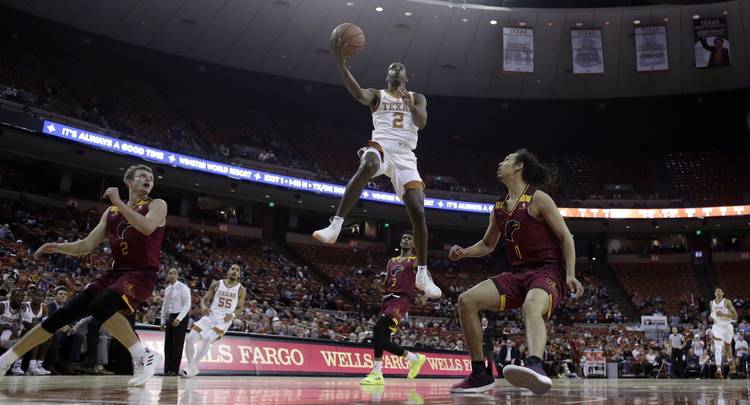 One week into the season, it’s too early to peg anybody for anything. West Virginia lost to Buffalo. TCU struggled against Oral Roberts. Kansas has looked like, well, Kansas.

So it’s not too surprising that Texas is thrashing about in fits and starts.

The Longhorns were all over the place Monday. A rather dull start, then a hot flash, a cooling- off period, a steady march to close things out. They’re about as unpredictable as anyone else this time of year.

The final result was a 65-55 win over Louisiana-Monroe inside a rather lifeless Erwin Center, which is far better than the alternative.

“The key is to win and grow,” UT coach Shaka Smart said. His Horns have done exactly that as their 3-0 record would attest.

Louisiana-Monroe (2-1) was without one of their best scorers. Still, it was a one-point game with 12:37 left before Texas went on a 16-0 run to close the door. ULM coach Keith Richard questioned his own strategy afterward. Smart may be doing the same thing.

“They’re a little bit of a hard team to figure out,” Richard said of the Longhorns. “Obviously, great size. Obviously, talent. But are they a great driving team or are they a great post-up team or a great 3-point shooting team? What are they? I think that’ll be their question as they move along.”

Smart has said numerous times this will be a work in progress. “It’s that time of year where everyone is still finding themselves,” he said after the win.

But a few things are clear. Texas needs to get more production out of sophomores Matt Coleman III and Jericho Sims. Both looked tight against the Warhawks.

Coleman had five points and just two assists in 32 minutes. Sims had three points and five rebounds in 14 minutes. Those are supposed to be two of their best players. Jase Febres has started all three games and averaged just six points.

“They’re sophomores who came in with a higher level of expectation,” Smart said. He then launched into the exact same monologue from two years ago when Kerwin Roach II and the now-departed Eric Davis Jr. were sophomores.

“It doesn’t just happen,” Smart said. “You still have to make it happen on the floor. They are better players than they were a year ago, but that doesn’t mean it’s just going to happen.”

Dylan Osetkowski finally got going after sputtering last week. The senior had 12 points and 10 rebounds and made things happen on sheer hustle. Osetkowski had a layup that did a few laps around the rim before falling true during UT’s big second-half run.

That three-point play generated a cheer that probably woke somebody in the upper deck — or even the front row. Players came leaping off the bench as the Horns took a 53-42 lead with 8:09 remaining.

“It was a quiet Erwin Center tonight, not too many fans there,” Osetkowski said. Smart told the players at halftime “to find our own energy.”

Finding a few more baskets wouldn’t hurt, either. Texas shot 41.9 percent overall but was 6-of-25 from 3-point range. At least players weren’t as gun-shy Monday as they were last Friday against Arkansas. If the open shot is there, you better take it or risk Smart’s wrath.

“He actually gets mad if you don’t shoot the ball,” guard Eli Mitrou-Long said. He’s Example A. Mitrou-Long got two open looks from the corner, took both shots and missed. Neither went in, but it was the right decision both times.

“The bottom line in college basketball,” Smart said, “if you get a wide-open 3-point shot, and that’s what the defensive continues to give you, you’ve got to have the ability to step up and shoot them.”

Better yet, the guards should get it to Jaxson Hayes a little more. Maybe a lot more.

Again, it’s early, but the 6-foot-11 freshman has something. It’s obvious the way he gets up and down the floor, the way he moves on slip screens for dunks or the way he got two blocks on three defensive possessions. Hayes finished with 11 points and five boards.

At one point, he slapped the glass backboard so high and so hard, it left a handprint you’d normally see at a crime scene.

“He’s a very good layer, that’s pretty impressive right there,” Osetkowski said. “I tell him every day that he doesn’t realize how good he is.”

The Longhorns haven’t yet realized what they or how good they might be, either. It just takes time.