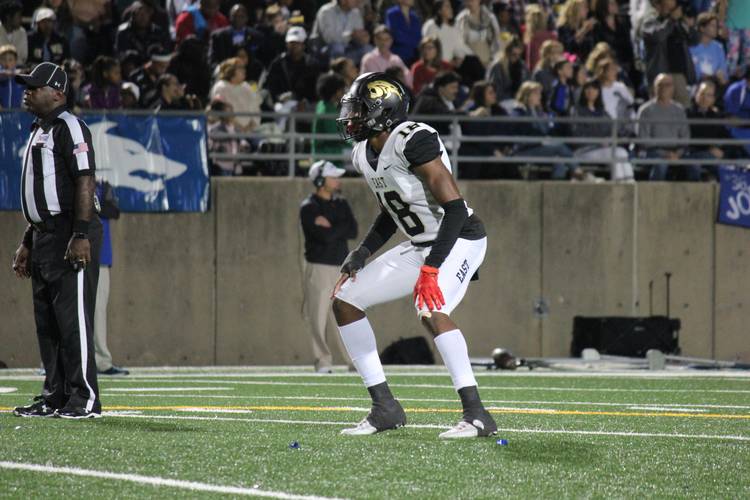 The playoffs start for the 11-man football teams across the state of Texas. The Longhorns hold 20 commitments in the 2019 class with just over a month remaining before the early signing period starts on Dec. 19. Tom Herman’s program expects most of those prospects to sign on that day, much like in 2018 when 19 of the Longhorns’ then-21 commitments signed early.

We’ve watched 15 of the 20 commitments in-person this season. We ranked the performances of the first nine in September. That number will grow to 16 of 20 on Thursday when Cuero and four-star wide receiver Jordan Whittington starts the playoffs against Pearsall at Alamo Stadium in San Antonio. The group is the seventh-ranked recruiting class in the nation. Texas signed the third-best class in 2018.

Sweat recorded four sacks when I saw him live on the road against A&M Consolidated. His Huntsville team grinded out a victory thanks to the defense and timely fourth-quarter possessions. Sweat even contributed as a blocking tight end down the stretch. He’s the most underrated commitment in Texas’ class and should be a four-star prospect on recruiting sites. He’ll fit perfectly into UT’s three-man defensive front. Think Malcolm Roach with more natural athleticism.

Johnson led a game winning drive as time expired at home against Vidor. It was a gutsy effort from the four-star quarterback with his legs and his arm. He’s a true dual-threat who enjoys threatening defenses with his legs as much as he likes airing it out. He’s asked to do more with his legs in the Port Neches-Groves offense and he’s the best runner Texas has recruited at quarterback under Herman. He’s not as fast as Casey Thompson, but he’s more powerful. Johnson is a natural leader who wants the ball and that showed against Vidor.

Gbenda is a true sideline-to-sideline linebacker who is at his best when he’s allowed to chase down running backs. He’s also solid in coverage against running backs and tight ends. He made a handful of open-field tackles against Morton Ranch and led his team in stops. He also recorded two tackles for loss, including one sack. He’s not a big guy in comparison to fellow linebacker commit De’Gabriel Floyd, but he’s a fast player who should excel against Big 12 offenses.

Caldwell was injured with a shoulder tear when I saw Alvin fall to four-star 2020 offensive tackle Chad Lindberg and Clear Creek. Caldwell returned for senior night, but his team didn’t make the playoffs. His focus is now on getting bigger and stronger before arriving on campus next summer. He plans to sign in December.

#Hookem commit @PPowell_ with a strong first half including a TD throw. pic.twitter.com/i4tCoMlzUx

Powell plays quarterback for Permian and in true West Texas fashion he wears No. 25. It looks odd watching a quarterback in a running back’s number, but that doesn’t mean Powell can’t throw. He’s listed as an athlete and stated after the game that he wants to begin his career at quarterback. He tossed three touchdown passes in the loss to Midland Lee. His pure athleticism was on display and there is no doubt that a transition to wide receiver could be successful if quarterback doesn’t work out.

Owens is the real deal. He slipped under the recruiting radar as a junior and in the offseason before his senior year because he didn’t attend the elite camps like The Opening or the Under Armour All-American Series. The four-star is a big, rangy safety with coverage skills. He’s also a thumper who is not afraid to blitz the quarterback and help against the run. Owens will be a member of the Fabulous 55 when it’s updated in December.

Texas 65, Louisiana-Monroe 55: The Horns? ‘They’re a little bit of a hard team to figure out’