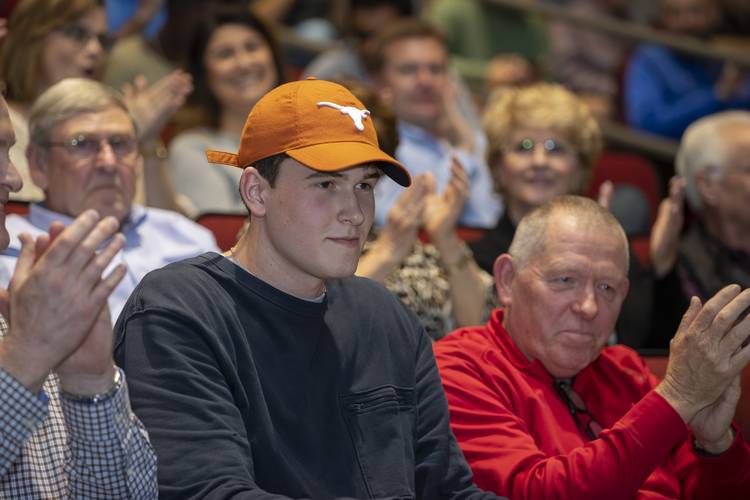 Westlake's Will Baker receives a round of applause from friends making his announcement to commit to University of Texas Longhorns basketball on Thursday at Westlake High School. [JOHN GUTIERREZ / FOR STATESMAN]

Would you rather recruit potential stars who are going to jump into the NBA draft after one season? Or would you rather assemble a roster of talented athletic players that meld into a team for multiple years?

“That’s really the foundation,” Texas coach Shaka Smart said of the veteran approach, “but certainly, if you look at college basketball, you need to have talent, too.”

At the moment, Smart’s current team doesn’t have a player projected to jump into the NBA draft next summer. The three players Smart signed on Wednesday could help the Longhorns build a stronger foundational base.

Will Baker, the 6-11 big man from Westlake, is the local headliner. Guard Donovan Williams, a 6-5 guard from Missouri City, and Kai Jones, a 6-10 forward from New Hampshire, are both considered four-star signees. The class is rated 11th nationally by 247Sports.

By NCAA rule, Smart was prohibited from talking about any of his recruits until they signed a national letter of intent. After those signatures rolled in, Smart said Wednesday, “Three very, very high character individuals.”

“Three guys who are just getting better and better as basketball players and guys we think will be a great fit for our program, both in the short-term and also the long-term.”

It’s clear those on the current roster are thinking long-term, too. All players are typically responsible for showing recruits a good time while on their official recruiting visits. It’s part of the sales pitch.

The current roster has only two seniors — guard Kerwin Roach II and forward Dylan Osetkowski. There are 11 players projected to return next season. The team is only allowed 13 scholarships, so someone else will have to depart. Attrition usually occurs naturally, mostly via playing time.

What UT fans will see this season is likely what they’ll see next year, too. That’s why it’s imperative the current underclassmen help Smart grab as much talent as possible.

Sophomore guard Matt Coleman III went the extra mile with Baker, who spoke last week about the impression that made on him. “I’m really looking forward to playing with Matt Coleman,” Baker said at his UT announcement ceremony.

“When I played, I just looked up to the coach,” Smart said. “Most guys, the No. 1 group they look to is what will be their peer group. We have a lot of guys on the team right now are givers and care about other people outside of themselves.”

Baker will draw comparisons to Allen and Bamba on size alone. However, he’s not considered to be a sure-fire one-and-done player for the Longhorns, like Jarrett Allen and Mo Bamba.

“Now he doesn’t necessarily have as much length or the same athletic gifts as those athletic guys had,” Smart said. “But what Will has at his size is really, really unique in that he’s really gifted around the basket and finishing and being able to make plays.”

Smart said Williams is getting better with his club team and high school team. “His trajectory is what we want,” Smart said. “He can do a lot on the offensive end, and he has a gliding quality to him which is unlike anyone on our team.”

Jones had narrowed his choices down to Texas, Baylor and Florida State. “I’m not always right on these things, but I got a feeling he’s going to be a special player,” Smart said.

It took Bamba leaving UT to realize what he had with the Horns. Smart said Bamba recently attended a UT home football game, and when the two walked onto the field at Royal-Memorial Stadium, the ovation the 7-footer received was overwhelming. Money aside, it’s just not the same playing for the Orlando Magic.

“When he is going through the tougher times, a couple of times, he said, ‘Well, what if I was there,’” Smart said. “I said, ‘Mo let’s not even talk about that.’”

The program has moved on. Smart’s plan is for the current Longhorns should be here a while.