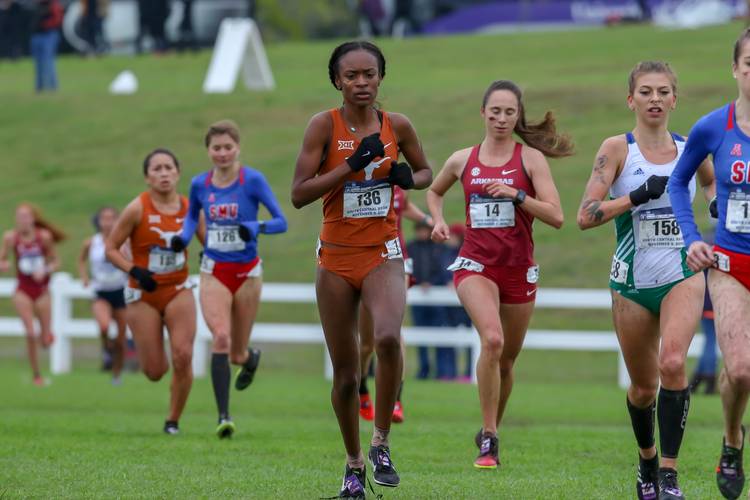 Ask Destiny Collins how many miles she’s run in her lifetime and it may take a few seconds to get a response.

Collins, who’s been a competitive runner since middle school, knows she’s covered more miles with her feet than with her car. To be fair, though, the grey Hyundai Elantra that she’s nicknamed “Trey” was just purchased by her parents this summer.  So, multiply the miles run in high school and factor in the work she’s done as a Longhorn and the Texas junior might be underselling herself when she guesses “10 to 12,000 miles.”

Collins will add six kilometers — or roughly 3.7 miles — to her odometer Saturday morning when Texas competes in the NCAA cross-country championships.

“(We’re excited) to show everyone what Texas is about and show we’re a good team,” Collins said. “We’re a little scared and excited about the weather; it’s going to be really cold. We’re just excited to run fast.”

Texas is sending both its men’s and women’s squads to the championship meet in Madison, Wisc. The men, paced by Alex Rogers, John Rice and Sam Worley, is looking for its fourth top-10 finish since 1992. The UT women won a national title in 1986 but haven’t cracked the top 20 in the past two decades.

With a high of 32 degrees in the forecast, Saturday’s race will be run at the Thomas Zimmer Championship Course. The Longhorns got a taste of that course at the Wisconsin Invitational in September.

“It’s a challenging course with some hills and elevation changes, but the women on the team have trained hard all season to be ready for Saturday’s meet and they have a good familiarity with the course going in,” UT women’s coach PattiSue Plumer said. “I’m confident they’ll be ready to execute a successful racing strategy.”

The Texas women have not produced an All-American since Marielle Hall in 2013. Collins represents the team’s best shot at a top-40 finish.

Collins has been UT’s top finisher in each of the six meets she has competed in this fall. She took home titles at shorter races hosted by Texas and Rice. She was fourth at the Big 12 meet and seventh at UT’s regional competition with times of 20:06.7 and 20:46.5.

“I’m feeling really good,” Collins said. “I think it’s a way better season than last year and even better than the year before. I think I’m going in the right direction and constantly getting better each meet.”

Collins was raised by Naval parents in California. She was a highly-rated recruit when she chose Texas over Baylor, Oklahoma State and USC, but she struggled during her first year on campus. Collins now thinks she spent too much time as a freshman comparing herself to other runners on social media. She rebounded after a strong summer of training.

As a sophomore, she recorded her career-best time of 20:05.4 at the South Central Regional Championships. Seven times, she was the first Longhorn across the finish line in all seven of her cross-country races. Her six-kilometer time dipped to 20:58.2 as she finished 134th at her first NCAA championship, which was held in Louisville. One year later, Collins will get another shot at All-American accolades.

“If I can just come close to running close to a PR, I think that will get me into an All-American finish,” Collins said. “Really putting it all out there on the track or on the course, I think will really help me accomplish my goal.”