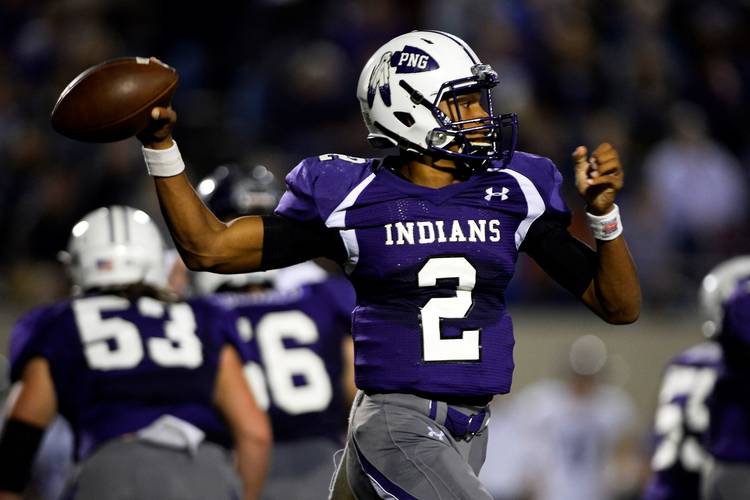 Seven of the 11 in-state commitments of the 2019 cycle made the playoffs, while both 2020 pledges reached the playoffs with relative ease. The out-of-state commits started playoffs in previous weeks. A handful of future Longhorns possess a real shot at a title run. It’s win or go home for every player left in prep football across the country.

In-state pledges Marques Caldwell, Tyler Johnson, David Gbenda and Peter Mpagi missed out on the playoffs. Chris Adimora and his Mayfair squad lost in overtime to Pacifica last week. De’Gabriel Floyd and Westlake Village lost in the first round of the California state playoffs.

Whittington returned from injury late in the season and helped Cuero secure a district championship. The future early enrollee scored as a rusher, receiver, defensive back and returner in the regular season.

Permian lost in its last game of the regular season to rival Midland Lee. Powell threw three touchdown passes in the loss and says he’ll start his career at Texas playing quarterback.

North Forest made the playoffs despite a 4-6 record. North Forest does enter the contest on a three-game winning streak.

Huntsville won a district championship and Sweat should be in line for defensive MVP honors.

Plano East finished the year 5-2 in district and face a Sachse team it beat 29-7 in Week 3.

Temple is on a two-game losing streak heading into the playoffs. Wiley is the starting quarterback for the Wildcats.

The four-star quarterback became his high school’s all-time leading passer in the win over Dayton a month ago and hopes to lead another long playoff run for the Indians.

Watson and his Grayson teammates are 9-2 entering the second round of the Georgia state playoffs.

Chandler is on a 11-game winning streak after opening with a loss to Centennial (Calif.) in a neutral-site game. Liebrock has 48 catches for 592 yards and eight touchdowns in 12 games. This is the third round of the playoffs.

Jones is 10-1. Defensive stats were not available for Tillman.

Millwood is the defending Class 2A Oklahoma state champions and is 11-0 entering the second round of the playoffs.

Buford is 9-2 entering the second round of the playoffs.

Trinity Catholic finished the regular season at 8-2 and is in the third round of the playoffs.

Card and his Cavaliers are 9-1. The Cavaliers reached the title game in 2017 with Card starting at wide receiver, though he played quarterback in the loss to Allen due to an injury.

O’Connor is undefeated and a real threat to Lake Travis in Region IV of the Class 6A Division I playoffs.