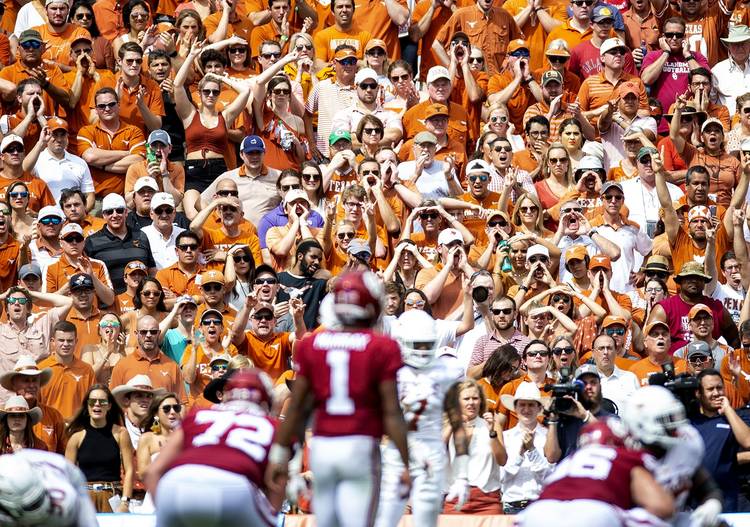 Texas fans make noise as Oklahoma sets up a play in the red zone during an NCAA college football game at the Cotton Bowl in Dallas, Texas, on Saturday, Oct. 6, 2018. [NICK WAGNER/AMERICAN-STATESMAN]

Any good Texas tailgate party has three key necessities — food, beverages and antacids. By game’s end, you might feel sick, exhausted or overjoyed.

Texas coach Tom Herman mused in August that “we’re in the entertainment business,” and that’s never been more true than this season. These Longhorns stage one heck of a show each week.

Nailbiters are the norm as No. 15 Texas continues its climb back to national relevance and into Big 12 title contention. Next comes No. 16 Iowa State for a Saturday night special at Royal-Memorial Stadium.

If fans need to watch the fourth quarter by peeking through their fingers, that’s OK, too.

“Man, I have no clue,” defensive tackle Chris Nelson said. “We say it all the time. Why can’t we just end the game? We’ve always got to make it close.”

The Longhorns (7-3, 5-2 Big 12) and the Cyclones (6-3, 5-2) both have their own paths to the Big 12 championship. Let’s call this a semifinal matchup. Chances are good this will be the most-watched live sporting event on Longhorn Network since it went on the air in 2011.

“What an awesome opportunity, especially for our 26 seniors to be honored on Senior Night as a top-25 team in the country,” Herman said.

Awesome is an understatement when judging these games this season. It’s mostly because the Horns are good enough to beat anyone or lose just the same. Texas has enough firepower to beat anyone on the schedule but not enough to pull away and cruise to the finish, like Alabama or Clemson.

Eight games have been decided by seven points or less, a new school record. That includes the last six in a row, all decided in climactic hold-your-breath fashion.

“I’ve counted it, too,” Herman said. “It’s a dose of reality to where I think we know that this is who we are. We’re overachievers at this point a little bit. Every game is going to be close, especially in this conference. You want to talk about parity, this conference is unbelievable.”

Two weeks ago, West Virginia won on a two-point conversion with 16 seconds left.

“I think at one point and time, every kid admired Texas or just understood the dominance Texas has in the college football world,” said receiver Jerrod Heard, a senior likely to get a thunderous pre-game ovation from fans. “Everyone comes with a different juice, a different edge to beat the University of Texas.”

The Horns have grown accustomed to playing tight games. They didn’t start that way, though. This was a program that once folded upon getting punched in the mouth. Under former coach Charlie Strong, the Longhorns lost by 18 points or more 11 times from 2014-16. Herman has lost by double digits only twice — a 17-point loss at TCU and 10 at home against Maryland, both last year.

In Herman’s 23 games at Texas, 13 have been decided by seven points or less. The average Texas game under Herman is decided by 7.1 points. Essentially, every game is decided by one possession.

The Horns started 2018 with an embarrassing loss to the Terrapins for a second straight year. That day at FedEx Field, Texas players were tentative, too afraid to make a mistake, too uptight to play loose. The next week back home against Tulsa, they went into a shell when Herman chewed them out at halftime.

The USC game on Sept. 15 was a moment of truth. In front of a school-record crowd at DKR, the Trojans jumped out to a 14-3 lead. Then Humphrey scored on a dazzling 47-yard touchdown catch, and safety Brandon Jones led the charge on a goal-line stand. From there, the rout was on as Texas scored 34 unanswered points and won 37-14.

The next week, Texas ended TCU’s four-game winning streak in their series. It was so bad, Texas had not even held a lead in a game over TCU since 2013. The wins and confidence started to compound.

“Listen, every game it seems in this league is going to go down to the fourth quarter,” UT defensive coordinator Todd Orlando said. “We’ve really had one comfortable win around here, and that was SC where we could sit down and enjoy it a little bit. Every other one has been as close as could be — good or bad.”

Nobody played well against Oklahoma State as Texas saw its six-game winning streak snapped. The West Virginia loss proved to be a gut-check moment. “I think we were psychologically maybe on some shaky ground” after those losses, Herman said.

Despite blowing a 17-point lead against the Red Raiders, the Horns never seem to doubt themselves. Quarterback Sam Ehlinger got the offense into position, just like he did against OU. The 29-yard strike to Humphrey, who high-pointed the catch and fell into the end zone, took everyone’s breath away.

“You see we’ve got a lot of swagger,” Omenihu said. “You see it in Sam, bobbing his head to the music before the snap. You see it with LJ. He catches the ball and just stares at the guy, like ‘What’s up?’ You see it with me doing home-run swings (against OU).

“It’s just an attitude,” Omenihu added. “When you have that confidence over and over again and you see it, it’s like, why wouldn’t you want this continuous feeling?”

Iowa State has all the tools necessary to beat Texas.

Freshman quarterback Brock Purdy has led the Cyclones on a five-game winning streak. Receiver Hakeem Butler could have easily been a semifinalist for the Biletnikoff Award. Coach Matt Campbell’s club has the best run defense in the Big 12.

“We’ve faced some good defenses this year,” Ehlinger said. “They’ve done some excellent things this year, so it’ll definitely be a challenge.”

Since it’s a 7 p.m. kickoff, business may start picking up around 9:30 p.m. By that point, pull your seatbelts tight and keep all hands inside the vehicle at all times. Objects do tend to come loose.

“What we saw (on film) probably from a team could be totally different,” Heard said. “Everyone wants to beat Texas.”