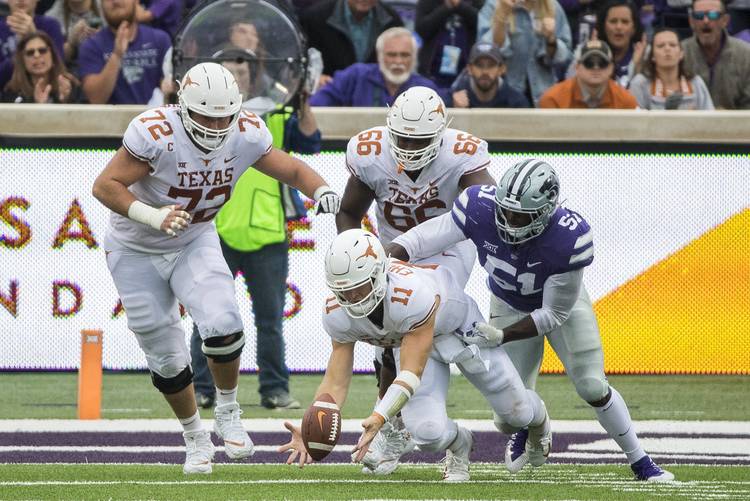 Andrew Beck knew he was misquoting John Heisman on Tuesday.

Beck, Texas’ senior tight end, was talking about fumbles when he cited Heisman — the Hall of Fame coach for whom college football’s biggest individual trophy is named — as saying, “It’s better to die a young man than to fumble the football.”

“That’s not going to be exactly right,” Beck quickly conceded. But he wasn’t far off. “Gentlemen,” Heisman is attributed to have said, “it is better to have died as a small boy than to fumble this football.”

But whether we’re going by Beck or the history books, the sentiment is the same. The Longhorns are preaching the importance of holding onto the football. Only three teams in the country have committed fewer turnovers than Texas. But Kansas is leading the Big 12 in forcing turnovers.

Texas has fumbled the ball 12 times this season but has lost only five of them, and one of those was credited to offensive lineman Samuel Cosmi on the last-play series of laterals against West Virginia. Texas has thrown three interceptions. For only the second time since 1996, the Longhorns have finished five games without committing a single turnover.

Sophomore quarterback Sam Ehlinger has established a new conference standard with his current streak of 295 passes without an interception. Freshman running back Keaontay Ingram has had 136 touches but hasn’t lost the ball once. Tre Watson hasn’t turned over the football in 128 carries, going back to UT’s season opener. None of the receivers have lost a fumble, either.

“That’s probably the biggest improvement on our offense, in my opinion,” receiver Collin Johnson said. “Coach (Tom) Herman always says that ball’s more important than all of us. That ball is the team. We’ve got to put our bodies on the line and protect that ball with our lives.”

So, what has changed over the last year? On Tuesday, the Longhorns said that practice has made perfect.

In terms of fumbles, Beck said that running backs coach Stan Drayton has taught all of UT’s offensive players about the fundamentals of carrying the football. Junior receiver Lil’Jordan Humphrey said players who lose a fumble must do “Longhorn reminders,” which usually consist of air raid drills while holding two footballs. The running backs, Watson said, go through a bunch of ball-security drills and are always holding the ball “high and tight.”

“They put a big emphasis on protecting the football,” Watson said. “That’s really what it is. We’ve been working it and they stress it in practice and it rolls over to the game pretty well.”

Kansas has forced 25 turnovers — 14 interceptions and 11 fumbles. Only Ohio (29), Utah State (28), Georgia Southern, Troy (26) and Syracuse (26) have more. Oklahoma committed two (one fumble, one interception) in last week’s win over the Jayhawks.

“They’re nobody to take lightly,” Beck said. “They have a lot of really good players and they’ve got a very veteran group, especially on defense. With situations surrounding that program right now, they’re going to be playing hard. We know that going into it.”