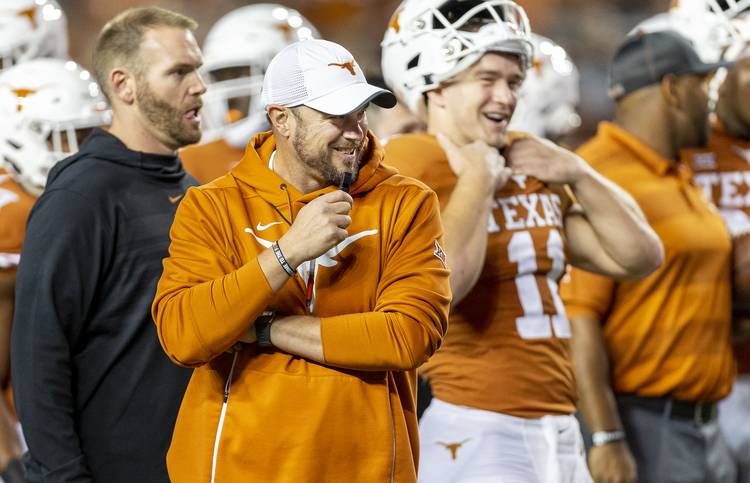 Texas’ 2019 recruiting class grew to 22 prospects on Wednesday night when three-star JUCO defensive end Jacoby Jones pledged to the Longhorns over 16 other offers. He de-committed from Oklahoma on Nov. 13 and took a visit to Texas for the Iowa State victory. The 6-foot-4, 250-pounder is the No. 1-ranked strong side defensive end from the JUCO ranks. Texas’ recruiting class ranks seventh in the nation and first in the Big 12.

Skill set: Jones is a big-bodied defensive end with the athleticism to get after the quarterback. He recorded 21 tackles, four tackles for loss and 3.5 sacks as a freshman at Butler C.C. The Missouri-native is strong off the edge and is powerful enough to handle double teams at the point of attack. He’s strong against the run and the Longhorns need big, powerful defensive ends to replace the three starters set to run out of eligibility after the 2018 season.

Immediate impact: Texas needed an instant-impact player off the edge with Breckyn Hager and Charles Omenihu departing after this year. Jones doesn’t need to be an all-conference performer right when he steps on campus, but he needs to provide depth and competition at a position. He’ll role will grow as he gains the trust of assistant coach Oscar Giles and defensive coordinator Todd Orlando. Former JUCO product Gary Johnson followed a similar path at linebacker.

Fitting into the program: There is plenty of out-of-state flavor in the 2019 recruiting class and Jones should fit right in with the program and the scheme. He’s an ideal fit for the odd-man front deployed by Texas’ defense because of his body style and versatility. Jones shouldn’t face the shock most incoming players deal with in year one because of his age and physical maturity from the JUCO ranks. Jones is the 11th out-of-state commitment in the class.

Recruiting at the position: Jones joined three-star high school products Peter Mpagi, T’Vondre Sweat and Myron Warren. Jones is the most likely to contribute early because of his experience and age. Don’t expect the Longhorns to pursue more targets at defensive end and its looking likely that Texas will pass on the defensive tackle position in the class with no legitimate targets currently on the board. Texas signed two nose tackles in 2018 and wanted to focus its attention on the edge in the 2019 cycle.

On Thanksgiving, the Texas men face ‘a terrific early-season litmus test’ vs. No. 7 North Carolina