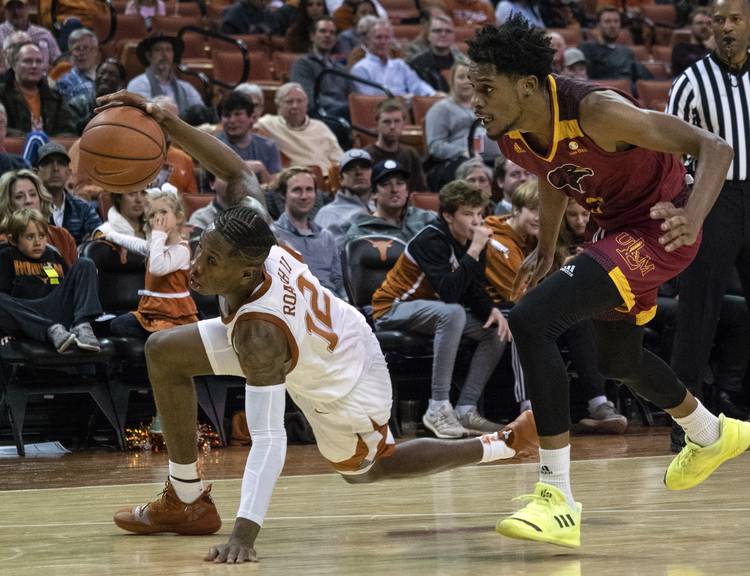 This Thanksgiving, Texas guard Matt Coleman III is thankful the Longhorns are hitting the holiday road.

A trip to Las Vegas always sounds good this, or any, time of year. Maybe a date with No. 7 North Carolina (5-0) is just what this team needs to shake things up and get the offense going.

“I think it might just be an Erwin Center thing,” Coleman said of UT’s early-season sporadic shooting. “I don’t know what it is. We’ve got to break the Erwin Center curse or something.”

The Longhorns have started this season just like the previous one. Coach Shaka Smart’s club is off to a 4-0 start and facing a high-profile ACC powerhouse in a neutral-site game.

Texas plays North Carolina at 6:30 p.m. Thursday as part of the Las Vegas Invitational. Then UT will play either Michigan State or UCLA on Friday at Orleans Arena.

“This is a terrific early-season litmus test just to see where we are,” Smart said.

Last year, Texas actually ran up a 16-point lead on No. 1 Duke with 11:09 remaining. The Blue Devils, who had four of the top-10 ranked freshmen in the nation, turned it on down the stretch. Marvin Bagley III finished with 34 points and 15 rebounds in an 85-78 win.

Sure, it was against the top-ranked team in the country, Coach K, national TV, the whole bit. The Horns knew it was a huge missed opportunity.

“Since this summer, we’ve shown that film countless times, at least the last four or five minutes about what we could’ve done to close that out,” senior forward Dylan Osetkowski said. “That’s been a big emphasis for us.”

Things would go a lot smoother if the Horns could hit a few more shots. Texas has made just 29.3 percent of its 3-point attempts in the first four games. Granted, it’s early, but that ranks 294th nationally.

Hitting more 3-pointers and free throws were the two biggest points of emphasis this offseason. Smart made the guards hit 10,000 3-point shots during the summer. Some did even more.

“The bottom line in college basketball, if you get a wide-open 3-point shot, and that’s what the defensive continues to give you, you’ve got to have the ability to step up and shoot them,” Smart said after Louisiana-Monroe defenders let UT shoot away. Texas was 6 for 25 from long range.

Coleman said that if you had told him defenders would go under all ball screens, “our eyes would’ve lit up.” He’s 4 for 18 so far from 3-point range.

“We’ve been working on this all summer,” Coleman said. “This is a piece of cake. And then to get out there and play and it doesn’t happen, dang, what am I not doing right?”

The Horns don’t take bad shots necessarily. Their offensive flow and spacing is good. They simply aren’t making many. Smart’s club has stayed in and won all four games with defensive hustle, offensive rebounding and averaging just 11.5 turnovers per game.

Freshman Jaxson Hayes was named the Big 12 co-newcomer of the week for his exploits. He’s averaging 9.3 points and 6.0 rebounds. Freshman Courtney Ramey is asserting himself. This team needs more from Coleman and fellow sophomore Jericho Sims, but that will come.

If this club could get a few more shots to fall, Texas’ long-term outlook would brighten substantially.

Double up on the turkey, and when in Vegas, double down on 11. Just don’t double over if things go haywire against the Tar Heels.

“Definitely frustrating to see shots that you work on day in and day out not go in,” Osetkowski said. “I think the biggest thing is to continue to have confidence in your shot and not be flustered if two or three of them don’t go in.”