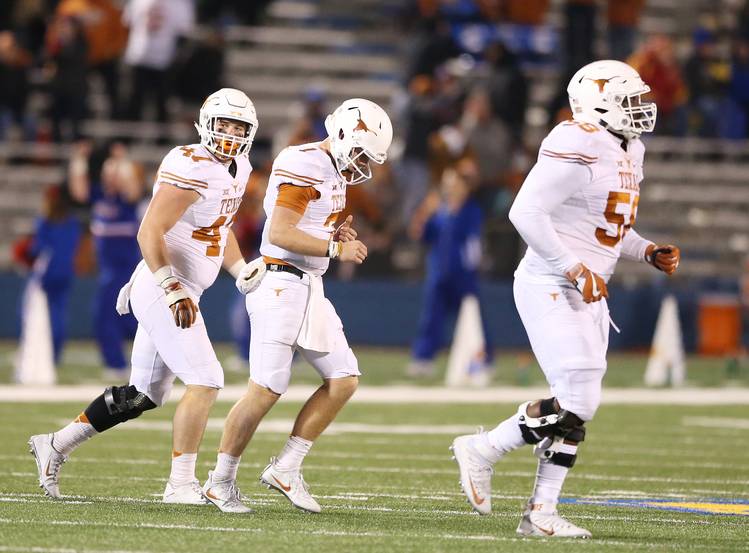 Texas's Shane Buechele, center, hangs his head as he leaves the field after throwing an interception to Kansas during overtime in Lawrence, Kansas on Saturday, November 19, 2016. Kansas beat Texas 24-21. DEBORAH CANNON / AMERICAN-STATESMAN

Texas defensive end Charles Omenihu sure seems like an elephant who never forgets. He can instantly recall what has happened on specific plays, who was holding him, what the atmosphere was like, even the size of the crowd.

“My high school games, they were loaded,” Omenihu said. “My (high school) All-American game was pretty decent. My Pee-Wee games, back in the day when I played left guard, No. 62.”

So what happened two years ago against Kansas?

Eh, not so much. “My memory of that day is kind of vague,” the senior said.

Omenihu doesn’t remember how the Longhorns felt invincible against the league’s longtime cellar-dweller? What about those six turnovers? What about Kansas winning 24-21 in overtime and essentially triggering coach Charlie Strong’s dismissal one week later?

You can’t fool senior defensive tackle Chris Nelson. “No, I’m pretty sure Charles remembers,” Nelson said. “Sometimes I’ll be watching college football games and there will be an upset. Only if y’all knew. Only if y’all new. Yeah, it was very low.”

Two years after one of the most embarrassing losses in school history, 14th-ranked Texas returns to Lawrence with a completely different outlook. Now, the Longhorns (8-3, 6-2 Big 12) aren’t scuffling along, hoping for bowl eligibility and struggling for respect. With a win on Friday, the Horns can clinch a spot in next week’s Big 12 championship game at AT&T Stadium in Arlington. UT hasn’t played for a league title since 2009.

Kansas (3-8, 1-7) is still Kansas, though. The Jayhawks have already fired coach David Beaty, who beat the Horns in 2016. It’s a program that’s won only four games the last two seasons.

Still, to Texas, Kansas represents a moment in time that changed everything.

“I feel like that program that went there, I feel like that was 50 years ago, not two years ago,” Texas coach Tom Herman said this week. “We’re so far past that point in our program, and no, there is no hidden significance of it.”

Sure, coach. If Texas had not lost that night, Herman may not even be in Austin. Strong likely would’ve held on to his job for a fourth season, and Herman probably would have jumped from Houston to LSU that following week, not to Texas.

Herman cannot appreciate how devastating that loss was to a proud UT program. He wasn’t there as then-athletic director Mike Perrin stood ramrod straight on the field showing no emotion. Herman wasn’t there in a cramped equipment room with Strong’s wife weeping off to the side. Strong himself barely knew what to say. Asked what the loss meant to his future, Strong said, “No idea.” He was shell-shocked.

Everyone — coaches, administrators, players, reporters, fans — knew the Strong era was over. The next day, the American-Statesman reported that Strong was on his way out.

“I’m not going to lie to you,” senior tight end Andrew Beck said. “I try to remove that one from the memory.”

Herman laughed at the idea that his players need to exorcise some ghosts on Friday. But they do.

Quarterback Shane Buechele, who started that chilly November night two years ago, admitted last week, “We all know what happened.” He said it’s good that the Horns have a chance to go back and make things right. “Let’s fix it and go get a win,” he said.

Buechele is likely to be on the sideline this time. Starting quarterback Sam Ehlinger had a light throwing schedule this week after aggravating his shoulder injury against Iowa State. But he’s expected to play and likely start.

Herman said he doesn’t care what motivates a player. “If it helps get you excited about practice, then great,” he said.

To Herman’s total credit, these Longhorns are tougher, stronger and more prepared than that group was two years ago. Last season, Herman’s team snapped a three-year losing streak. This year, Texas bounced back from an embarrassing season-opening loss and won six straight.

It’s a team that is one botched two-point conversion away from going 6-0 at home this season. It’s a program that snapped a two-game skid by winning a thriller at Texas Tech.

Had the Longhorns lost their confidence? “It was never lost, boss,” Omenihu said.

It’s also a locker room full of players excited — or at least willing — to have fun during a full-pad workout twice in the last two weeks of the regular season. Teams should be taking it easy now. Some previous Texas teams would sour on that idea, complaints would bubble up on social media and parents would grouse.

Not these Horns. Not anymore.

The defense had some bad form tackling against West Virginia and Texas Tech. So defensive coordinator Todd Orlando made the Horns strap up and battle in practice. If he just talked about tackling better without practicing it, “That’s phony, if you’re a coach,” Orlando said.

“When you don’t perform something well, you can hide behind it and say we’re going to do a better job on Saturday without I addressing it,” Orlando said. “That’s ridiculous to think you’re going to get it solved.”

Herman’s biggest success at UT may be in getting the players to buy into his 1-0 mentality. There’s no need in thinking about an Oklahoma or West Virginia rematch in Arlington if they can’t beat Kansas.

Kansas’ Memorial Stadium will likely be half-empty on Friday, so Texas needs to create its own energy. Running back Pooka Williams Jr. ran for 252 yards as the Jayhawks rang up 40 points on Oklahoma last week. “And that’s not their only success story this season,” Beck said.

Texas has far more riding on this one than pride.

It’s for a shot at the league title. It’s a chance to clinch a ninth-regular season win, something that hasn’t happened since 2009.

“I’m glad for you informing me of this,” Omenihu said. “But you’ve got to take care of what’s ahead of you. There ain’t no forward if you don’t take care of the present.”

Perhaps most important, for some seniors and juniors, it’s a chance to correct something that went so drastically wrong.

Somewhere down in Tampa, Fla., there’s a coach who probably wants to see his old recruits and players come out on top Friday.

“I wish the other guys, their senior years could’ve been like this, honestly,” Nelson said.