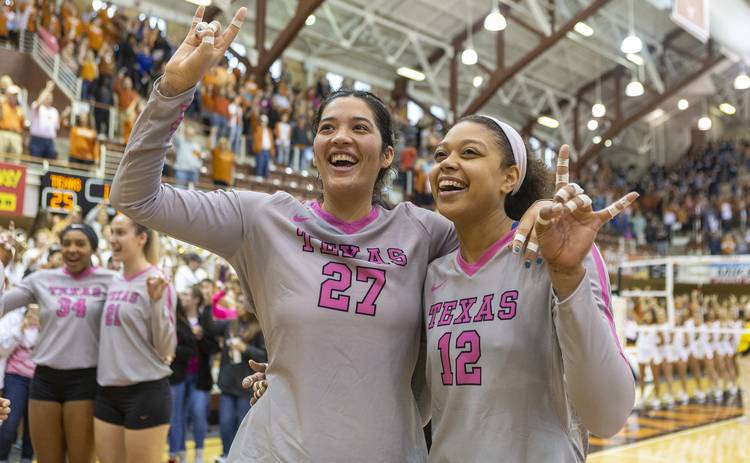 After their match against West Virginia on Saturday afternoon, Texas’ volleyball players will gather in front of their fans for a playing of “The Eyes of Texas.”

Front and center in this scene will be outside hitter Yaazie Bedart-Ghani and middle blocker Morgan Johnson. The only seniors on UT’s roster will embrace while putting their Horns up. Bedart-Ghani will probably use her right hand while Johnson raises her left.

This has been Bedart-Ghani and Johnson’s postgame routine since they arrived on campus. And as UT’s volleyball season approaches its final stretch, it is also a routine that is nearing its end.

“We hang out every weekend, and I see her every day at practice,” Johnson said of Bedart-Ghani. “She’s definitely been a constant friend for me that I’ve seen every day. It’s going to be weird having to talk over FaceTime or maybe only get to see her once or twice a year.”

Bedart-Ghani and Johnson’s friendship was founded back in 2014 when the future Longhorns met at an Under Armour All-America showcase that also featured UT junior Micaya White. (White would redshirt as a freshman in 2015 with a leg injury.) White and Johnson are products of the Dallas area and the same club program, but Texas had Johnson and Bedart-Ghani room together during their freshman year. That living arrangement gave the Longhorns their own version of the Odd Couple.

Ask a Longhorn to describe Johnson, and the word “goofy” might be used. Bedart-Ghani has a more serious demeanor. A proud Californian, Bedart-Ghani prefers hamburgers from In-N-Out. DeSoto-raised, Johnson opts for Whataburger. Johnson characterized herself as the loud roommate who is prone to playing her music and chatting on the phone. As for who is messier, Bedart-Ghani said both parties were guilty of turning dirty dishes into a staring contest.

Bedart-Ghani and Johnson, though, quickly found a middle ground. They both love the USA Network show “Psych.”

“It was my favorite show, and it was her favorite show,” Johnson said. “We kind of geeked out about it. From there, it created this bond that’s probably going to last the next 70 years.”

Bedart-Ghani and Johnson were roommates for two years, and Bedart-Ghani recalled, “We started developing some of the same mannerisms. It got to a point where it was kind of scary.”

“We responded (with) exactly the same word, tone, body language, all of that,” Bedart-Ghani said. “He was like, ‘Oh, no, you guys need to get split up because you’re scary.’ We still do it sometimes.”

On the court, Bedart-Ghani and Johnson’s bond has helped lead Texas to 103 wins and two appearances in the NCAA’s championship match. Johnson will exit Texas as one of the program’s all-time leaders in blocks per set and hitting percentage. A two-year captain, Bedart-Ghani has squeezed playing three different positions and a handful of big moments in the NCAA Tournament into her time at Texas.

This year, Johnson is averaging 1.79 kills and 1.05 blocks per set. Slowed by a back injury at the start of the season, a healthy Bedart-Ghani is contributing 2.5 kills per set. Her .351 hitting percentage ranks fourth in the Big 12.

Texas has compiled a 19-4 record this fall. Last week, the Longhorns secured their seventh conference championship in the past eight years.

Ranked fifth in the AVCA’s national poll, Texas will host the first two rounds of the NCAA Tournament next week. Thanks to an unexpected loss by No. 1 BYU on Tuesday, UT remains in contention for a top-four seed in the postseason. If they snag a top-four seed Sunday, the Longhorns could play up to four more matches at Gregory Gym.

So that means that Saturday’s senior day will not be Bedart-Ghani’s and Johnson’s last appearance at home. Both players will still be recognized during a postgame ceremony with their family and teammates.

“I think I’ll be emotional because it’s the day. They label it as our last regular-season home game,” Bedart-Ghani said. “It will be subdued just a little bit because it’s not actually my last home game. But it’s getting close.”