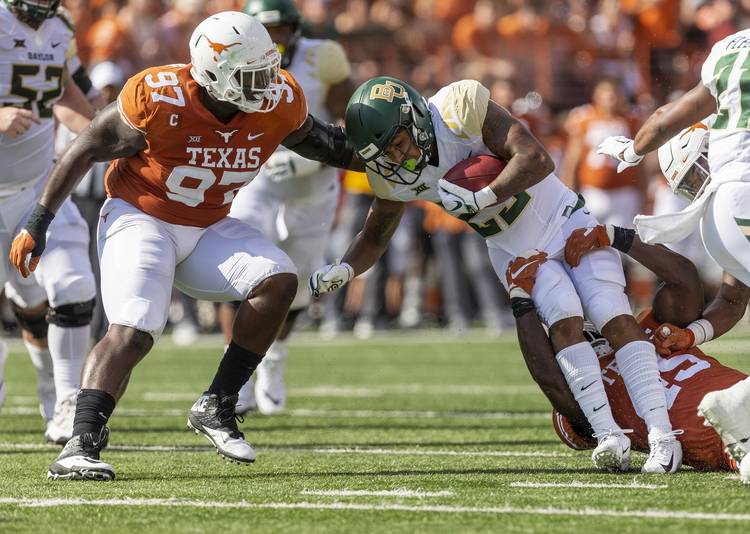 Here are five key matchups in the Texas-Kansas game to keep your eye on Friday:

Texas’ 42-27 win over Kansas last year was a career game for former UT defensive back Antwuan Davis, who intercepted two passes and scored on a 16-yard return. One year later, however, Jayhawks quarterback Carter Stanley is now Bender’s backup. Bender, a junior from Fort Lauderdale, has thrown 286 passes this season and has been intercepted only twice. Longhorns safety Caden Sterns has four interceptions this season, one away from setting a new freshman school record.

Nelson, UT’s 315-pound run-stuffing defensive tackle, should have a busy day. Williams is the Big 12’s second-leading rusher and is a four-time winner of the conference’s weekly newcomer award. The freshman is coming off a 252-yard game in last week’s loss to Oklahoma; Williams averaged seven yards per carry against the Sooners. “He’s nice. He’s the real deal,” Nelson said. “He got a quick twitch. The play could be designed to go one way but he’ll break it back the other way.” Texas has allowed only one opposing 100-yard rusher all season.

With a name perfectly suited for a safety, Defense leads Kansas with three interceptions and six pass breakups. He also has 40 tackles. When Humphrey, who’s 6-4 and 225 pounds, lines up in the slot, will the Jayhawks put the 5-11, 188-pound Defense to go up against him? Humphrey has 70 catches and is creeping closer to Jordan Shipley’s single-season receiving record of 1,485 yards — Humphrey, with 1,033 yards, is 453 yards away. His chances improve if Texas wins on Friday, as he’d need to average 151 yards a game to pass Shipley if the Longhorns have three games left (Kansas, the Big 12 title game and a bowl game). Texas coach Tom Herman recently called him the best player on an offense averaging 32.4 points per game.

Sims is Bender’s top target. The senior has 48 catches this season, which is 19 more than the next closest wide receiver’s number. Davante Davis, at 6-2 and 205 pounds, probably will get assigned to Kansas receiver Jeremiah Booker, who’s 6-2 and 212 pounds and leads the Jayhawks in touchdown catches; Davis was the primary defender against Iowa State’s Hakeem Butler last week because Butler is 6-6. So Boyd (6-0, 195) likely will get Sims (5-10, 176). Boyd is coming off three solid performances — no interceptions, but 15 tackles plus three pass breakups vs. West Virginia, a forced fumble and fumble recovery at Texas Tech, and a pass breakup and quarterback hurry vs. Iowa State.

Texas senior tight end Andrew Beck admitted to reporters that he was so awestruck by last week’s home crowd — the second-largest in school history — that he forgot a play during the Iowa State game. Friday will be a different story. The Cyclones had to play in front of 102,498 people on UT’s senior night. The Longhorns won’t have that problem in Lawrence. Kansas has drawn a TOTAL of 101,325 fans in its five home games, an average crowd of 20,265. The Jayhawks are 3-8 and this will be the morning after Thanksgiving. Can Texas create its own energy at Memorial Stadium?