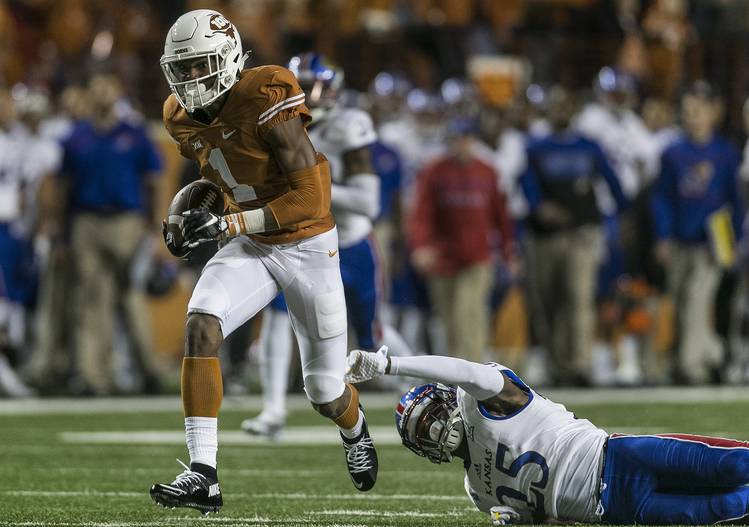 1. How long will it take Texas to score?

Texas has gotten off to a very fast start in each of the last three Kansas games. In 2015, Jerrod Heard and John Burt connected on an 84-yard touchdown pass on the Longhorns’ first snap of the game. Two years ago in Lawrence, Shane Buechele threw a short pass on the first play of the game to Jacorey Warrick, who turned that into a 75-yard touchdown. Last year, the Jayhawks tried an onside kick to open the game; Texas recovered, and then Buechele found Lorenzo Joe for a 49-yard touchdown. Will the Longhorns make it four years in a row with another quick score?

2. Who will win the turnover battle?

Only three schools — Georgia Southern, Army and Fresno State — have committed fewer turnovers than Texas, which has eight. Sam Ehlinger’s conference-record streak of passes without an interception is now at 295, and one of UT’s five lost fumbles was on a game-ending series of laterals. But on the other side, Kansas has forced 25 turnovers. Only five teams have forced more. In 2016, the last time the Longhorns played in Lawrence, they committed six turnovers in an overtime loss.

3. Who will get the bulk of carries for Texas?

In that 2016 game in Lawrence, D’Onta Foreman had a school-record 51 carrie. Neither senior Tre Watson nor freshman Keaontay Ingram will approach that, but who will get more touches? Over Texas’ past four games, Watson has 51 carries while Ingram has 50. It’s a good situation for both: Kansas is allowing 174.4 rushing yards per game — the second-worst mark in the Big 12 — and six players have run for 100 yards against the Jayhawks.

4. Will Texas do what OU couldn’t: Slow down Kansas?

The Jayhawks scored 40 points last week on Oklahoma, their second-best output of the season. As Texas defensive lineman Breckyn Hager and some naysayers will point out, Oklahoma has struggled on defense this season. Kansas, though, may have found its offensive stride. The Jayhawks will attack UT with a rushing attack led by Pooka Williams Jr.., this week’s Big 12 newcomer of the week after rushing for a school-record 252 yards against the Sooners. Texas ranks 56th nationally in points allowed (25.9 ppg). Will Texas hold Kansas under those OU numbers?

5. If they get the lead, can the Longhorns close out KU?

Texas has been outscored 105-55 in the fourth quarter this season. That includes a 21-point rally by Oklahoma and a 17-point rally by Texas Tech, though the Longhorns prevailed in both games with more-climactic-then-necessary scores at the end. Even in last week’s 24-10 win over Iowa State, Texas allowed a late Cyclones touchdown and then lost a fumble in the final 93 seconds. Will Texas avoid the fourth-quarter drama this time?