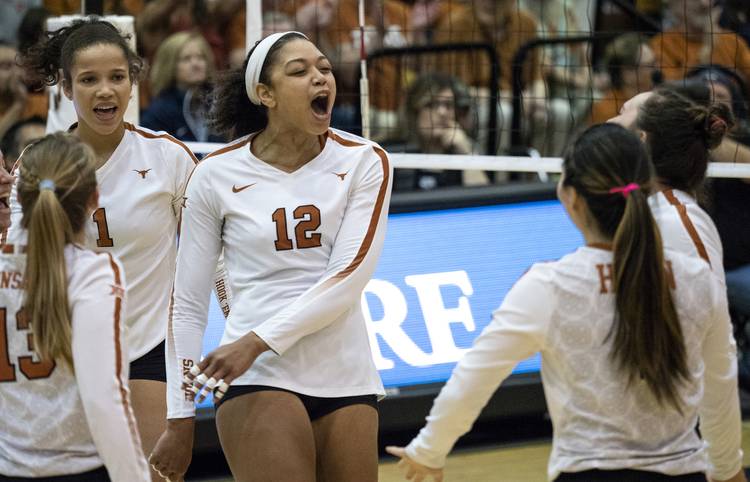 As a volleyball competition, Texas vs. West Virginia wasn’t exactly the most dramatic match of the season. As a celebration of another Big 12 championship and the successful careers of two seniors, Saturday could not have been better.

There were families and flowers, hugs and tears. Plenty of tears.

Morgan Johnson and Yaazie Bedart-Ghani were recognized on senior day, and the Longhorns defeated West Virginia 25-11, 25-22, 25-18 in front of 4,110 fans, extending their winning streak at Gregory Gym to 35 straight Big 12 matches.

Texas (20-4) closed the regular season as Big 12 champion for the 11th time with a 15-1 record and will play host to first- and second-round NCAA Tournament matches beginning Thursday or Friday. The Longhorns are angling for a ninth Final Four appearance in 11 years.

When it was over, many fans spilled onto the court, some posing for photos with the players and coach Jerritt Elliott.

“Coaching is a cool profession,” Elliott said. “I always say that. The development of the kids.”

Johnson said she was not going to cry after the match, but she couldn’t stem the flow.

“My teammates were crying, so I started crying,” she said. “It’s bittersweet, of course. So sad that it’s our last regular-season home game, but to be able to celebrate with Yaazie our careers is so special.”

Bedart-Ghani, the more composed of the two, said: “Morgan is a little bit more emotional in general than I am, but I definitely shed a few tears. I’m going to miss all the amazing people here at Texas.”

Johnson, a 6-foot-3 middle blocker, heads to the NCAAs ranked fourth in career blocks per set and fifth in hitting percentage at Texas.

Bedart-Ghani has displayed the versatility to play three positions in four years: outside hitter, middle blocker and opposite. She has often distinguished herself during the most important matches and has a .407 hitting percentage in the NCAA Tournament.

The Longhorns had their best hitting percentage of the season Saturday, .457, while limiting West Virginia to .190.

Now comes the NCAA Tournament. Elliott said he arranged the most difficult nonconference schedule of his 18-season tenure at Texas hoping to attain a top-four overall seed, which would enable UT to host a regional the second week.

Last year the Longhorns were the No. 6 overall seed and were sent to play at Stanford, where they lost the regional final to the host team in three sets.

“We thought if we could go 7-1, 6-2 in the preseason, we could potentially host if we take care of the Big 12,” Elliott told the Statesman in September.

Texas, which might need to beat BYU to become a regional host, did not maneuver into enviable position when it lost three nonconference matches, including two against Stanford, which is No. 1 in the RPI computer rankings. Even so, the Longhorns are No. 3 in the computer rankings thanks in part to wins against Kentucky, Florida and Oregon.

BYU, fifth in the RPI last week, beat Stanford early in the season and was undefeated until a loss at Loyola Marymount on Tuesday. BYU lost a star hitter, McKenna Miller, to a knee injury in early November.

“They had an injury, which should be a factor,” Elliott said. “They are not who they were before. We have a better strength of schedule, and a higher RPI. But I’m not on the committee. It sounds good when I say it.”