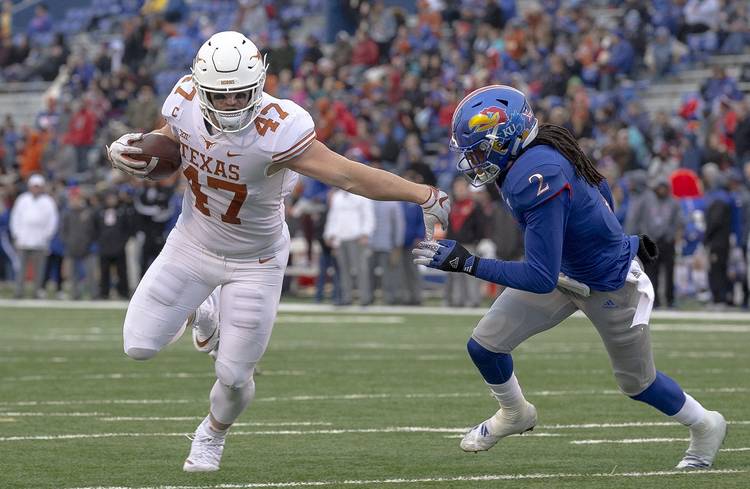 In each of its previous three games against Kansas, Texas scored on its first offensive snap. The Longhorns didn’t extend that streak Friday, but they did drive into the end zone on their first possession. Pinned at its 2-yard line by a Kansas punt, Texas marched 98 yards in 11 plays. That 11th play was a 26-yard touchdown catch by junior Collin Johnson.

On UT’s opening possession, quarterback Sam Ehlinger completed 6 of 7 passes. That one incompletion was a dropped pass by tight end Andrew Beck. Three of those passes were hauled in by junior Devin Duvernay, who Johnson said “is a great player. I respect him so much, just the way he approaches business each and every day.”

Johnson’s touchdown catch would stand as the only score of the first half. Texas faltered on an additional opportunity. Ehlinger’s Big 12-record streak of 308 passes without an interception came to an end when he was picked off in the Kansas red zone in the second quarter. On that same drive, Ehlinger misfired on a probable touchdown pass to a wide-open Beck.

Ehlinger and Beck tried again in the third quarter. On a play-action pass from the 5, Beck slipped out of the backfield, caught the ball and ran into the end zone.

Beck’s only other reception Friday set up an Ehlinger touchdown run with 1 minute, 2 seconds left in the third quarter. Beck has caught a pass in all 12 of UT’s games this season. Over Beck’s first three seasons at Texas, he had 12 catches.

Fresh off a 252-yard game against Oklahoma, Kansas freshman Pooka Williams Jr. entered this game as the second-leading rusher in the Big 12. But through three quarters Friday, Williams had run for only 32 yards.

On the second play of the fourth quarter, Williams finally broke free. A 57-yard score thwarted UT’s hopes for its first shutout since a 56-0 win over San Jose State during the second week of the 2017 season. It was also the second-longest run surrendered by the Longhorns this season. (Oklahoma quarterback Kyler Murray had a 67-yard sprint at the Cotton Bowl last month.)

Texas had been outscored 105-55 in the fourth quarters of its first 11 games. Williams’ long run and an interception thrown by Ehlinger on the subsequent possession did not put UT in a position to narrow that statistical differential.

Set up at the Texas 17, Kansas quarterback Peyton Bender attempted to find Steven Sims Jr. after the Jayhawks’ leading receiver had lined up in the backfield. Bender’s pass to the middle of the field was batted into the air by Texas junior linebacker Jeffrey McCulloch, who then rebounded the deflected football for the first interception of his career.

A return of 65 yards by McCulloch set up UT’s final score, a 34-yard field goal by Cameron Dicker with 10:57 remaining.

Kansas (3-9, 1-8 Big 12) would not go into its offseason quietly, and the Jayhawks sandwiched a recovered onside kick with Daylon Charlot’s 31-touchdown catch and Gabriel Rui’s 45-yard field goal with 1:37 left in the game. Facing a 24-17 deficit with no timeouts available, Kansas had to try another onside kick.

Rui’s attempt was snagged by junior receiver Lil’Jordan Humphrey, and Texas killed off the remaining time with three kneel-downs. Humphrey had a quiet day on offense with only two receptions and 25 receiving yards. His hands, though, came in handy on one of the game’s biggest plays.