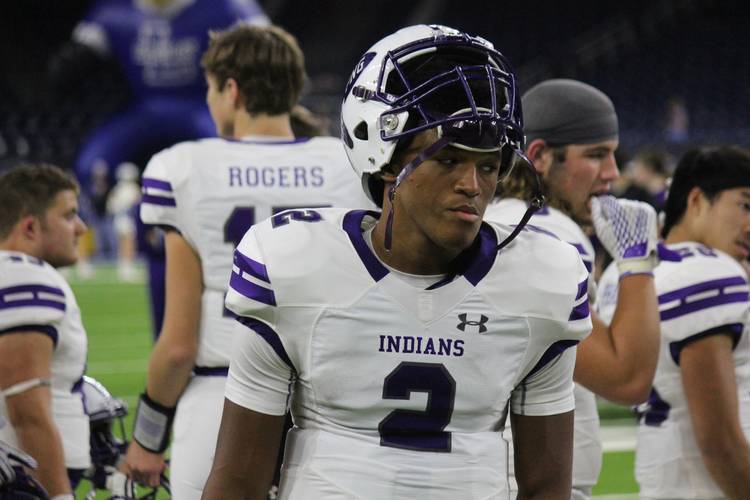 HOUSTON – Texas quarterback commit Roschon Johnson scored six touchdowns and accounted for 478 yards in Port Neches-Groves’ 50-28 area-round win over Lindale on Friday night at NRG Stadium. The four-star pledge ran the ball 19 times for 248 yards and four touchdowns. He completed nine of his 16 pass attempts for 230 yards and a pair of scores.

Playoff success is nothing new for the future Longhorn. Johnson is a three-year starter who is yet to lose a district championship or a playoff game before the third round. He’s a winner. He’s also a player who constantly faced doubt as a passer. Johnson doesn’t care what the outside world thinks of him as a football player, and he shouldn’t, but he still sees the improvements he’s made as a passer since first taking a varsity snap.

He was always the most athletic kid on the field. Now, Johnson is the most experienced.

“I’ve improved a ton from my sophomore year to now. I go back and watch film and I didn’t always make sound, smooth throws that I make now. I’ve come a long ways,” Johnson said. “This playoff ride means a lot because it is my last chance with these guys and in these colors. I was the young guy in the huddle as a sophomore in the playoffs without a ton of varsity experience. It’s different now.”

Johnson sees similar growth at the college level in the current Texas quarterback. Sam Ehlinger struggled at times his freshman season. Johnson is a student of the game and a long-time fan of the Longhorns. He committed to Texas in July of 2017. He saw the cracks in the offense. He’s now watching the improvement he expected to see under Tom Herman.

“I personally expected this growth from Texas this year because I know the type of culture coach Herman has at Texas and this is what happens. This is what to expect now and I can’t wait to be a part of it,” Johnson said after the win. “Sam’s maturity in the offense is evident. He’s smarter and more experienced after his freshman year and that’s the type of growth that experience allows for as a quarterback.

“He’s breaking records and doing things no one has done at Texas in a long time and I think it is because of his growth in the offense from a mental standpoint.”

Johnson’s teammate and 2020 offensive tackle offer Jaylen Garth is out for the season with a torn knee ligament. The 6-foot-4, 285-pound junior can play offensive tackle or guard. The three-star and future member of the Fabulous 55 won’t ever block for Johnson again at the prep level, but he openly admits the duo won’t be separated for long.

“Roschon is a stud,” said Garth after the win. “I wouldn’t mind blocking for him again. It’s safe to say the Longhorns are among my top schools.”

With Johnson suspended, Texas’ Jeffrey McCulloch responds with the play of the game